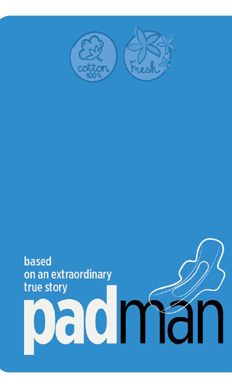 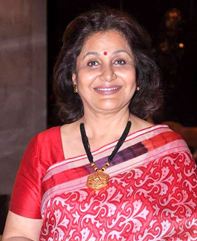 The concept for this film, Padman, is credited to Twinkle Khanna for the story that is based on the short tale in her book, "The Legend of Lakshmi Prasad". This story has been inspired by the life of Arunchalam Muruganantham a social activist from Tamil Nadu who revolutionized the concept of personal hygiene during the menstrual cycle in rural India by creating low-cost sanitary pads.

Incidentally, the film also shares the same premise as that of Phullu which was released in June 2017.

Set in rural Madhya Pradesh, Lakshmikant Chouhan (Akshay Kumar) a mechanic by profession and a loving and devoted husband to Gayatri (Radhika Apte) ensures that his wife leads a comfortable life by introducing small inventions to enhance her daily life.

But when he learns about the stigma and taboos that surround menstruation and the unhygienic methods used by women during this period, he is pained. So he embarks on a mission to make affordable sanitary pads. How he succeeds in his endeavour, forms the crux of the tale.

Lakshmikant's story is truly inspirational and writer-Director R. Balki leaves no stone unturned to magnify it for the large screen. Narrated in a linear manner and laced with light-humour, stellar performances and statistics-filled dialogues, this film conveys the strong message with ease and is entertaining from word go.

But the graph of the story is flat and the plot, laden with deus-ex-machinas and certain elements truly stretched a la Bollywood style especially Lakshmikant's invention and his speech at the UN, truly makes the film, "filmi". It loses the charm of a realistic, biographical film.

Akshay Kumar's portrayal of Lakshmikant Chouhan is sincere. He delivers on every front and is the soul of the film. You are with him during his struggle and obsession. He is aptly supported by Radhika Apte as his wife Gayatri. She is every inch the submissive, rural lady struggling to survive within societal norms. Their on-screen chemistry is palpable.

Sonam Kapoor as Pari the city-bred, tabla maestro and a freshly minted MBA, is a misfit and strictly mediocre. She walks through her role and what makes her further unacceptable is the frivolous demeanour that she is forced to portray.

On the technical front, the film has all the trappings of an A-lister.

He captures the locales in all its glory.

Amit Trivedi's music is effective and it does elevate the viewing experience. The songs; "Aaj Se Teri" has interesting lyrics and "Ladki Sayani ho gayi" that celebrates womanhood is well-choreographed. The other two songs don't register at all.

Overall, though entertaining, Padman is like a long-drawn public-service film that's worth your ticket money.

There was Sanjay Leela Bhansali's stunning "Padmaavat" two weeks ago. There is the stunning-in-its-own-right "Pad Man" this week.

There is the period film. And then there is the film about the periods. Excellence comes in many packages. But rarely in a small secret package wrapped a newspaper. Sometimes, these packages cost Rs 55 and are completely out of reach for the non-urban women of India.

One man in Tamil Nadu, who is miraculously a convincingly-transformed North Indian in "Pad Man", decided to do something about making sanitary pads affordable to poor women.

The thought was not just unmentionable but also outrageous. It still is. The pain, humiliation, strife and final victory of Laxmikant Chauhan is narrated in a series of quickly-cut quirky bitterly humorous episodes (editor Chandan Arora can take a bow) that could easily have become caricatured preachy and propagandist.

"Pad Man" is none of the above. It celebrates the spirit of enterprise with enrapturing integrity and tempered gusto, rendering the saga of Laxmikant Chauhan's journey from familial humiliation and spouse-desertion to a Padma Shri addressing the United Nations.

But before we get there, a word on the cinema of noble intentions that seems to have run out of steam in these times of perverse dreams. Nobility in these cynical twisted times when little girls get raped and big boys sell state secrets for big bucks, is not a quality we value in art.

Given the premium we place on self interest, the sheer generosity of spirit that R. Balki displays in his fifth feature film -- and by far his finest work -- should be reason to stand up and applaud "Pad Man".

But wait. Hold on to your seats. There is much more to celebrate in this wonderfully motivated film, a tidalwave of menstrual liberation that sweeps us into its charming folds like an old grandmother in whose arms we would cuddle and forget the worries of the world.

"Pad Man" possesses a rare innocence and charm. The proclivity to live a life of utter selflessness that seeps out of every pore in its protagonist's heart, comes pouring out of every frame, wrapping us in a feeling of bonhomie that captures life's most cherishable emotions.

It is very hard, almost impossible, to forget the protagonist, a true hero of our times, Laxmikant Chauhan. And not only because of the luminous way the character is written by Balki and his co-writer Swanand Kirkire.

It's the way Akshay Kumar plays Laxmikant, a man driven to insane bouts of audacity by the passion to diminish the pain that women experience for 5 days (disparagingly referred to as 'test match' by the boys of the 'mohallah') every month.

Balki adopts a simple, straightforward linear narrative mode, leaving behind the swag and swagger of "Cheeni Kum", "Ki & Ka" and the underrated "Shamitabh" to focus on the man and his mission with a singlemindeness of vision shared in equal measures by the protagonist and the filmmaker.

There are passages of keen satire rubbing shoulders with fleeting images of deep contemplation in the supple sturdy and rugged storytelling, all merging in a marriage of Pure Cinema and Social Statement.

The narrative does tend to overstate its case. And there are sequences such as the one between Sonam and her screen father in a car at the end, which smack of over-explanation.

But most of the time, Balki knows where to hold back and where to let go. The pauses in Laxmikant's saga are rarely filled with irrelevance. Balki and his leading man won't allow a life so rarefied to be inured in nonsense.

The performances are uniformly appealing. I love Balki's unusual casting tricks in all his films. Here in "Pad Man", watch out exciting underexposed acting talent, for instance veteran actress Jyoti Subhash as Akshay Kumar's mother. And Sunil Sinha(remember him in Gulzar's "Maachis"?) as Sonam Kapoor's Sardarji father. Sinha has some of the best father-daughter scenes with Sonam and the film's finest line: "To be a complete father, try playing the mother. To be a complete man, try feeling a woman's pain."

While Radhika Apte as Akshay's wife is uncharacteristically over-the-top in conveying a woman's menstrual anxieties (at times she behaves as though the wife Gayatri has her time of the month for the entire month) Sonam's Pari is a delight. The actress plays a table player and an incorrigible do-gooder and Laxmikant's biggest support, all without toppling over into excessive sweetness.

The kiss she shares with her co-star is a little... ummmm... out of place. But that's okay. No one and nothing is perfect.

The film belongs to Akshay Kumar. Make no mistake about that. Playing Laxmikant with a mixture of inbuilt ingenuity and curiosity he makes the man Abelievable and endearing, so compassionate and inspiring.

As Laxmikant Chauhan/Arunachalam Muruganantham, Akshay Kumar's rousing speech at the UN is the showreel that will be shown when he gets his first lifetime achievement award. In the meanwhile, do reserve every single acting honour of 2018 for this performance.

Arunachalam Muruganantham is not North Indian. But after watching Akshay Kumar play him, I wish he was. 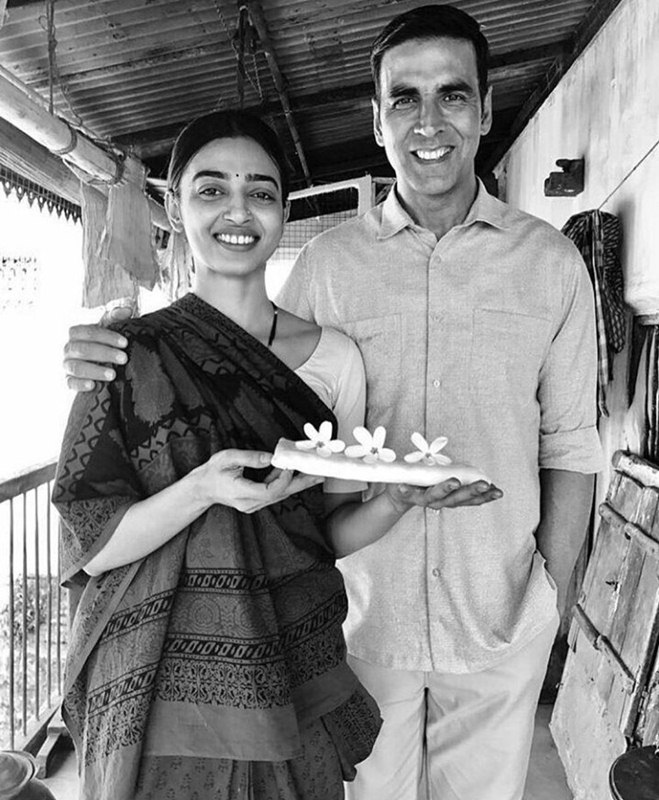 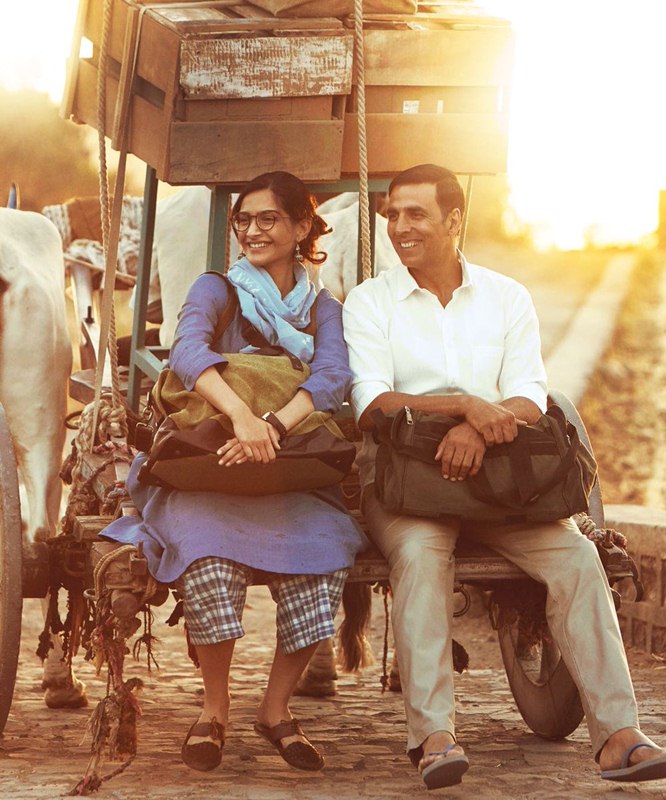 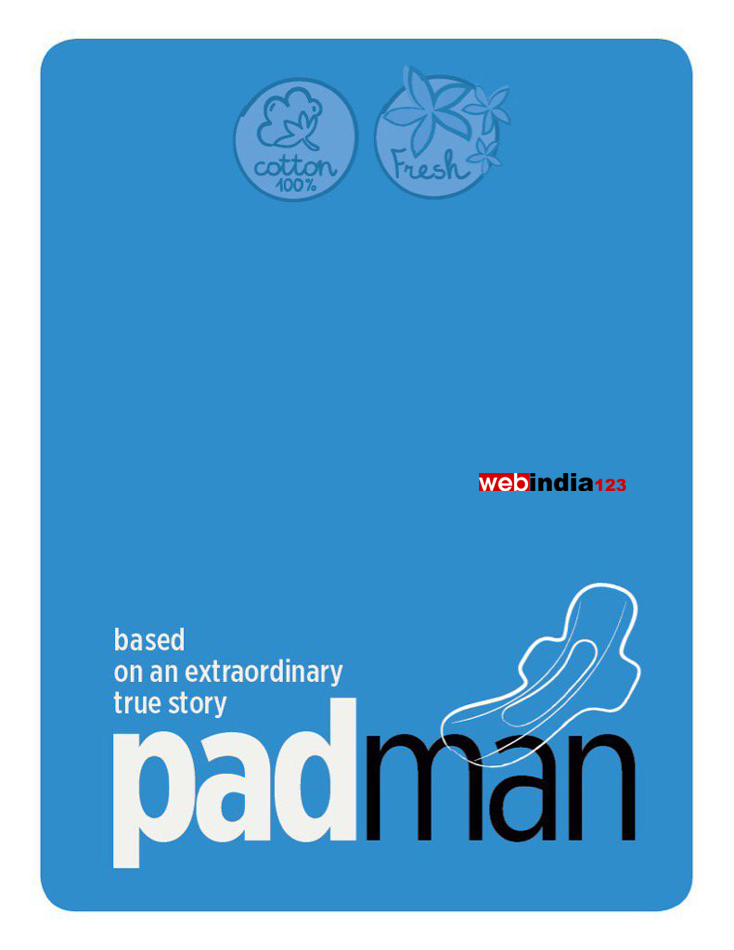 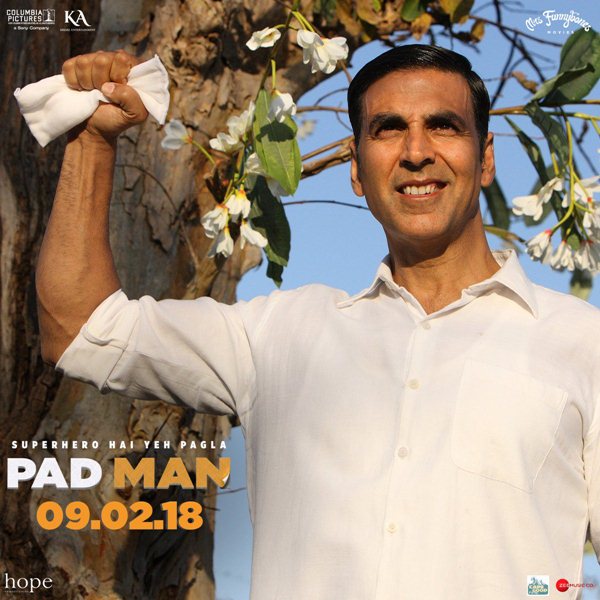 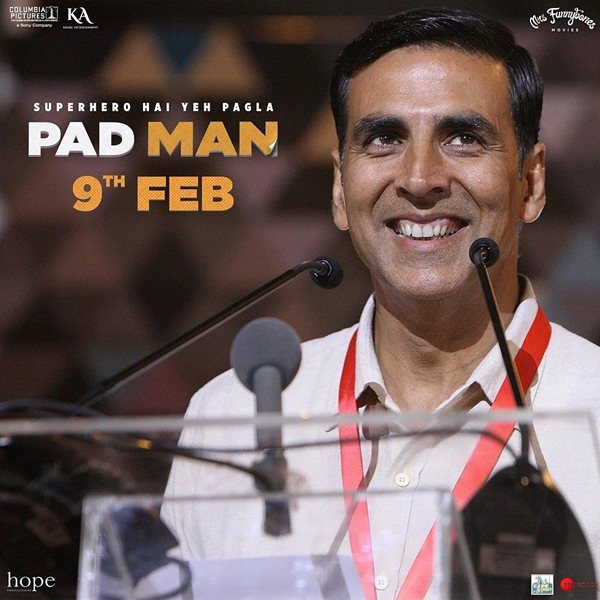 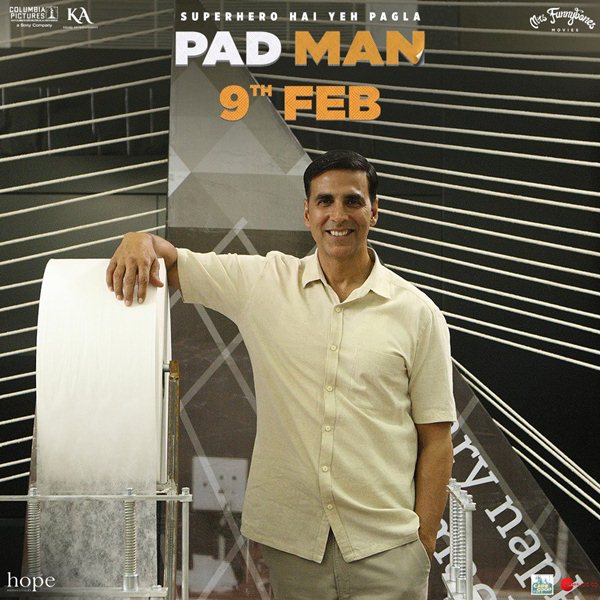 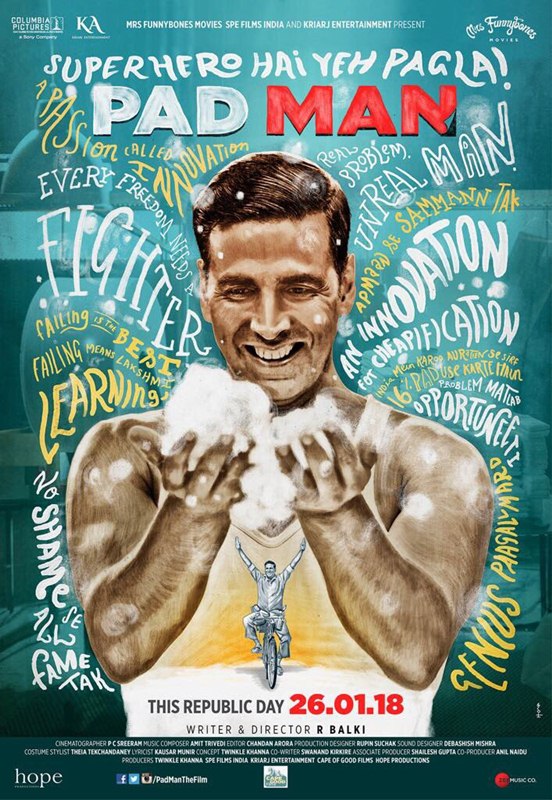 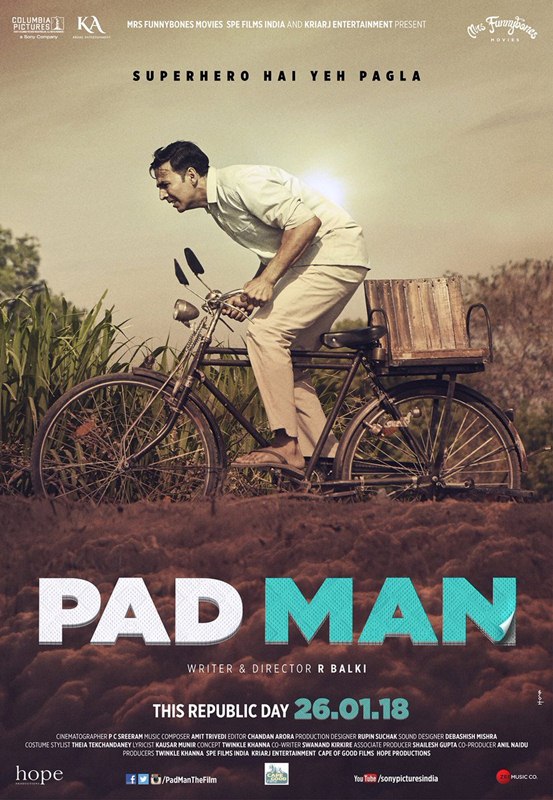 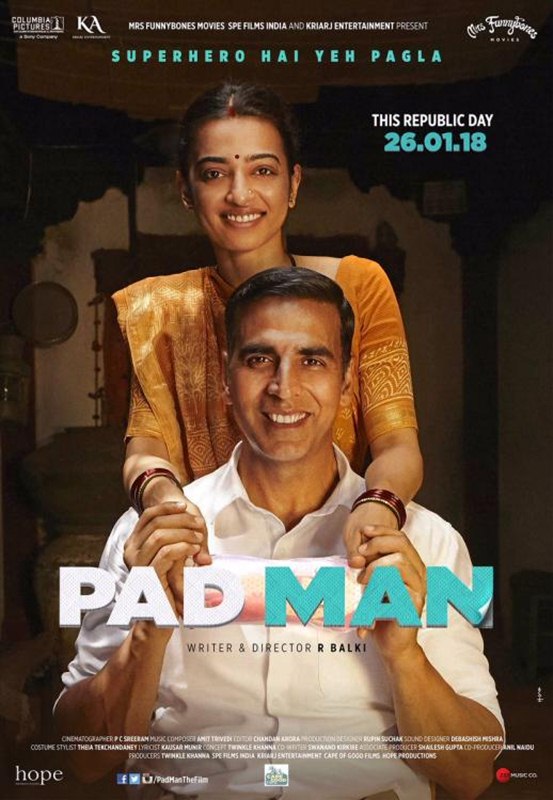 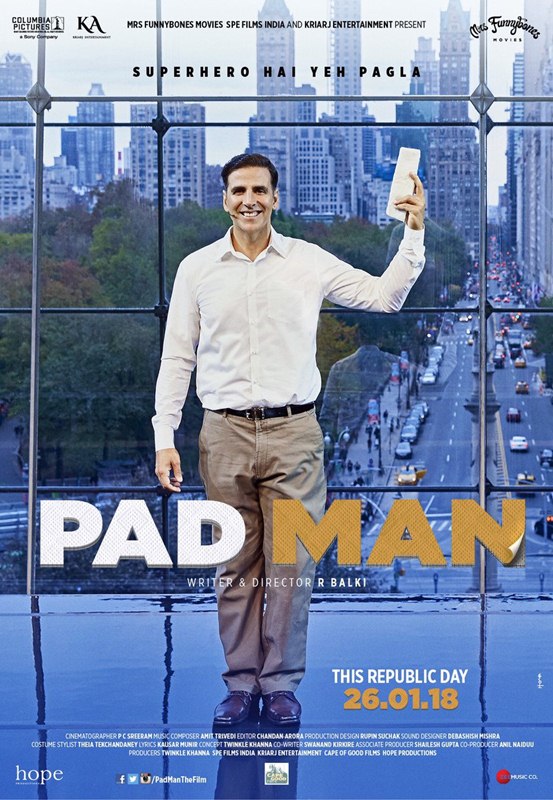 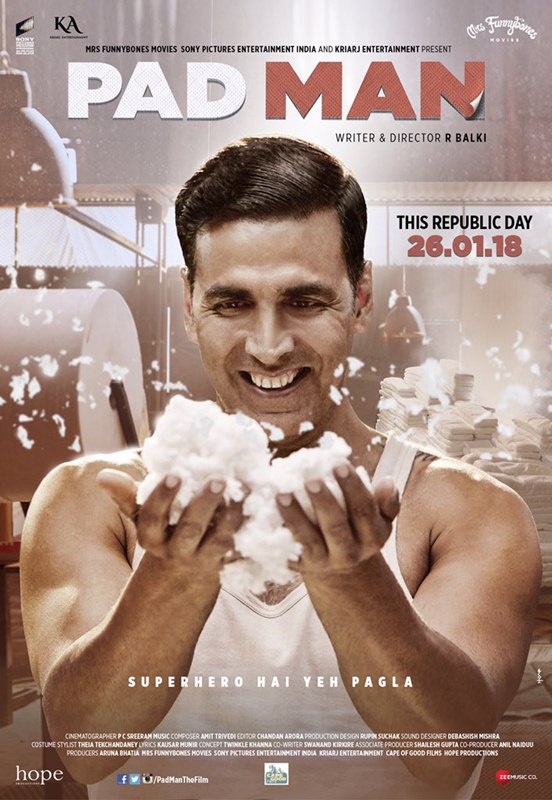 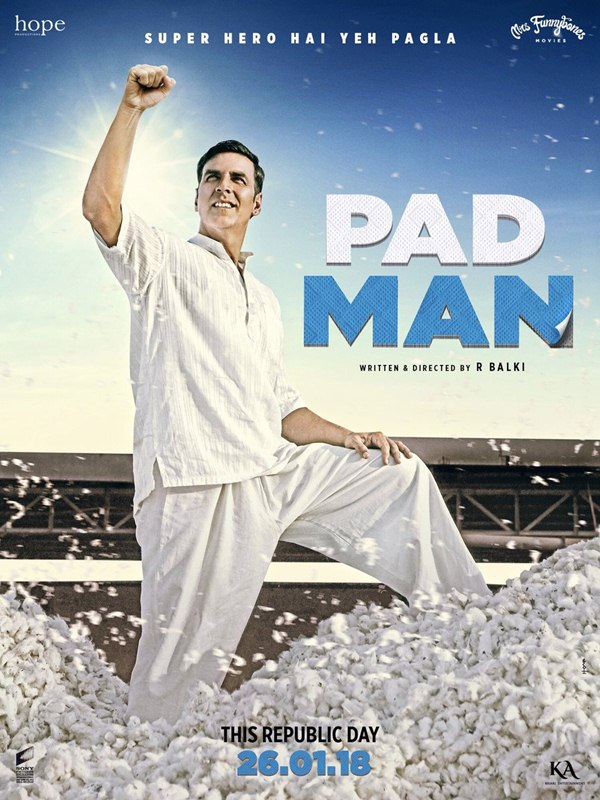 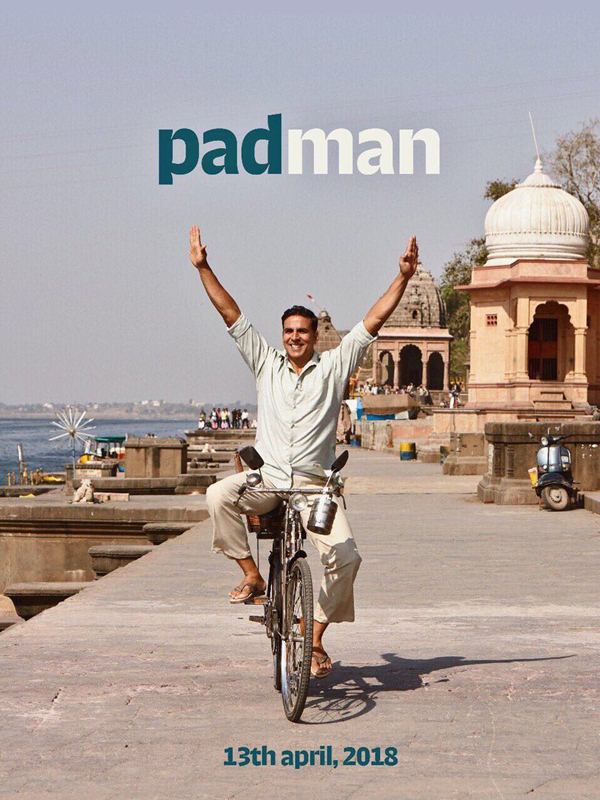