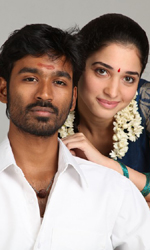 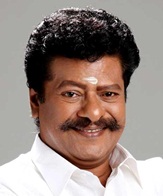 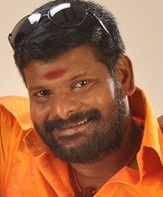 Welcome to the world of sickles, white-clad politicians, dignified dadas, sincere and brave young man, attractive girls, load of action and lot of sentiments created by director Hari in his latest flick Venghai. Starring Dhanush and Tamannah, the film also has a fast-paced script with many twists.

However, the story has nothing new to offer. Hari has repeated his earlier films with some changes on the surface level. You can compare it with Thamirabarani or Singam. The basic story is same, but the director has managed to recreate his magic of providing a mass entertainer without boring the audiences.

You have a near-perfect family with a son who is obedience-personified and he fights his enemies.

Set in a village, the film revolves around Veera Pandi (Raj Kiran), landlord who is also the most respected person in Pandiapuram, a hamlet near Sivaganga. You guessed it right, he is a do-gooder who commands respect from all and is feared the most by his enemies.

Selvam (Dhanush) is his loyal son, who always does the right things at the right time amd sees his father as his role model.

Rajalingam (Prakash Raj), the local MLA, who has risen to his position mostly because of the influence enjoyed by Veera Pandi in the region. Rajalingam doesn`t share the good motives of Raja Pandi. He has come into politics to enjoy power and earn lot of money.

Raja Pandi tries to correct him, but the MLA has no intention to listen to him. At the same time, he cannot afford to ignore Raja Pandi.

Meanwhile, Raja Pandi, who has many enemies because of his strictness, wants to protect his son from them. So he sends him to his uncle who lives in Trichi.

Selvam meets his childhood friend Radhika (Tamannaah) in Trichi. Selvam tries to revive the friendship, but the girl avoids him. Selvam pursues her and expresses his love. Radhika responds positively after a lot of hesitation.

Rajalingam tries to eliminate Selvam, to tame his father. Though Selvam tries to avoid any confrontation to satisfy his father he is forced to take the sickle soon. He defeats Rajalingam`s plans. This incident makes Rajalingam more furious. He manages to become a minister and uses his power to insult Raja Pandi.

Selvam defuses his efforts and Rajalingam is ready for final show down. Selvam is ready to face anything to save his father. Watch the movie to know who wins and how.

Venghai is typical Hari style formula movie with usual action, comedy, family sentiments, cat and mouse game and some glamour. Despite the predictable story, Hari has managed to make the script interesting to some extent. The first half is slightly sluggish, while the second half moves ahead fast.

Hari has shown the checkmate game between villain and hero in many films, but he is able to make it watchable. The twist in Tamannah`s character is interesting.

The major flaw is that the story and screenplay have nothing new. Everything happens in a predictable manner.

National award winning actor Dhanush`s role is not a challenging one but the actor has done well to make it look credible. Rajkiran and Prakash Raj get familiar roles and render neat performances.

Tamannaah role has some shades and she has handled it well.

Music by Devi Sri Prasad is just about ok.

Performances by lead actors, racy script, and action scenes are the plus points while the cliched story without any surprise element and sluggish first half could be cited as negative points.

Overall, Venghai turns out to be a commercial cocktail, served with sickles and sentiments.