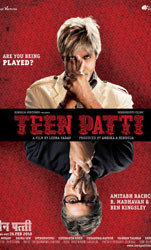 If you can get over the ludicrousness of a distinguished mathematician, whose god is Albert Einstein and who at the end of the film gets the `Isaac Newton Award` for excellence in his field, masquerading as a seedy gambler, then Teen Patti is a surprisingly skilful and audaciously complex piece of drama.

It is a tautly-scripted and brilliantly executed film on the deep-rooted link between financial ambitions and moral compromises.

Writer-director Leena Yadav gives the theme of monetary indulgence a dizzying but pinned-down spin. She speeds confidently across out-of-control lives on a college campus with the confident vision of raconteur who spins a seemingly indecipherable web of deceit, intrigue and crime.

Miraculously, Yadav`s yarn preserves its pencil-sharp edge of intrigue and wit right to the end. The story of the eccentric math-magician`s adventures takes the narrative from underground addas to high-class casinos where Professor Venkat Subramaniam, his junior colleague Madhavan and four students convert the professor`s newly-discovered mathematical theory into hard cash on gambling tables.

The plot reveals layer after layer of conspiracy until we come to the core idea.

The story unravels through an extended dialogue in Cambridge between Subramaniam and a British maths professor Perci Trachtenberg played by Bachchan and Sir Ben. Just watching the two distinguished baritones exchange notes on academia, life and their overlapping quirks is a pleasure that makes for full paisa-vasool viewing.

Alas, one of the baritones belonging to Ben Kingsley speaks in Boman Irani`s voice. And that too in Hindi! Why are the two professors huddled together in Cambridge speaking to each other in a language that suggests no tenability except a practical desire to make itself intelligible to Hind-speaking Indian?

Teen Patti targets its cerebral entertainment quotient at an audience that is willing to expand, and not suspend its disbelief. The proceedings charted by the intricate plot take the characters belonging to three generations through a smoky, compromised kingdom of the devil and the damned.

There`s a touch of Faustian wickedness in the way the old professor, his subordinate colleague and their four brightest students embrace hedonism. The parameters of what `is` and what `should be` are almost blurred beyond redemption. The film gets its moral colour and texture from the technicians who seem to know the exact shades needed.

The death of one of the students (debutant Siddharth Kher) signals the redemptive overture in the plot. Siddharth`s `Bonnie & Clyde` act with his girlfriend (Shradha Kapoor) is indicative of the places that youngsters want to visit in their fantasies. The nightmare is just a hop away from the dream.

From the mathematical and magical to the murky and immoral, Leena Yadav exercises supreme control over the goings-on. At any given moment the narrative is susceptible to collapse like a house of cards. But Yadav shows a grip over her characters` dithering conscience.

Aseem Bajaj`s camera work is exquisite in delicate shades. The camera knows where it has to go and slips in quietly to capture a world that has lost its plot.

The songs and dances are edited with an eye for elegant economy. This director means business.

Many sequences such as the one where Madhavan says goodbye to his screen girlfriend Raima Sen are shot to suggest the edginess of a world that could topple over anytime.

Presiding over this world of infinite infamy is Bachchan. He portrays the ill-understood proclivities of the academic genius with a profound absence of brouhaha. Even as the world outside falls apart, Bachchan creates an unspoilt inner world for his character.

As for Sir Ben, the British actor`s clipped tone is gone. What remains is half a performance... Good enough.

Madhavan pitches in a bravura act with lots of furtive, nervous close-ups indicating a moral breach that could destroy the character any moment. The four newcomers are pleasant enough in the spaces provided for them. But given how well each of their character is written, none of them goes beyond the script`s requirements.

A pity. Because the film quite often transcends the written word to go into the realm of the abstract where the existential joys of mathematics meet more earthly pleasures. Surprisingly ingenious, Teen Patti is not so much about the cards that are dealt on the table as the ones that destiny doles out.

Set in India and England, and starring two of the greatest living acting legends of our times - czar of the Indian film industry, Amitabh Bachchan and Academy Awards Winner Ben Kingsley - Teen Patti is an emotionally riveting and razor sharp thriller about greed, deception and giant feats of imagination. Relayed against the backdrop of modern India - made internationally beloved following the success of Slumdog Millionaire, Teen Patti is one of the most fascinating new films to emerge from Asia, its themes and narrative are so profoundly particular to India that it is ultimately transcendent and therefore universal in its appeal.

Ben Kingsley, who essays Perci Trachtenberg, widely regarded as the word`s greatest living mathematician, meets Venkat, played by Amitabh Bachchan, a reclusive math genius from India, at a high rolling casino in London. Venkat tells Perci about an equation that could not only change the dialogue on mathematics forever, but one that has already left an indelible impression of guilt - for many painful reasons - on Venkat`s life.

As it turns out, the reclusive genius Venkat has cracked a theory that could redefine the principles pf probability and randomness. However, as with all exceptional knowledge, his equation has its upside - as well as its dark underbelly. Aware that he is on the precipice of an extraordinary discovery, one that could find applications across various sciences, Venkat is encouraged to test his theory in the real world by professor Shantanu essayed by Madhavan (the super star from South India), an ambitious colleague of Venkat. Although Venkat has no interest in the money that could come from practicing his equation to crack Teen Patti, (a poker game) which could rake in all the moolah, he eventually succumbs to Shantanu`s charismatic persuasion. Soon, with the help of a few students, each with a complicated and singular fate of their own, they explore the addas (underground gambling dens) of wild Bombay, and a series of edge-of-your-seat escapades keep the film moving faster than a bullet.

But what starts out as an experiment between a charismatic young professor and an eccentric older one soon descends into a game neither of them can control. When their lives sink into maddening chaos, the greed and desperation that had fueled them on can no longer save them.

Perci understands that Venkat`s theory in essence, questions the idea of what is random - and what fated. A surprising and deeply moving redemption, initiated by Perci, closes this stupendously modern film that is as much about the private equations of honor and change, and about knowledge that can change the world. But what if the price of this knowledge is life itself? 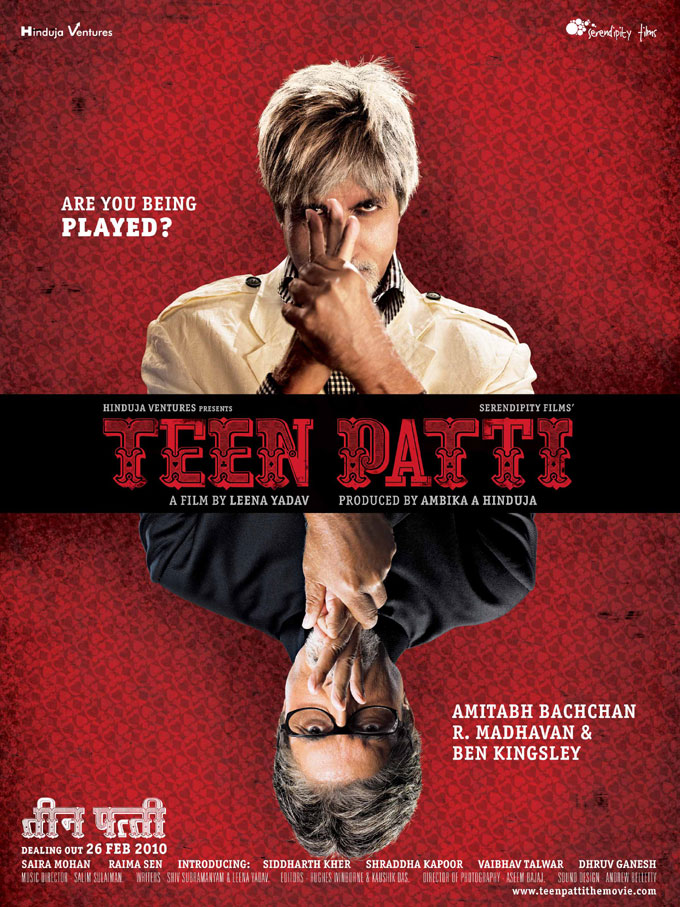 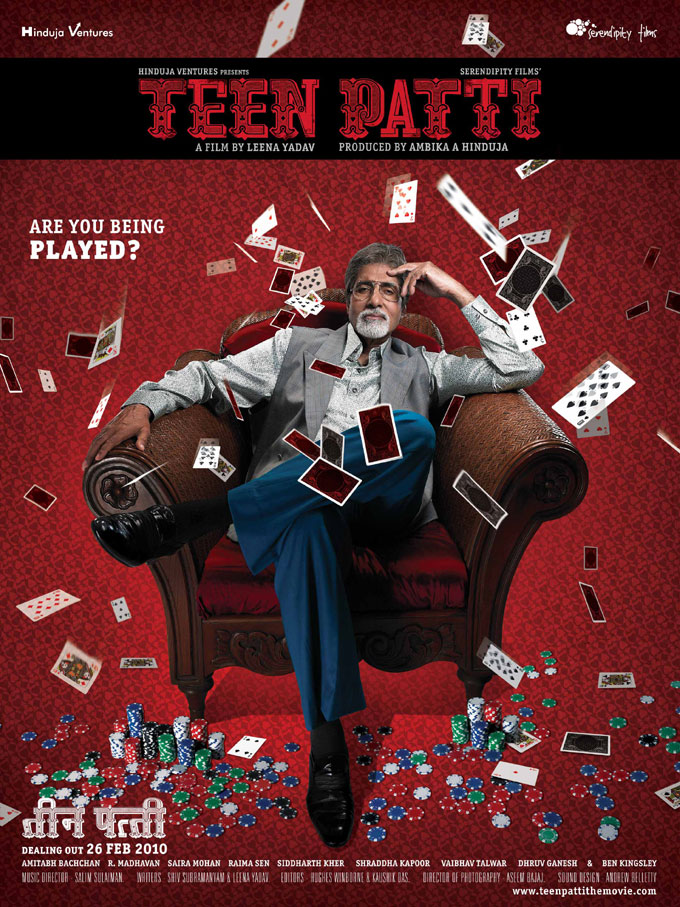 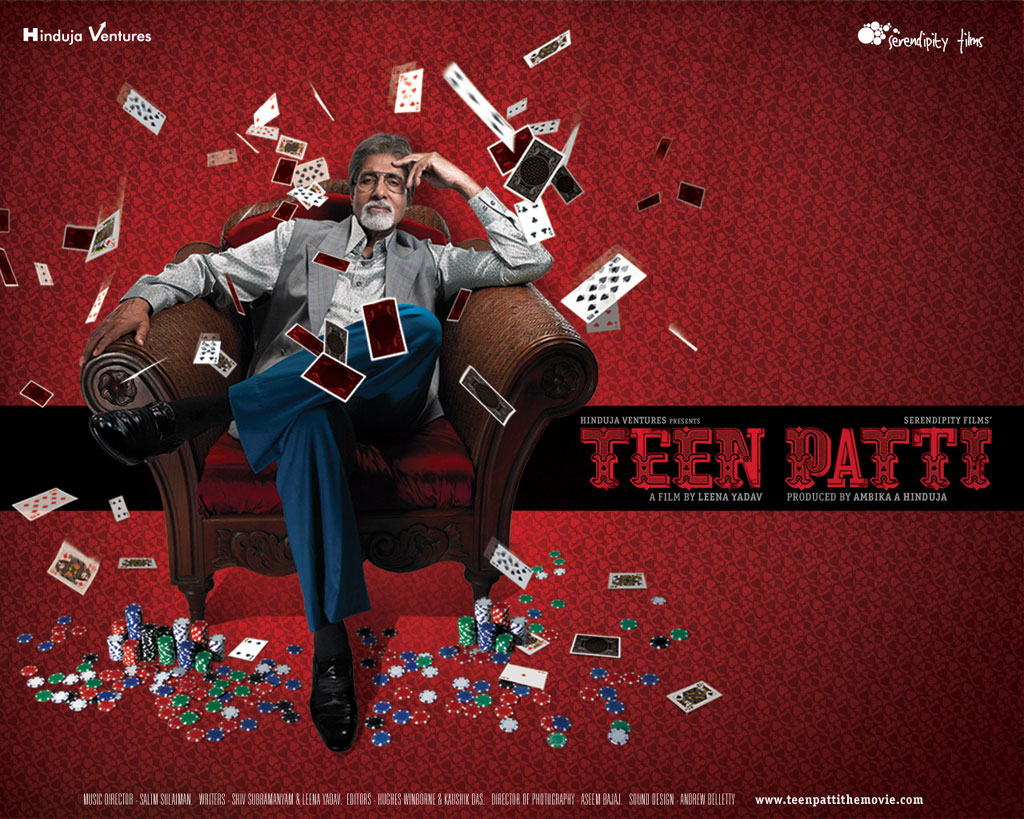 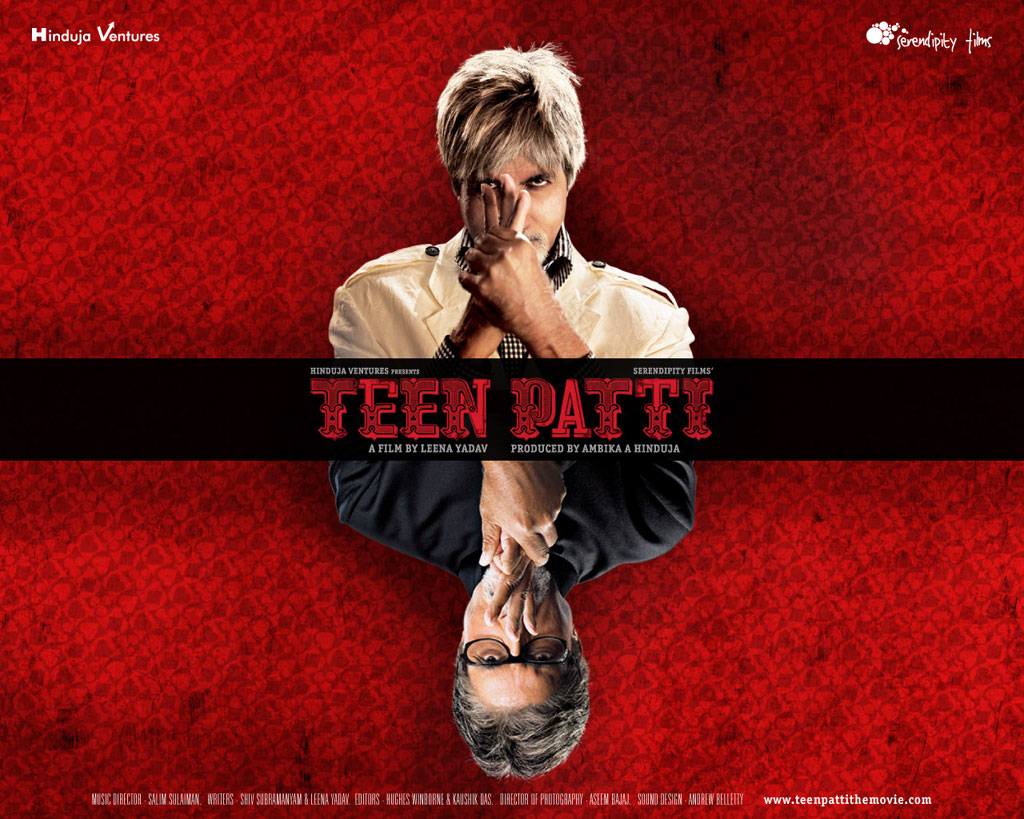