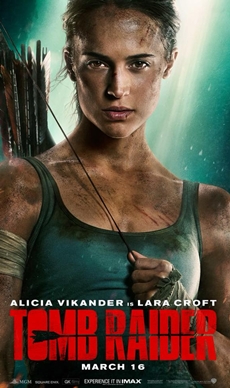 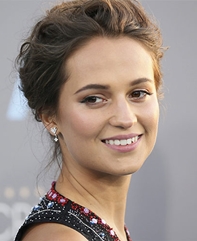 
Director Roar Uthaug's action-adventure film "Tomb Raider" is the third film of the "Tomb Raider" series which first made an appearance in 2001. This is also a reboot of the 2013 released video game of the same name.

In this edition, Alicia Vikander, flashing her washboard abs takes over the mantle of Lara Croft from Angelina Jolie. And unlike Angelina's Lara, this one is more vulnerable, kind and compassionate, minus guns and superhuman abilities. She establishes herself as a proficient cyclist, kick-boxer, archer and at the apt moment even displays cold-blooded killer instincts.

Seven years after the disappearance of her father Lord Richard Croft (Dominic West), Lara leads a reckless and carefree life, working as a courier girl. She is cash-strapped, yet she refuses to accept her vast inheritance as this would mean accepting the fact that her missing father is dead.

But inadvertently, she stumbles upon a pre-recorded message from her father detailing his research about Himiko, the mythical and cursed Queen whose touch brought death.

Richard had apparently left for Japan in search of her tomb. In his message to Lara, he warns her to destroy all of his research. But Lara decides to investigate further and so she follows his final footsteps and heads east. She travels to Hong Kong and then sails to the purported island in Japan, where the tomb is situated.

The plot, packed with her travails is steadfastly predictable, which include some borrowed iconic sequences from the video games. The action sequences are generic and the adventure seems a little uninspiring and lacklustre.

The inciting moments are flat and the motivation of the characters are shallow and hackneyed. The dialogues are uninspiring.

Alicia Vikander, with her sharp features as Lara Croft, is pretty relatable. She is aptly supported by Dominic West as her father Richard who at times does not seem to have aged in comparison with her, Kristin Scott Thomas as Croft Holding's corporate caretaker Ana Miller, and Walton Goggins as the murderous Vogel who too is searching for Himiko's Tomb.

With ace production values, the film is glossed over. The computer generated images are skilfully meshed with the live-action sequences and the 3D effects are as good as not being there.

Lara Croft, the fiercely independent daughter of a missing adventurer, must push herself beyond her limits when she finds herself on the island where her father disappeared. From Warner Bros. Pictures and Metro-Goldwyn-Mayer Pictures, Tomb Raider is the story that will set a young and resolute Lara Croft on a path toward becoming a global hero. The film stars Oscar winner Alicia Vikander (Ex Machina, The Danish Girl) in the lead role, under the direction of Roar Uthaug (The Wave), with Oscar-winner Graham King (The Departed) producing under his GK Films banner. The film's production begins on the heels of the 20th anniversary of the wildly popular video game franchise from Square Enix, Crystal Dynamics and Eidos Montreal.