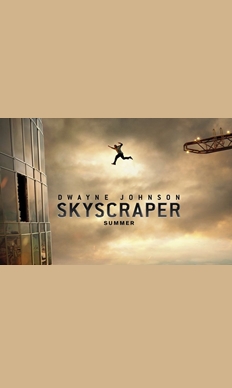 Despite being visually exciting, suspenseful and entertaining, "Skyscraper" is a lowbrow, one-dimensional, fun B-grade action thriller that is absolutely worth a watch.

The premise is simple and the plot is predictably straight laced. Will Sawyer (Dwayne Johnson), an ex-military operative who has lost his leg in an explosion, now owns a security company that has been appointed to service 'The Pearl', the tallest building in the world, built by the Asian Financier Zhao Long Ji (Chin Han).

Fit with the latest security measures, the building seems insurmountable, till a group of mercenaries led by Kores Botha (Roland Moller) try to sabotage the building by burning it down because of their differences with Zhao Long Ji.

Sawyer's stakes in saving the building are doubled as his wife Sarah and two children; Georgia and Henry, are stranded in the blazing skyscraper. How he rescues his family and Zhao and saves the building from being completely destroyed, forms the crux of the film.

The film is serious at times with by-the-numbers, over-the-top set action pieces and a few little twists here and there that defy expectations. The audience may find the set pieces to be incredibly entertaining, but in actuality, they don't particularly mesh with the narrative. But then, as an action film it delivers the goods.

Overall, the film is Dwayne's canvas. He entices the audience with his jaw-dropping stunts especially when he is dangling outside the building with nothing but a rope and wrapped prosthetic leg keeping him alive, the notion of "suspension of disbelief" only goes so far to save it.

He and Neve Campbell, who plays his wife Sarah, have surprisingly solid chemistry and together they as a couple make the telling of the film relatable. The kids are there to tug you on the emotional note, which definitely seems forced.

Overall, the film delivers on pretty much everything it promises and even adds a layer of emotion when looking at the family dynamics.

In fact, it even tries to reach the levels that the original "Die Hard" did, but then the ridiculous dialogue at the end - "You nearly need a shower" belittles Sawyer's endeavour and takes away from the seriousness of the events one witnessed.

Global icon Dwayne Johnson leads the cast of Legendary’s Skyscraper as former FBI Hostage Rescue Team leader and U.S. war veteran Will Sawyer, who now assesses security for skyscrapers. On assignment in China he finds the tallest, safest building in the world suddenly ablaze, and he’s been framed for it. A wanted man on the run, Will must find those responsible, clear his name and somehow rescue his family who is trapped inside the building...above the fire line.