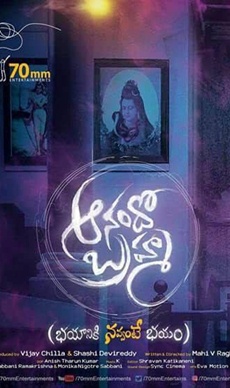 Mahi Raghav made a noticeable debut with the slice-of-life campus drama "Paathshala" a few years ago, and it was not a film you could easily write off. It marked the arrival of a sensible filmmaker, who was desperate to break the monotony and give audiences something different to celebrate. His latest film, "Anando Brahma", is another attempt at something new in the done-to-death horror-comedy genre, and the result is highly satisfying, to say the least.

"Anando Brahma" is set in a haunted house where a bunch of characters die tragic deaths. Most horror-comedies, despite being cliched, are well received when the thrills are strongly complemented by comedy. Raghav's film, too, uses all the tricks associated with the genre but it doesn't take the same route as its contemporaries and that's why it shines. By steering away from the regular horror template, it churns out a delightfully refreshing horror-comedy where the joke is on the ghosts and the flaws of its lead characters.

In an entertaining twist, the ghosts in "Anando Brahma" are afraid of humans whose biggest flaws become their strength. It might sound slightly far-fetched, but the way Raghav has justified and treated his attempt, will leave you with a good laugh. It's been a long time since someone saw the horror-comedy genre from a fresh perspective, and Raghav shows there is still so much of untapped juice left in this genre.

Taapsee plays one of the prime characters but the plot doesn't revolve around her.

"Anando Brahma" primarily rests on four characters, who are in dire need of money and in the process take up a challenging task. This is the part where Raghav's writing deserves much praise. He uses the flaws of the four characters to write the film's best and thoroughly entertaining comic stretches, and the portion involving them brings the roof down.

Shakalaka Shankar and Vennela Kishore are terrific in their respective roles.

Shankar, in particular, is outright hilarious when he imitates celebrities like Chiranjeevi, Pawan Kalyan and even Baba Ramdev.

"Anando Brahma" has its flaws, especially when we are not explained some actions of Rajeev Kanakala, but you can easily oversee it, thanks to the rib-tickling fun second half. Even at just over two hours, the film does feel long because of the very slow proceedings in the first half. However, once the story shifts to the haunted house, it takes you on an entertaining ride.

Actress Taapsee Pannu worked on her latest Telugu outing "Anando Brahma" free of cost and instead struck a profit-sharing deal with its makers -- something very unlikely in the southern film industry.Read More

'Anando Brahma' to be remade in multiple languages

Director Mahi Raghav says remake talks have been initiated for the remake of his latest Telugu release "Anando Brahma", a horror comedy which stars Taapsee Pannu in the lead, in multiple languages.Read More