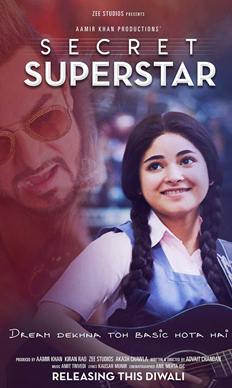 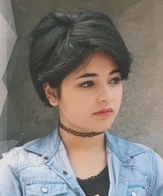 What one likes about Aamir Khan is that, with every act of his, he transcends as an actor. He surprises you by eerily getting into the skin of the character. With his various unconventional get-ups and demeanour, he makes you believe that he is the character he plays. And that too convincingly.

In "Secret Superstar", with highlighted hair, stylized beard and a flamboyant getup, he depicts an out-of-luck music director, Shakti Kumaarr who is looking for a muse to revive his failing career. His performance is surely outstanding and entertaining.

His character takes a backseat in the narrative, but he is prominent. And the film is not about him.

Borrowing heavily from the 2015 released indie American film "Rock the Kasbah", this film is smartly remodelled with cultural relevance into a melodramatic mother-daughter relationship tale.

Narrated in a simple, old-fashioned, heartfelt manner, you expect the story to be that of an ambitious young girl pining to be a superstar at a reality contest. But instead what you get is a trite and cliched, yet sublime story of a prodigy and the bond she shares with her mother.

Insiya is like any other teenager living in a middle-class locality of Vadodara, with a supportive mother Najma, loving brother (Kabir Sajid), an old relative and an abusive father. She dreams of becoming a famous singer, but the environment in her house is vitiated by the domestic abuse inflicted by her father. How she struggles to overcome her problems with the help of her school friend Chintan Parikh and the crass music director (Aamir Khan) to live a life on her terms, forms the crux of the tale.

Director Advait Chandan's writing is brilliant. The script it taut and focussed. The screenplay has the right combination of light and poignant moments. The characters are well-etched and the dialogues are lightly intense, packed with wit and sentiments which are well portrayed by the ace cast. Naturally then, this keeps you glued to the screen.

The metaphors in the dialogues too, are fresh and apt, especially when Aamir compares the effervescence of the soda to the rise of the prodigy. Or when the mother and daughter are arguing and comparing opportunities with the train on the platform and planning of the journey.

All the actors are natural and effortless. With a gamut of emotions, Zaira Wasim as Insiya is earnest and adorable. She is brilliant when she sulks with her classmate Chintan or reasons with her mother, "What is the use of getting up in the morning and not try fulfilling the dream that you saw during the night?"

Meher Vij as Najma, the loving mother and an insecure wife, is equally sincere and arresting. She portrays the silent pain with ease. Balancing her part is Raj Arjun as the oppressive father and husband. He is overtly potent and effective.

Farrokh Jaffer as the old relative living with the family, Mona Ambegaonkar as a lawyer, have their moments of onscreen glory.

Technically, the film is well-mounted and the music adds an additional flavour to the narrative. The lyrics and the pitch of the songs hit the right chords. "Main kaun hoon" and the other one with the lyrics, "Meri pyari ammi jo hain" dedicated to mothers, go well with the flow of the narrative and the snazzy last number which runs through the end credits re-emphasises Aamir's character.

Overall, "Secret Superstar" has an old film charm that is simply remarkable.

It is easy and comforting to get swayed by the rags-to-riches fable constructed with such contemporary diligence and zeal by first-time director Advait Chandan. But once you get to penetrate the bubble of bonhomie and get into thick of things, so to speak, you come face-to-face with an ennerving sterility.

"Secret Superstar" is one of those well-meaning films that keeps reminding you constantly of his well-meaning it is. Many times as I watched Chandan's panoply of tricks and treats, I felt I was being offered a Christmas deal with Santa Aamir Khan mentoring the film's 15-year old wanna-shine Zaira Wasim whose brilliance as an actor is far more dazzling than anything that is written into this film to support her dreams.

Everyone, we are told in many different ways in this stretched-out ode to wish-fulfilment, has the right to dream. Insia (Wasim) wants to be a musician, a fact that is rudely and ruthlessly repudiated by her rough and impatient Daddy played by a remarkably self-assertive actor named Raj Arjun.

Predictably and conveniently Daddy is a despot, much in the same way as Ishaan's daddy in "Taare Zameen Par"... Oh, didn't I tell you? "Secret Superstar" is a not-so-secret carryover from the other far more moving and rousing drama where a dyslexic kid was pulled out of his crushing plight by his art teacher. Aamir Khan's saviour streak has triumphed again.

A lot of people thought the climax of "Taare Zameen Par" was way too Utopian to be a convincing antidote to the dystopian condition of the little protagonist's life.

In "Secret Superstar" the theme of wish-fulfilment is played out at a much louder octave, almost like a flag being waved at us from the pulpit of righteousness that screams at us with messages of the empowerment of the girl child.

This is the world where Charles Dickens' "Oliver Twist" has been transposed into a state of magnified melodrama where the orphan will ask for more porridge even if the man providing the food is a tyrant.

"Secret Superstar" favours a pulpit propagandist tone of narration that kills most of the tenderness that the theme secretes in its initial stages. We know the girl is a hero. We know she will conquer her father's bullying tactics because she has a strong-willed mother (played by Meher Vij), a supportive friend (Tirth Sharma, giving the film's most endearing performance) and most of all, "Insia ke paas Shakti hai" ...No, not just nari-Shakti but Shakti Kumar, a loud obnoxious embarrassment of a music composer who mentors Insia to stardom.

From the time Aamir Khan swaggers into the plot as Shakti Kumar, the film begins to fall apart.

The narrative crumbles under the burden of the character's inflated flamboyance. Unable to bear the weight of its egoistic character, Aamir's performance is more a homage to Shakti Kapoor and his brand of "Aaa-ooo" self-assertion than Anu Malik or Nadeem Saifi (the two composers he seems to have copied).

Shakti Kumar is a product of a superstar's vainglorious yearning to stutter his skills.

"Secret Superstar" is suffused in spasms of nobility, piloted by its idealism and finally transported to a self-congratulatory finishing line by a central character who is everything that a brand ambassador for female empowerment should be. Cleverly the film steers away from religious references and restrictions, although the burqa plays a big hand in the protagonist's journey from oppression to creative liberation.

It was easier for Aamir Khan to take religious digs at holy cows in "PK" where the target was a pacifist majority. Now of course the rules have changed. If you want to be satirical and censorious at the cost of religious oppression, then you must be prepared for a backlash.

The gau rakshaks are watching the holy cows. "Secret Superstar" simply opts to be cute about its veiled references and succeeds in conveying an engaging though self-limiting saga of smothering the smothered protagonist's radicalised state of being.

No wonder this film was originally titled "Aaj Phir Jeene Ki Tamannah Hai". This is Waheeda Rehman's clarion call for emancipation from Vijay Anand's "Guide" given a patriarchal payoff by a loud and boorish mentor and guide who wants to be labeled a liberal feminist.

"Secret Superstar" is a heartwarming portrayal of girl power. A bit of restrain and some muted melodrama would have taken this film much further. It has long sturdy legs. But chooses not to go far enough.

Singer Meghna Mishra says she is thankful to superstar Aamir Khan for believing in her and for investing his time on her.The 16-year-old singer, who lent her voice for songs in the film "Secret Superstar", lost out on a reality TV show at an age of 11. She didn't give up and worked hard on her skill, ultimately winning praise for her work in the film, which was backed by Aamir. Read More

Movies are great to get people's attention on a topic: Katrina

Actress Katrina Kaif believes movies can be effective in putting out a message that can bring about a change in society.Katrina interacted with the media when she joined the international award-winning non-profit organisation 'Educate Girls' as their ambassador here on Monday.Asked what she thinks about having a movie based on 'educating girls' in Bollywood, she said: "I don't believe you need to have a movie to take this cause further or spread the awareness about this cause. Read More

Secret Superstar traces the journey of Insia, a 14 year old girl from Vadodara, whose dream of becoming a singer changes her life and of everyone around her. 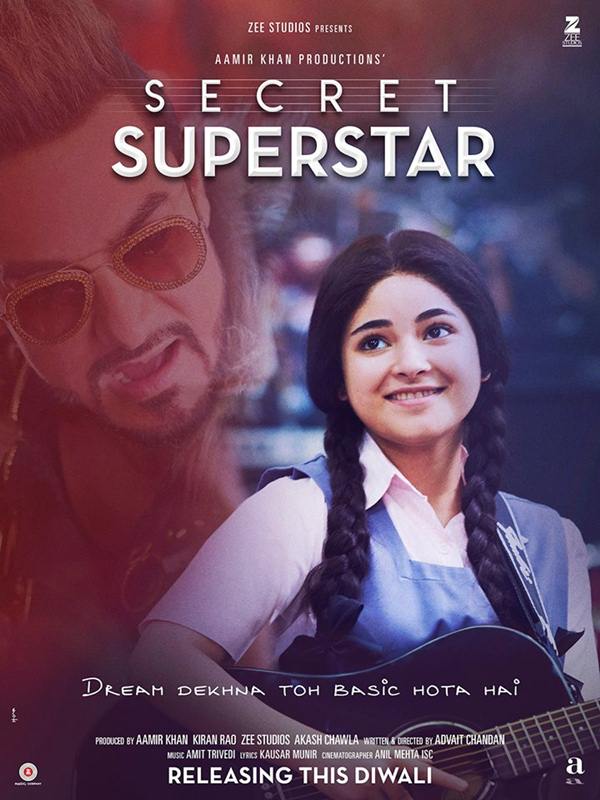 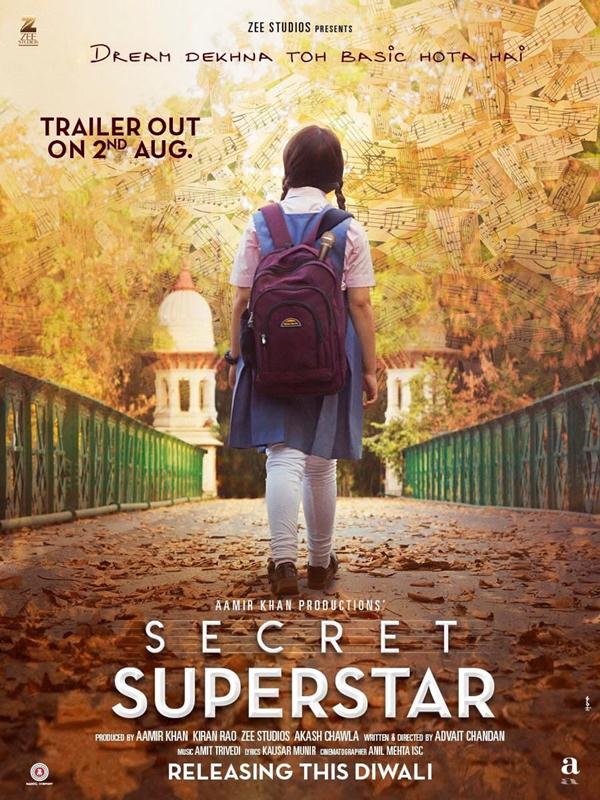 Everybody in the house