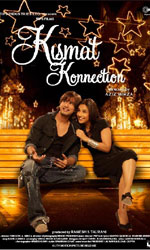 Ratings: ***
Kismat Konnection is one of the sweetest and most endearing romantic comedies in recent times. Its beauty and charm lie in its truthful and transparent depiction of life.

In one of the gloriously gossamer moments in Kismat Konnection, the hero - a harassed working-class entity and the kind of bereft soul you would immediately recognise if you`ve grown up watching Aziz Mirza`s working-class romances - looks up at the sky with one of his shoes in hand and says with a stifled sob: I give up.

Fortunately, god isn`t listening when Raj Malhotra (Shahid Kapoor) wants out. Imagine what we would do if the working-class hero stumbled and fell.

Mirza sprinkles the frames with soft, satiny, whispering waves of undulating emotions. There are many moments in this boy-meets-girl saga that spread a warm sunshine across your heart.

This time it`s more about the mystery than the chemistry. Those invisible forces that guide the romantic spirit from one heart to another, infusing two people with collective ecstasy - that`s the world which the two protagonists in the film inhabit.

This one is not about villains and goblins or over-groomed mannequins and under-dressed dolls. For Kismat Konnection, the mellow-toned manoeuvres of Mirza move into the metropolitan milieu and mores of Toronto.

Shot by the invincible Binod Pradhan, the city looks pretty. But not postcard-perfect. Mirza shoots the protagonists with affectionate gusto in the bustle. Raj and Priya (Vidya Balan) never get lost in the alien crowds heading towards god-knows-where. But it`s more a merger than a disappearance.

Portions of the film are shot with such rare care and unfussy simplicity, you simply get sucked into the sheer artlessness of the hectic but quietly comforting romantic overtures.

Pritam Chakraborty`s peppy tunes are mostly kept at the periphery, used mostly in the promotional clippings on television. On screen it`s the romantic Ba-khuda that stirs our senses and fills us with a pervasive bonhomie.

Watch Shahid sneak surreptitious glances at Vidya from the corner of the eye. Watch as she watches him sneak glances. She knows. He knows that she knows. We know.

This is a film that could do away with those witty wise-cracking crackling words of eternal romanticism made by hearts that know no impurity and malice. The narrative flows with calm assurance, bringing in its wake several interludes of heart-warming tenderness.

Shahid is extremely adept at expressing hurt. And he gets many opportunities to do so. From the moment when he pleads with God to stop tormenting him to the time he realises he has wronged the golden-hearted girl who trusted him to create a miniature haven in the concrete jungle, Shahid infuses a disarming verve to the portrait of an artist as an angst-laden man.

As for Vidya, she exudes such positivity with her voice and smile, she reminds us of the early Juhi Chawla who, by the way, makes a very unconvincing cameo appearance in the film as a goofy crystal-ball gazer.

What keeps the love-interest interesting are the details that go into preserving the core of simplicity in the man-woman relationship. The supporting cast is mildly interesting. But it`s the Shahid-Vidya axis that keeps us vigorously engrossed even when the narration loses virility in parts. But the story never sags. Never stops walking tall.

Kismat Konnection doesn`t aspire to be a classic look at the man-woman relationship. Like Mirza`s earlier films, the protagonist struggles with broken-down vehicles and a crumbling conscience, clinging to his convictions as he slides down the ladder of self esteem.

By the end, the goodness of it all just wraps you in a warm blanket. Yup, all`s well with the world. This working-class romance really works.

In college Raj Malhotra (Shahid Kapur) was numero uno - in academics, sports, dramatics and touted as the next cover of Time magazine. But four years after winning the best-student-of-the-year trophy from his architectural college, he`s wondering why a brilliant architect like him, with designs to set the Canadian landscape on fire, is still struggling to find that One Big Chance to showcase his mettle.

It`s almost as though some negative kismat is following him around because whenever something good is about to happen, it seems doomed to fail.

Why else would his alarm refuse to ring, his shower stop midway, his car refuse to start - just when he`s in a tearing hurry to reach a crucial meeting on time?

The end result is the same - the deal is dead or the client is dead!

Desperate to fight this cussed kismet that`s hell bent on playing such mean tricks on him, Raj meets a quirky oracle, Hasina Bano Jaan (Juhi Chawla). She tells him that soon his stars will change his stars and make everything work in his favour; but for all this to happen, Raj has first to find his lucky charm and never let go of it. But she tells him no more, leaving Raj mystified, trying to figure out what this charm could be.

Because suddenly his life seems to be on the right track...

He`s succeeded in persuading pretty Priya that he`s the Messiah who can save her beloved Community Center from destruction... and also opened her eyes to her philandering fiance ( Amit Verma).

Does this mean that Raj has unwittingly discovered his lucky charm? Has lady luck finally decided to smile on him? Where will his new found kismat ultimately lead Raj - to the height of love or pinnacle of success? Only Kismat Konnection can tell... 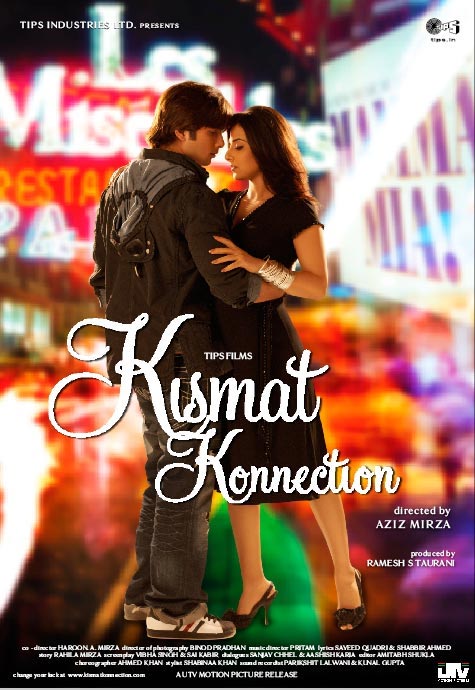 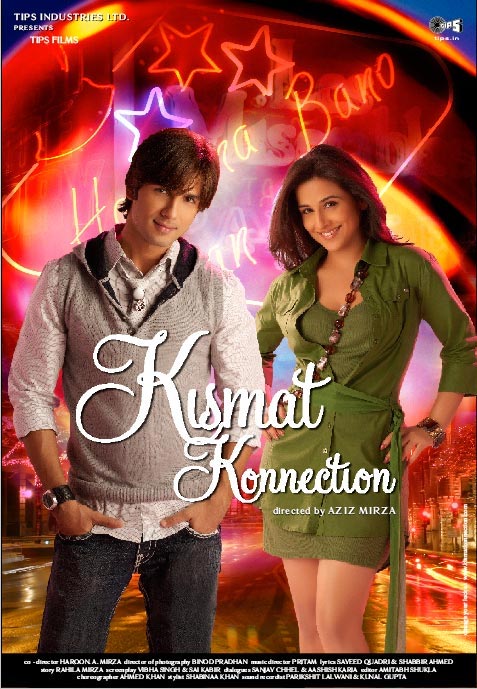 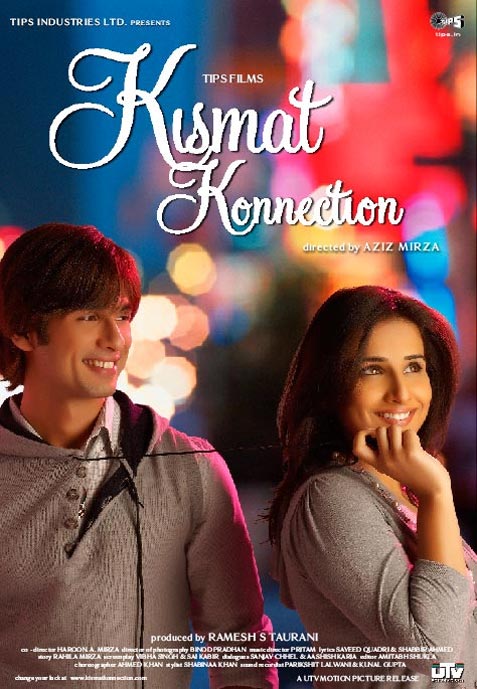 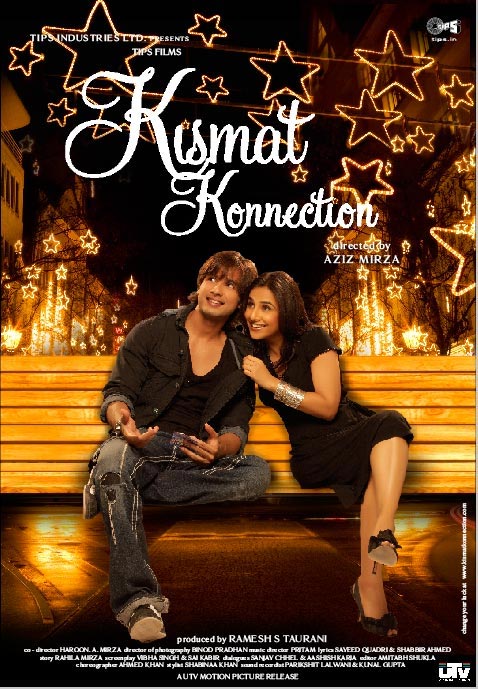 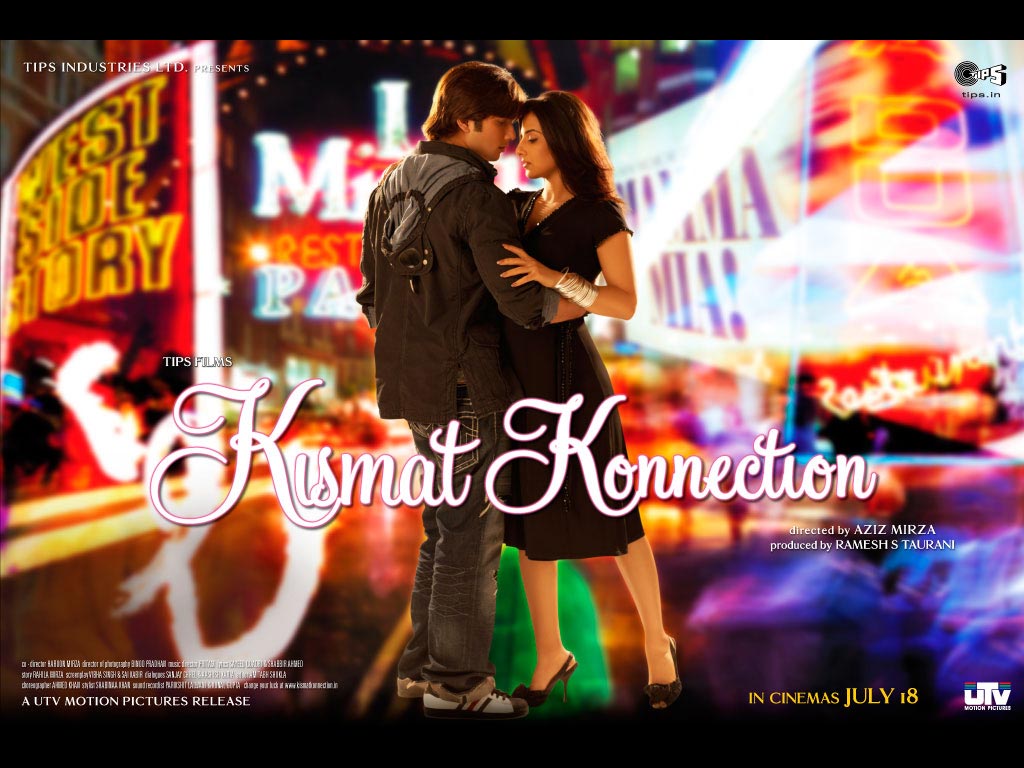