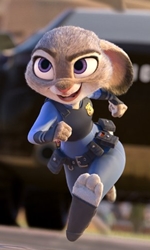 A crime adventure story at its core, "Zootopia" from the Disney stable is a thoroughly enjoyable, fun-packed animation film, packed with lessons for kids.

The lessons are so well camouflaged in the narration that they do not sound preachy. And since it comes from this animated universe, it has the potential to reach places where it might not otherwise be heard.

"Zootopia" is a metropolis of anthropomorphized, bipedal mammals where predator and prey animals live together in harmony. But of late 14 animals have been reported missing.

The narration begins with young bunny Judy Hopps (Goodwin) wanting to be a police officer. But she is discriminated because this job is normally held by large predator animals. Not taking no for an answer, she pursues her dream and 15 years later she successfully completes the police academy training and is assigned to an area in the heart of the city.

On her first day of duty, assigned in the parking area, she meets Nick Wilde (Bateman), a fox who isn't being served at the elephant ice cream counter because he's obviously shifty. She helps him out but of course, the joke is on Hopps when she discovers Wilde actually is a con artist.

Later during an investigation of a missing otter, the two end up working together as Nick was the last person to see the missing otter. What follows is a buddy-cop trail with a great detective angle.

It is only after the case is closed, that it becomes obvious what the film is all about. Yes, you have seen this story before. It's basically the plot of the classic detective drama "Chinatown" and it shares certain elements with many other films too.

But it is the screenplay and visuals that make the film appealing.

The screenplay written by Jared Bush and Phil Johnston, is surprisingly clever on a structural level. It reaches what feels like a conclusion and then changing tracks right past the previous one, makes a more nuanced point.

Technically, "Zootopia" is brilliantly conceived. The animation is spectacular with all animals faithfully created, looking appealing and truly alive. Also, each frame is visually colourful.

The action sequences are crisp, relevant and exciting to watch.

The voice cast is perfect. In addition to Goodwin and Bateman, there are Don Lake and Bonnie Hunt who lend their voices to Judy's parents, J.K. Simmons to the Mayor Lionheart, Idris Elba to Buffalo Police Chief, Tommy Chong to hippie yak, Alan Tudyk to the fast-talking weasel and Shakira to the crooner Gazelle, among others. Every actor and character is perfectly matched.

The icing on the cake comes when the end credit rolls. It is the inspirational pop song, "Try everything," sung by Sakira.

"Zootopia" is a perfect film for a family outing. It has a universal appeal.

'Beauty and the Beast' collects Rs 6.67 cr in opening weekend in India