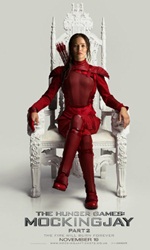 A political revenge saga, "The Hunger Games: Mockingjay, Part 2", with the premise "The end of tyranny and the beginning of a new era", is the concluding film based on Suzanne Collins's Hunger Games trilogy. It is an epic, science fiction, war film set in the futuristic dystopian society of Panem.

It would be unwise for anyone who is not yet well-versed with the series' lore to jump in at this late stage. This film is no mere sequel but the finale of an ambitious narrative in which the tragedy of each fatality relies on connections established in previous films.

As the chronicle continues, the film begins with Katniss Everdeen (Jennifer Lawrence) after nearly being killed by her lover Peeta Mellark (Josh Hutcherson), galvanises a team to eliminate President Coriolanus Snow (Donald Sutherland).

"Mockingjay, Part 2" is packed with an ensemble cast. The film is Lawrence's canvas. In this edition, she is often referred to as Mockingjay and her performance in this challenging role as the heroine Katniss Everdeen, is made to look effortlessly easy that reverberates at every turn.

Hutcherson, as the tortured Peeta, Sutherland, as the evil President, like in the previous editions, are wasted.

Eugenie Boudurant as Tigris a former Hunger Games' stylist, briefly seen hiding Katniss's unit in her shop, is amusing to look at.

And the other franchise regulars like Liam Hemsworth as Gale Hawthorne, Elizabeth Banks as Effie Trinket, Woody Harrelson as Haymitch and Jeffrey Wright as Beetee are either underused or under developed.

Unfortunately, not everything works about this instalment, the visuals complement a boring narrative with the plot progressing in a perfunctory manner at a sluggish pace. The exposition in the first half is mainly verbose, layered over tight close-ups and the second half, with magnificent wide-angle shots, is packed with a pile of blasting sounds of the war.

The several action set pieces are a modern version of classic films, prominent among the few is the revolt scene which is reminiscent of the action at the Odessa Steps in Sergei Eisenstein's 1925 released, Battleship Potemkin.

Apart from this, Katniss and her team encounter distorted zombies whose jaws resemble piranhas. This alien attack sequence is the single most outlandish, obscure, inexplicable and incomprehensible section in the film.

Also, during the final act, the vague edit jump-cuts, seem like a rushed job to wrap up the narration, making the resolution of the various story arcs, feel overtly contrived.

Overall, "Mockingjay, Part 2" will appeal only to its franchise's fans.