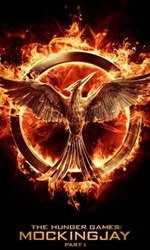 Based on Suzanne Collins's third young adult novel on the futuristic dystopian society of Panem in the 'Hunger Games' series, this film, 'Mockingjay - Part 1' is a sequel to the 2013 released 'The Hunger Games: Catching Fire'.

But unlike its previous editions, 'Mockingjay - Part 1' lacks the zing of an adventure film. During its entire run time, it just concentrates on creating a setting for the next part.

Unfortunately, this science fiction adventure film will be understood only by those who've read the book or have seen the previous editions of the series.

As the saga continues, the film begins with Katniss Everdeen, the winner of the previous 'Hunger Games', being in an unsettling transitional period of her life. Her moods swing as she battles to recover from the shock her body, mind, and spirit have undergone in the past few months.

The games are over and there is a revolution in the offing. The man who devised the sadistic competition, Plutarch Heavensbee reveals a new facet to his character. His role as the Games' evil planner was just a cover-up for his activities as a rebel agent. Now, as a rebel strategist, he is pressing Katniss to become the poster-face of the rebellion against the Capitol, governed by President Snow.

Katniss, who now lives in the underground District 13 with her sister, mother and a few trusted friends, has her own issues. She is angry that her partner during the Games, Peeta, who was thought to be dead, is now in the Capitol, giving propaganda talks. This, according to her, seems to be manipulated. She misses him and feels for him.

At the same time, she is still close to Gale Hawthorne, but her experiences have taken her far away from their romantic moments as adolescents.

The film is about the state of affairs in Panem and Katniss' personal journey in this political tale. But with the book being split into two film adaptations, this edition lacks the three act structure.

Jennifer Lawrence, who has delivered remarkable performances in her earlier films, finds it difficult to balance a fiery attitude along with frowning her brows in sadness. Her performance in this film, as the heroine Katniss, lacks energy, depth and luster; to galvanize a rebellion.

Hutcherson as Peeta, like in the previous editions, is wasted. Elizabeth Banks as Effie Trinket sticks out as an odd rebel with an amusing hairstyle and headgears. But unfortunately, her character does not take her anywhere in the narration. The rest of the cast does not offer anything exceptional.

Visually, director Francis Lawerence fails to elevate the film. The high-drill action sequences look staid and oft seen. Also, the carnage and destructions in all the districts look uniformly alike. In addition, since a major part of the film is shot in the dystopian society, the frames in monochromatic shades of grey give a monotonous feel to the film.

But what stands apart is cinematographer Jo Willems's trailing camera work which captures a few lengthy shots in the bunker rooms of District 13 and the vertical staircase there.

Overall, the film is well-made and drab. It is not in the least entertaining or satisfying. Yet it lures you to look forward to the concluding edition -- 'Mockingjay Part 2' which is scheduled to release in 2015.