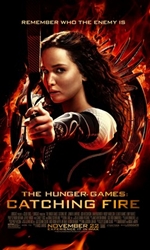 The latest installment of the franchise created from Suzanne Collins's young adult dystopian trilogy, "The Hunger Games, Catching Fire" is even more gut-wrenching, sleeker with raw emotions and engrossing than its predecessor, which released in 2012.

Yet, it lacks the elements to sustain itself as an appealing entertainer.

The film begins on a note of suspense, with Katniss Everdeen (Jennifer Lawrence) killing a man, obviously by mistake and she redeems herself with, "I did what I did, to survive." This lays the foundation of the film's premise.

But over the next few scenes, the narration gets muddled with time and space not well established. You might survive this hurdle if you have read the book; the film does not help you sort this issue.

Over a few minutes of patient and concentrated viewing to figure out the tale, you realise that "...Catching Fire' picks up soon after the events of the first film.

After their rule-bending victory in the 74th Hunger Games, Katniss and Peeta Mellark (Josh Hutcherson) of District 12 are forced to embark on a publicity tour. But instead of being euphoric and jubilant, there is a fine layer of tension brewing not only between the winners but also within the public.

The peace-keeping forces are having a tough time curbing the chaos caused by the rebels. A three-finger salute and graffiti on the city walls denotes the insurgence.

President Snow (Donald Sutherland) feels that Katniss' "act of defiance and not act of love" caused the uprising. And the best way to control the situation is to eliminate her. But how?

So he, along with the new game-deviser, Plutarch Heavensbee (Philip Seymour Hoffman) decide that in the next edition which is the 75th anniversary, instead of having a normal Hunger Games with fresh recruits, this time the surviving victors of the previous games would compete with each other.

The narration slides into the 75th Hunger Games and the games continue the same as in the 74th - but with a few added twists. Surviving in an uninhabited, yet orchestrated island is the task of the game.

The chore has psychological impact on the players. "It is not about trust, it's about staying alive." So, killing is the best option. The film gets engrossing and the tasks get more challenging with poisonous fog, rampaging baboons and warm blood rain.

The film solely belongs to Jennifer Lawrence. She takes Katniss to a new level. Her performance in the first edition was good but in "...Catching Fire", her involvement is definitely gradual and organic. Hutcherson, like in the previous edition, is wasted.

Jena Malone is great as Johanna the tough girl from District 7 with a care-a-damn razor sharp tongue. Unfortunately, Donald Sutherland as the antagonist does not leave an impact on the audience. He is flaccid as any other incongruous character on screen.

Visually, director Francis Lawrence along with cinematographer Jo Willems has made "Hunger Games: Catching Fire" more appealing with brutal frames, unique camera angles and futuristic effects. They have also delivered unique frames with colours ripped off, and this adds a new element of darkness of this dark story.

Overall, though the director has stuck to the novel giving this reality game show a larger than life projection with alluring aesthetics, his conversion of the tale from the novel to screen lacks the required spark to make it an evocative film.

This film may appeal only to fans of "The Hunger Games".