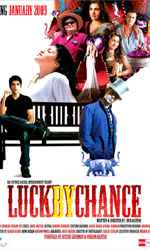 It is easy to fall in love with every performance in this intimate yet generic insider`s look at the workings of the entertainment industry.

But the one that I carried home with me was Sheeba Chadha. A marvel of subtle writing, Sheeba plays a podgy, cunning but simple-hearted producer`s sister-in-law whose husband (Aly Khan) is carrying on with a struggling starlet right under her naïve eyes.

One not-so-pleasant afternoon, Sheeba barges into her husband`s van and sees a red-nosed bleary-eyed Konkona Sen Sharma (who has just been told she doesn`t get a role she has been waiting all her career for). Sheeba senses what`s going on. But she quickly digresses her mind from her husband`s extra-marital affair.

The industry is filled with such deliberately desensitised people who function within the fickle and frighteningly flamboyant film industry with gut-wrenching self-delusion.

"Luck By Chance" -- a truly out-of-the-box outstanding work of subtle, sly, satirical and whispering art -- is filled with people whom you`re bound to have met in the fetid corridors of Bollywood or the Hindi film industry, as the star-mother Dimple Kapadia insists on calling it.

Never before has the film industry been perceived with such intuitively internalised abundance. A subtle splendour galvanised by performances that range from the credible to the incredible takes the narrative to pinnacles of expressiveness.

The performances help to ignite the characters into states of subtle yet vivid shades. The ambitious mother-daughter (Dimple-Isha Sharwani) pair, the strugglers, wannabes and losers...oh yes, every character in "Luck By Chance" possesses a luminously lived-in quality, bringing to the surface feelings, thoughts and images that are normally not brought out on screen.

Every player -- parodic, poignant and pitched perfectly -- makes savage fun of the very foibles that they probably practice with masterful manipulative hands in real life.

Zoya Akhtar gets into the star space without a moment`s aggression in her storytelling. The moments that define the relationships are built stealthily. This is a world that every person in the Mumbai film industry (for Dimple`s sake, let`s not call it Bollywood!) knows first-hand.

The debutante director occupies that space with unostentatious spirit, nurturing interludes between characters (the two strugglers Farhan Akhtar-Konkona, producer-wife Rishi Kapoor-Juhi Chawla, ideologically separated co-actors Farhan-Arjun Mathur) with the cautious care of a mother who wants to bring up her child with the right values without drawing attention to her nurturing acumen.

This is a work of tender, subtle care with moments whose immense value strikes you after the wonderfully conversational dialogues (Javed Akhtar at his expressive best) have had their say.

At heart, "Luck By Chance" is a story of one man`s plunge into the morass of compromise as he heads towards his dreams. Farhan gets what can only called another chance to do the histrionic dance. As he goes from wide-eyed wannabe to a morally devalued creature, the narrative charts his course with savage humour.

Farhan`s scenes with the nakedly adulatory star daughter(Isha playing dumb dead-on) are designed as a blend of satirical erotica and ideological annihilation. Farhan gets it right.

This is a work that oozes outstanding acting talent from every nook and corner. Whether it`s Aly as a on-the-move producer or Arjun as a struggling actor who would rather struggle in theatre than compromise, every character plays a person you`ve met if you`ve ever been a part of the Mumbai film industry.

Super stand-out performances by Rishi, Dimple, Sheeba, Hrithik Roshan(as a superstar on the skids) and of course, Konkona, whose best performance this is.

On the deficit side, (yes even a film of such high order must face the music) the narrative with its inbuilt jokes and references is too much a Bollywood insider`s job, largely inaccessible to the common man who wouldn`t know the name of Ranbir Kapoor`s secretary and couldn`t care less.

On most levels, "Luck By Chance" stands tall and luminous, portraying the world of arclights with a synthesis of style, sympathy and substance that is the opposite of the synthetic way the world of showbiz is generally portrayed in cinema.

What stays with you are moments like the one where the struggling hero approaches the once glamorous star mother at a party and wins her over... a moment that builds up into a muffled explosion of ambitious scheming achieved at a place where the sound of broken hearts is inaudible.

A starlet and a struggler meet while trying to navigate through the Hindi Film Industry and end up changing each other`s lives forever.

Luck by Chance is a slice of film industry life, in which self advancement is the sole motivator. Here, nations of superstition, fate and destiny may underline every decision but it the gigantic egos, the grand desires and the small opportunities that converge to form strange patterns. Patterns that we call kismat.

In such an unpredictable climate, is success and failure what other`s define for you or is it something you decide for yourself?