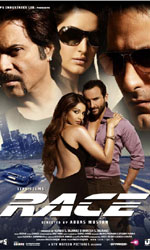 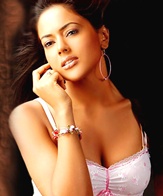 Glamour, a ritzy gorgeousness and hedonism runs across Race like a bolt of lightning cutting through a super-sleek surface reminding us that the Bold And The Beautiful are basically compromised souls.

So join them at your own risk. In Abbas-Mustan`s terribly sleek thrillers, the glamorous characters are fatally flawed. The women specially pull out all stops when it comes to realizing their ambitions and tapping into those areas of their conscience that are conventionally considered taboo for women.

In Aitraaz, we had Priyanka Chopra lusting after her employee under her husband`s nose. In Humraaz, Amisha Patel plotted with lover-boy Akshaye Khanna to marry and disinherit hubby Bobby Deol. And of course in Baazigar Shah Rukh Khan threw Shilpa down a high-rise without a second thud.

In Race too Bipasha pushes one of the heroes down a high-rise. Though telling which would be a `dead` giveaway. If you know what I mean.

The mean machine has never been meaner. None of the characters says what he/she means. And they all want to get rich. As rich as Abbas-Mustan, who have been marketing the murky side of affluence for over a decade now.

Suffice it to say money continues to be the main motivation for making the Abbas-Mustan`s characters` world go round and wrong. The four main characters sparkle sartorially like walking-talking endorsements for botox and boutiques.

Then there`s Allan Amin`s action sequences... not world-class, mind you... we`ve seen ritzy cars somersaulting in the skyline with more élan in scores of forgotten car-chase adventures from the West.

But yes, it`s been a while in Bollywood since the heroes chased cars more vigorously than skirts.

Despite the presence of three sensuous ladies, Race is a very boys-night-out kind of thriller. Skidding wheels compete with Pritam`s high-octave dance numbers to create a beguiling blend of the bowled and the bountiful.

Every one of the four main characters could be a wolf in disguise. The chic script plays an amusing cat-and-mouse game with the audiences` perceptions, shifting the needle of suspicion from one to the other character with numbing velocity until you just give up and go with the `flaw`.

Editor Hussain Burmanwallah doesn`t spare the material. Even the coolly -choreographed dance numbers are driven by a demoniacal desperation to beat the clock.

Everyone, the editor included, is shown running out of time as the two brothers Akshaye Khanna (robust and enjoying his part of the money machine) and Saif Ali Khan (scowling in transparent disdain) race to the finishing line.

Ironically the co-directors take the title a tad too literally. For a large part of the narration Saif and Akshaye are seen racing each other on cars.

The two actors seem to have enjoyed being in a film that extends the line of morality into the grey zone and makes acquisition seem like the only way to be faithful to the times that we live in.

Mid way, Anil Kapoor talking fast and furiously enters with dumb assistant Sameera Reddy to do an encore of Pankaj Kapoor and Sushmita Mukherjee from the zany detective serial Karamchand.

Ah, a touch of historicity in a tale where people live for the present only.

Karamchand chewed on carrots. His modern day avatar chews on every seasonal fruit in pursuit of a phal-proof plan to nab the culprits.

We chew on Abbas-Mustan`s inverted morality tale where the bad have all the fun. We wouldn`t know what happens to the good. They stay out of this film.

As for the leading ladies, Bipasha is naturally saucy. Katrina tries.

Actress Daisy Shah, who is busy promoting her forthcoming film "Race 3", says that she didn't want to disappoint her mentor and co-star Salman Khan in the action film.Interacting with media on Wednesday during a promotional event, Daisy, who started her career in the entertainment industry as an assistant to choreographer Ganesh Acharya for 10 years before Salman gave her break in "Jai Ho" before she is again sharing screen space with him, said: "I think life is about challenges. You have to face challenge since your birth.Read More

A gripping, multi star thriller, RACE is the story of two brothers, RAnvir Singh [Saif Ali Khan] and RAjeev Singh [Akshye Khanna], who live on the edge of life. Their business is horse racing and their beat the fast track. Winning is their birthright and danger their sport.

Set against the high flying social fabric of modern South Africa RACE is about betrayal and greed, intrigue and revenge. Even love comes laced with a motive. The stakes are too high. Double them and you have the perfect grounds for a perfect murder. What was the game? Who held the ropes? The glamorous model Sonia [Bipasha Basu], whom Ranvir loved or the beautiful secretary Sofia [Katrine Kaif], who loved Ranvir. The sudden appearance of Inspector Robert D`Costa[ Anil Kapoor] and his dumb and sexy assistant Mini [Sameera Reddy], deepens the plot into a gripping tale of drama at his best. With the brothers pitched against each other who will win? The one who plays to win or the one who plays to defeat? 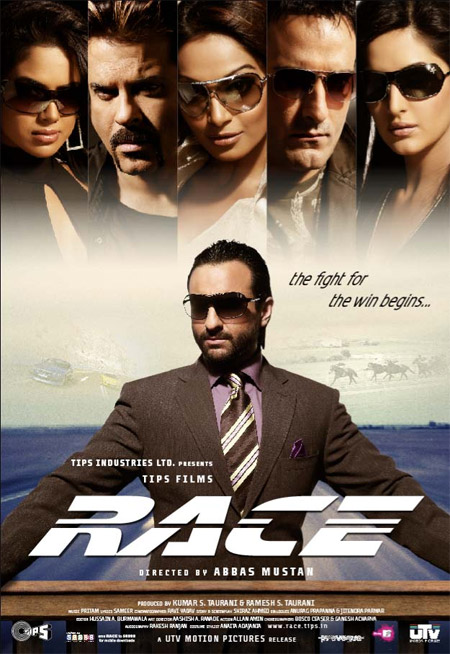 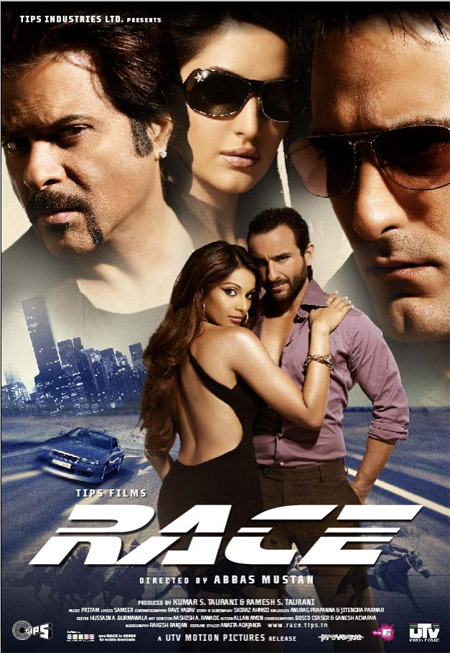 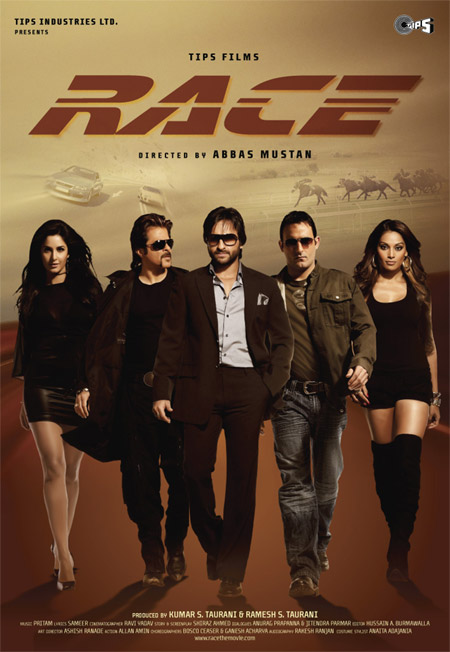 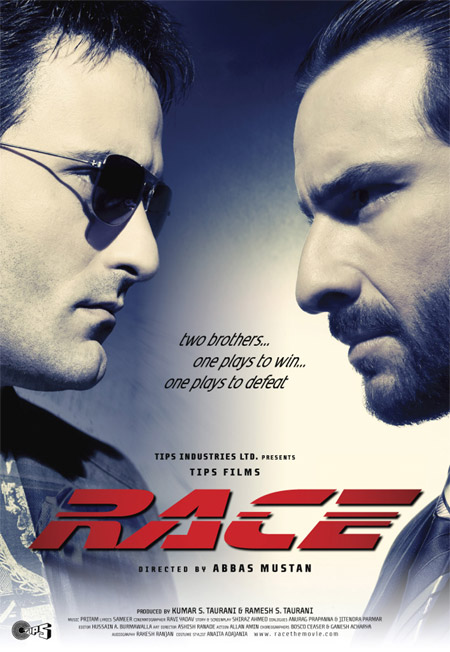 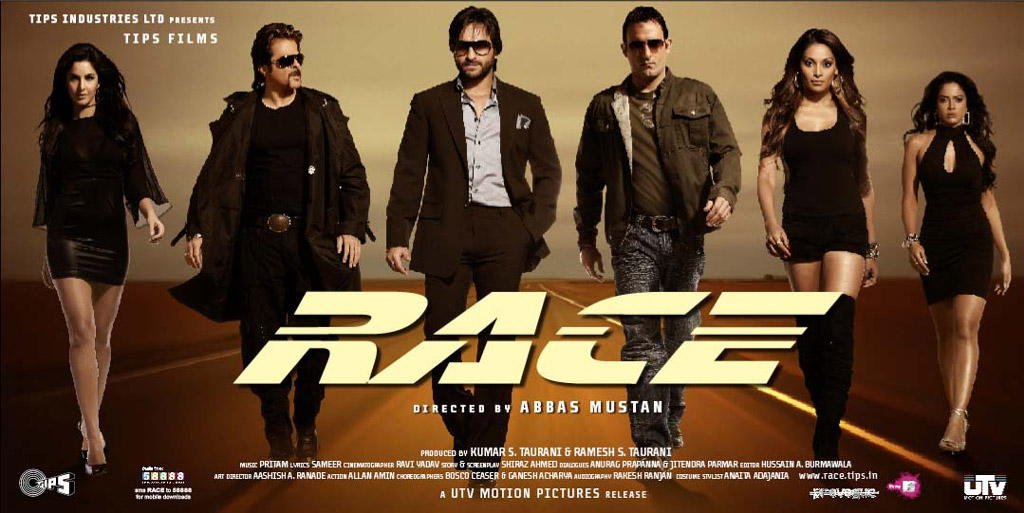 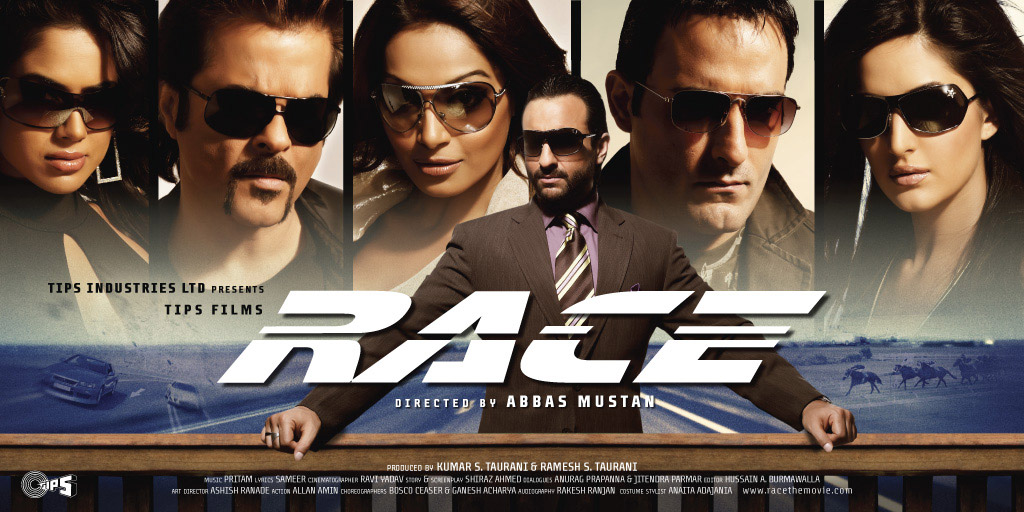