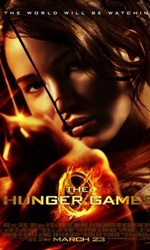 It is bizarre fact of our times that a film makes its first $100 million in pre-sales of tickets, even before it has released. Indeed, in the opening midnight screening a day before the release itself, the film grossed close to $20 million. Both these feats are unprecedented for any film.

Sadly, one cannot say any such good things about the film itself. And one is compelled to add, don`t judge a film by its box office collections.

In a country somewhere in the future, a nation indulges in a popular reality show called "The Hunger Games" where a male and female contestant from each of the 12 districts, fight to the death with only one final winner.

Katniss (Jennifer Lawrence), who voluntarily enters the game to save her younger sister and who belongs to the outer district 12, has no real intention to either kill or get killed.

To be fair with the film, it begins in a compelling way. The first hour and a half fly by in slow-paced, but well etched-out emotional and cinematic moments.

The dystopian world reminds you of the novel "1984". Indeed the film builds up to show class struggle and deprivation and of how the powerful control the meek though weird things like a reality show where teens kill one another.

It is, however, in the last half-an-hour that the film completely loses track to become a story of misplaced teenage love. The previous build-up is completely lost in the love-melee of the last half hour with the film finally losing steam in the end.

It thus deviates quite from the hugely successful novel of the same name written by Suzanne Collins. The book is an explicit critique and exposure of the class differences and class oppression that exists in society.

Sadly, the movie version cuts out most of those references which would have made the film that much more compelling and settles for cliches instead. It will be interesting to see how in the next parts, which clearly deal with the rebellion in society, the film will redeem itself.

But then it perhaps does not have to redeem itself and that considering the popularity of the book, this was always a safe movie to make. And it is not hard to see if this will appeal to people, especially teenagers.

In our worst moments, especially in the teens, we have rebelled in anger, wishing in extreme moments to kill someone. This film gives vicarious flight to that fantasy with teenagers literally going after each other`s throats.

The second reason for the film`s success would be the popularity of reality TV in our society. The third is that someone who has read the book and loved it would naturally want to see the film version at least once.

Yet to discerning viewers, it will remain a crying shame how a story and a film whose first half shimmers with such potential, is not realised in the end and of how a film that could have been "The Truman Show" for young viewers, simply whimpers away.

Indeed, don`t ever judge a book by its box office collections.