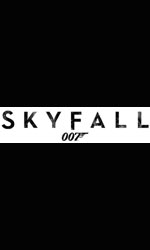 "Skyfall" starts off very much in the mould of an action film - basic plot of chasing bad guys with an abundance of crash, bang pyrotechnics, car chases, motorbike chase on roof tops, explosions, hanging from buildings and etc.

Half way through I thought this was going into my top three Bond films list, but suddenly all the plot potential goes out of the window and I could think of three Sean Conneries, three Roger Moores and even a Timothy Dalton above it in the list.

The first scene establishes the premise of the mission - James Bond (Daniel Craig), an MI6 agent, trying to retrieve a computer disk that contains the secret identities of embedded NATO (the North Atlantic Treaty Organisation) agents. In the process, while fighting the baddies on the rooftop of a train, Agent 007 is shot. He falls into a waterfall and is assumed dead.

Strangely he survives the fall.

Meanwhile, his superior M (Judi Dench), the head of MI6, writes his obituary.

But then Bond returns to London when he realises that his nation is in danger. After failing in his fitness test, he is "declared fit for active service" and is put back on the case.

Craig as Bond is believable sans his sex appeal. There is warmth in his demeanour and banter. Neal Purvis, Robert Wade and John Logan`s script constantly reminds us that Bond`s physical prowess is on the wane, but his verbal sparring, both with M and new foe Raoul Silva (Javier Bardem), a former agent turned vengeful computer hacker, is nimbler than ever.

Bardem`s performance as a flamboyant pansy villian makes him the oddest Bond villian ever.

Despite master technicians at work behind and in front of the camera, one is left feeling disappointed. I can only guess it was because they tried to do too much.

Cinematographer Roger Deakins beautifully captures the world`s most exotic corners - Istanbul, Shanghai, Macau, London and Scotland. But the pace of the shots canned by Mendes and Deakins, does not augur for an action film. It ends up almost like a noir film.

However, one-liners are pretty snappy and offer a chuckle once in a while.

"Skyfall" is not a perfectly structured film. It starts off at a fast pace and by the end it drags.

The last sequence is unbelievable and hence makes this film strangely ineffectual.

In SKYFALL, Bond’s loyalty to M is tested as her past comes back to haunt her. As MI6 comes under attack, 007 must track down and destroy the threat, no matter how personal the cost.