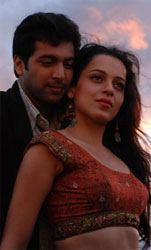 This last hurrah for celebrated cinematographer-director Jeeva who died during its filming in Russia betrays the fact that he didn`t complete Dhaam Dhoom.

Despite being technically sound, thanks to art director Thotta Tharani, the score of Harris Jayraj and combined cinematography of P.C. Sriram, Manikandan and Rajasekhar, the movie fails to impress as it looks more like a disjointed stack of picture postcard shots.

Gautam Subramaniam (Jeyam Ravi), a doctor is all set to marry village belle Shenbaga (Kangana Ranaut). He leaves for Russia to attend a medical conference days before his wedding and gets involved with a Slav seductress Anna (Kojernikova Maria). He gets sloshed with vodka in a nightclub and before he can say Das Vadanya (goodbye in Russian), the girl is found dead in his bedroom.

Gautam escapes from the custody of the Russian cops and after a painstaking investigation discovers that one of his benefactors pulled the strings with a deadly motive.

Harris Jayaraj has excelled himself and his work has been embellished by superb photography.

Art direction by Thotta Tharani lends credibility to even some of the patchwork done in Chennai.

Jayram in a surprising shade of grey has performed with aplomb.

And there end the plus points of the film.