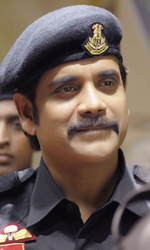 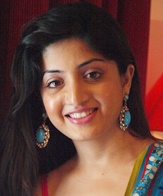 The Telugu film industry has always been at the receiving end for excess focus on commercial elements and illogical plots. Though there are a few exceptions, the number of breakthrough films have been much lesser in the industry, which is ruled by star system. But once in a while film like Gaganam surfaces and you are surprised to see audience applauding such attempts.

Gaganam has a superstar like Nagarjuna, who has completed 25 years in filmdom. Recently, he acted in a commercially successful film Ragada where he bashes up 25 villains at a time and dances with two scantily dressed actresses, who might be as young as his son.

But he should be appreciated for accepting an experimental film like Gaganam, and edge-of-the-seat thriller sans heroine and songs. It is also a fact that Nag has always encouraged young talents and happily worked in experimental movies like Shiva, Ninne Pelladhutha and others.

Nagarjuna`s brilliant performance apart, Gaganam steals the viewers heart because of the wonderful directorial work of Radha Mohan who has also written the story and screenplay. The director showed his brilliance in films like Mozhi and Abhiyum Naanum and with this film he has risen a few notches above to prove that he is one of the best creative minds in the Telugu film industry.

The concept of plane hijacking may not be new, but the way Gaganam has been narrated, it makes you feel that the film really belongs to the talented director. His script also touches upon many contemporary elements to show how TRP hungry channels use such incidents for their own advantage.

Partially inspired by Kandahar plane hijack episode, the film opens with a group of terrorists hijacking a Chennai-Delhi passenger flight makes an emergency landing at Tirupati Airport. They demand that a dreaded terrorist should be released from jail and and thus begins a game of intrigue and anxiety.

The politicians are worried about thier vote banks and the `babus` (government servants) don`t know how to save the passengers as they are controlled by the `netas` (politicians). While senior officer Vishwanathan and a national security officer are trying to negotiate with terrorists, the netas in Delhi decide to release the terrorist who gets killed in a road accident.

Finally, the situation is saved by a daring commando Ravi who executes a brilliant operation to free the passengers.

Nagarjuna is the heart and soul of the film. His stellar performance certainly deserves a big recognition. Prakash Raj has a brief role, but still makes a big impact with his energetic performance. Sana Khan too has a brief role.
Brahmanandam evokes a few laughs, but it is artists like Harsha Vardhan and Poonam Kaur who have delivered strong performances.

Technically also the film is brilliant. Art director has done a great job.

Gaganam is a must watch.