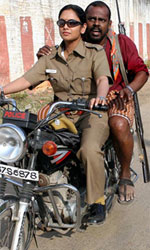 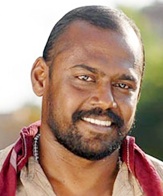 Director Moorthy, after his maiden venture Karuppasamy Kuthagaikarar, has chosen to do a light hearted film with Vediugundu Murugesan.

Though it is loud and predictable, it is fairly enjoyable thanks to Moorthy`s screenplay and Pasupathy`s and Vadivelu`s acting.

The film set in Keezharajakulam village in Rajapalayam is about a do-gooder, who gets into trouble for no fault of his.

Vedigundu Murugesan (Pasupathy) is a village youth. He earns his living fetching water for factories and hotels in his village. Though he Often gets into trouble for breaking the law, Murugesan escapes every time thanks to the kindness of the judge. Murugesan also takes care of Ponni (Deepa), who is mentally ill and deserted by her parents.

Enters Nachiyar (Jyothirmayee), a police constable who begins to like Murugesan.

Meanwhile Kodanchan (Raneesh), a local gangster, troubles Ponni and Murugesan beats him up. A mishap occurs after the fight in which Kodanchan gets killed and the blame falls on Murugesan.

Kodanchan`s brother Ganesan (Veera) vows to take revenge and the rest of the film is about a cat and mouse game between the two.

Morthy hasn`t chosen a new storyline but he has given a different treatment to the story.

He has consciously laced the narrative with satire. He has conceived some hilarious moments.

Pasupathy plays his part well. His body language and dialogue delivery are good. Jyothirmayee as his ladylove is competent. Veera and Raneesh are alright.

Vadivelu as Alert Arumugam (in a separate track) evokes laughter.

Dhina`s music fits with the tone of the movie -- loud. Bala Barani`s camera captures the dry lands of Rajapalayam and its villages quite well.

Pasupathy plays the role of a guy who supplies water to a restaurant. He is a small time thief, yet he has a passion for serious literature. Given his wayward ways he gets acquainted with a police officer, a woman. A bond of relationship brings them closer. The two never actually acknowledge the love that their friendship gives rise to.

It at this juncture that the hero meets a girl who studied with him in school. He is shocked to find out that she has lost her mind. He and his police friend decide to take her under their wing. What happens next? When the movie is out, catch it at a theatre near you, to find out!