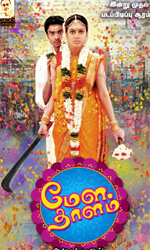 Adida Melam is an upcoming Indian Tamil Romantic comedy film directed by Anbu Stalin featuring newcomer Nischala Krishnan and Abhinaya in the lead roles. The shooting for the film was started on 1 March 2012. Despite being launched in 2012, the film went through production troubles and subsequently had a name change from Mela Thaalam to Adida Melam in 2016.