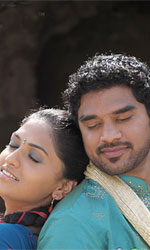 A lingering, soft romantic story has been told in a lacklustre manner in `Yathumagi`, robbing it of the beautiful feeling that usually stays with viewers after watching a movie of this genre.

In the film, Sachin plays an advertisement photographer who belongs to a rich family. But his problem is that wherever he goes, he invariably gets into trouble and is bailed out by his powerful family. He never thinks before embarking on any mission.

Sunaina is a simple girl, whose world revolves around her family members and the inevitable idiot-box. She falls in love with Sachin, but the mercurial young man ignores her feelings.

Eventually Sachin falls in love with her, but his ever-so-callous attitude poses threat to their relationship when some relatives turn against them. What happens in the end is revealed in the climax, but not in so enterprising manner.

It seems due to lack of imagination, director Balakumar has presented many sequences in a cliched manner and it reminds audiences of the scenes they have watched umpteen times in several movies in different languages.

The reason shown for Sunania falling in love with Sachin is childish.

Sachin fails to impress with his performance. It seems he hasn`t effort to look `different` and wear varying expressions in the sequences.

Sunaina looks amazingly beautiful and absolutely ravishing in the typical Tamil costume, paavadai-dhaavani. Her facial expressions and her picture-perfect image are the highlights of the otherwise dud fare. She has also made a decent attempt to act and passes off in her facial expressions.

Azhagan Thamizhmani as Sunaina`s father goes over the top while enacting his part. Riyaz Khan, who plays Sunaina`s brother, has been wasted in an insignificant role.

James Vasanthan has churned out few melodious numbers. Kudos to him!

Director Balakumar falters very badly with his screenplay and dialogues. In short, "Yathumagi" is a dull fare