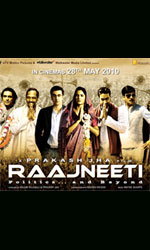 In Prakash Jha`s sweeping, damning and definitive look at Indian politics and its power-hungry players, Sarah Thompson is Ranbir Kapoor`s Irish-American girlfriend who suddenly finds herself thrown into the vortex of murky Indian politics.

Jha, known earlier for his deft Devgn-helmed Bihar-centric political thrillers Apaharan and Gangaajal, this time explores the Mahabharata for a look at the way politics in our country governs almost every aspect of existence.

Thompson`s shocked realization of the immoralities of Indian politics cuts across the audiences` perception of the world bathed in blood and corruption.

Raajneeti has more characters lunging for the ballot box than the popcorn-nibbling audience can keep track of. A taut, clenched drama of devastating nemesis, Raajneeti moves across its epic-inspired canvas with a vigour and velocity that sweep audiences off their feet.

The way Jha captures the parched, dusty, bustling energy of political rallies is impressive. This is no amateurish attempt to yoke the Mahabharata with Indian politics. The truth-defining moments in Raajneeti are truly shattering. The lies that co-writers Anjum Rajabali and Jha`s characters live have ricocheting ramifications.

Jha delves deep into the characters` conscience to emerge with penetrating insight into the corroded heart of the Indian body-politic.

But his storytelling never touches those nerve-ends in his narration where his characters would have actually expressed what they feel. A sequence like the one where the mother-figure (Nikhila Tirkha) meets her illegitimate son (Ajay Devgn) for the first time is more interesting for its dramatic possibilities than their actual realisation.

The criss-cross of relationships is an intricate tapestry of trust, betrayal, murder and atonement. But no character is allowed ample space to express his or her innermost desires and ambitions.

Katrina`s character, for example, is so underdeveloped that we never know what she really wants to get out of her space in life. The brutality with which she is shoved by the male characters - from rebuffed love to a marriage of political convenience to a widowed political career - is a plot of immense dramatic potential, alas sketchily realized.

We see Jha`s gallery of dynastic politicians in all their ruthless glory. But we never get close enough to them to connect with their lust, greed, pain, anger and hunger.

The squalor and ugliness of Indian politics is put on screen with cutting immediacy. There are interesting side characters, like the ambitious female politician from Sitapur (Shruti Seth) who uses sex for barter, and women newscasters, rallyists and petty politicians played by actors who seem to know the world they are meant to occupy from the fringes.

The trouble with the over-laden plot is that all the major characters clamour to be individualistic. They are unique in their portrayal of political clichés.

What really elevates Raajneeti to the level of a powerful political parable of our times are the performances. Nana Patekar, Manoj Bajpai, Arjun Rampal and Ajay Devgn get a firm grip over their characters and carry their tumultuous karma to a logical culmination.

Katrina comes into her own in the last 15 minutes. She looks vulnerable and resplendent as a girl forced to put power over her heart. As for Ranbir, he is actually the backbone of Raajneeti. He brings a reined-in, steel-edged ruthlessness to his character. For sure there is no other actor from his generation who could have played this character.

The pair`s goodbye sequence at the end is so deftly handled, you wish there were more moments between the two.

Raajneeti is not just a film that opens up the tattered edges of Indian politics. It dares to walk right into the muck with restraint, vigour and some sensitivity. The film has some outstanding cinematography by Sachin Kumar Krishnan. The camera seems to be looking into places in the characters` psyche that perhaps even the screenplay isn`t aware of.

Anurag Basu 'amazed' to see the child in Big B

Director Anurag Basu says he is amazed to see the child within megastar Amitabh Bachchan is alive.Read More

I was quite a dreamer as a child: Katrina Kaif

Geared up for the release of her new film "Jagga Jasoos", a musical directed by Anurag Basu, Bollywood actress Katrina Kaif says she was a dreamer as a child, and preferred watching children's cinema rather than reading comic books when she was younger.Read More

It is the story of Bhaskar Sanyal (Naseruddin Shah), the fire-brand leftist leader, as feared for his single-handed ability to challenge the most powerful of leaders as he was respected for his political integrity. Until one private mistake of his hurtled him into a self-imposed exile and spawned a secret consequence that shook the destiny of the political future of the state.

And of Sooraj (Ajay Devgn) who rose from the backward classes - with anger in his heart and leadership on his mind. And yet, his destiny could never overcome the tragedy of his birth, trapping him in a terrible dilemma where his loyalty to his friend threatens to destroy his own family. Of Brij Gopal (Nana Patekar), who shunned every political ambition even as he continued to mentor and guide the younger generation of leaders while the battle got bloodier by the day?

It is the story of Prithvi Pratap (Arjun Rampal), heir to a powerful political legacy and impatient to seize the top position. A man with a heart of gold but who is all brawn. A man whose uncontrollable passions bring his family to the brink of political extinction.

And of Veerendra Pratap (Manoj Bajpai), whose lunge at the throne was thwarted even as he was within striking distance of it. A man who believes he was born to rule, and who will now stop at absolutely nothing to claw his way back to the top.

Of Indu Sakseria (Katrina Kaif), the princess - beautiful, passionate, arrogant. She had only one all-consuming love. Little did she know that her personal happiness was dependent on the changing electoral fortunes of her love, and that even a slight shift in the faultiness of political negotiation would cause a devastating earthquake in her personal life? And yet, this spirited never-say-die diva rose from the ashes of her tragedy to challenge every contender, over-turning the political future of the state.

Of Sarah Jean Collins (Sarah Thompson), who came from one of the bloodiest and most violent places of earth? Who escaped from there, bruised, hurt, and fell in love with a soul-mate who shared a similar legacy. And her abhorrence for it. And yet, when he was sucked into his destiny, this innocent bewildered girl`s private world was thrown asunder.

And, it is the story of Samar Pratap (Ranbir Kapoor), the ultimate outsider. The apolitical conscientious objector, who got reluctantly sucked into the battle-ravaged arena of family rivalry. Only to turn into a master of the craft of political warfare. It is the story of the woman that he loved, and the one that loved and lost him. It is the story of his determined and fierce fight to protect his family. Of the bloodiest of final battles in a war alien to his character. It is the story of a man`s descent into the moral hell that is Indian politics.

It is the story of a fiercely fought election campaign, where money-power and corruption are the accepted norms, and where treachery and manipulation are routinely used weapons. As the personal drama of these conflict-ridden characters unfolds against this gritty backdrop, love and friendship become mere baits, and relationships get sacrificed at the altar of political alignments. The darkness that rises from their soul threatens to envelope all that they hold precious. Until eventually, in the crescendo of increasing violence, the line between good and evil blurs, making it impossible to distinguish heroes from villains.

Raajneeti is the story of Indian democracy. And its ugly underside. It is about politics. And beyond. 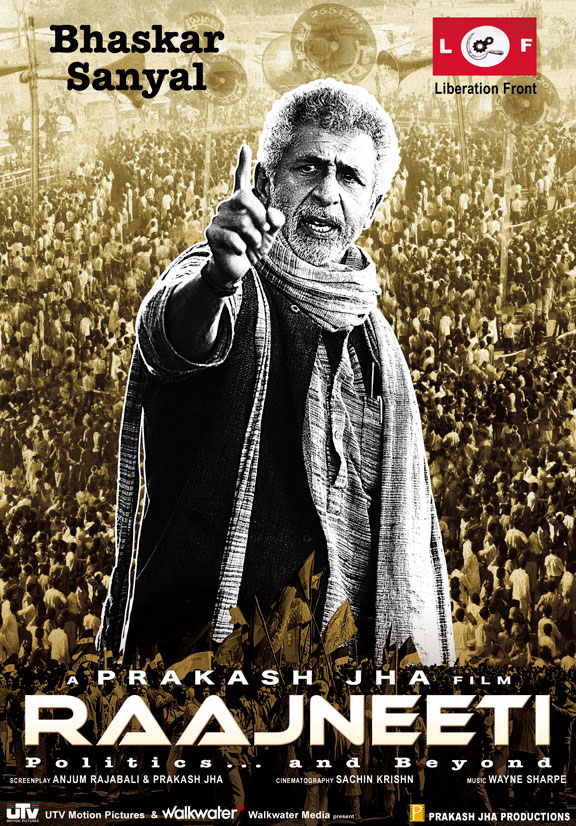 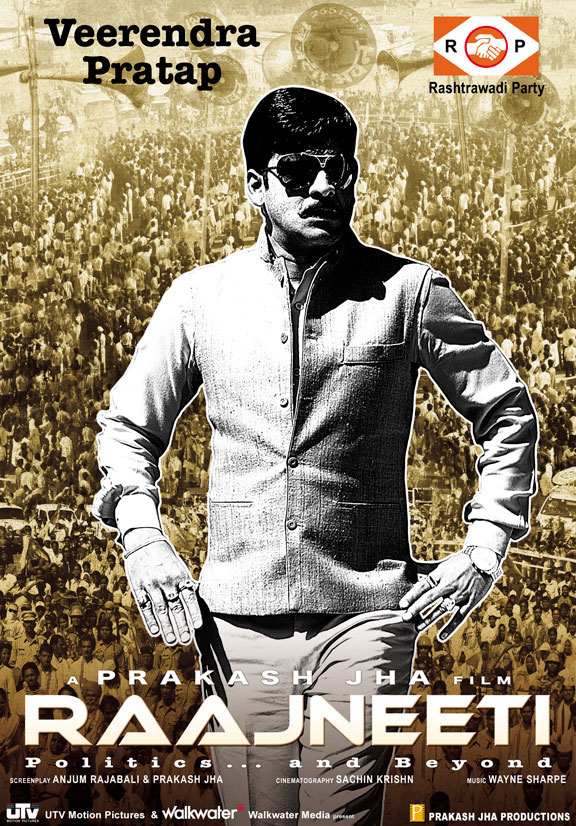 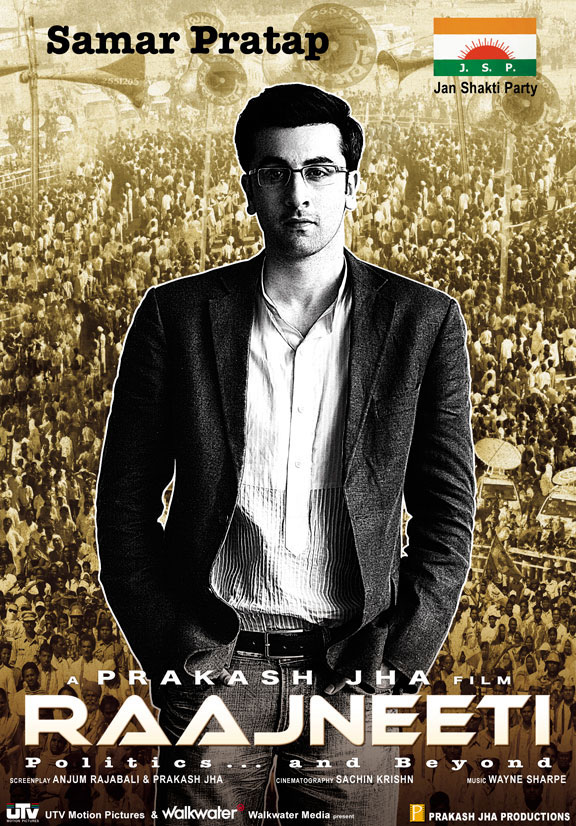 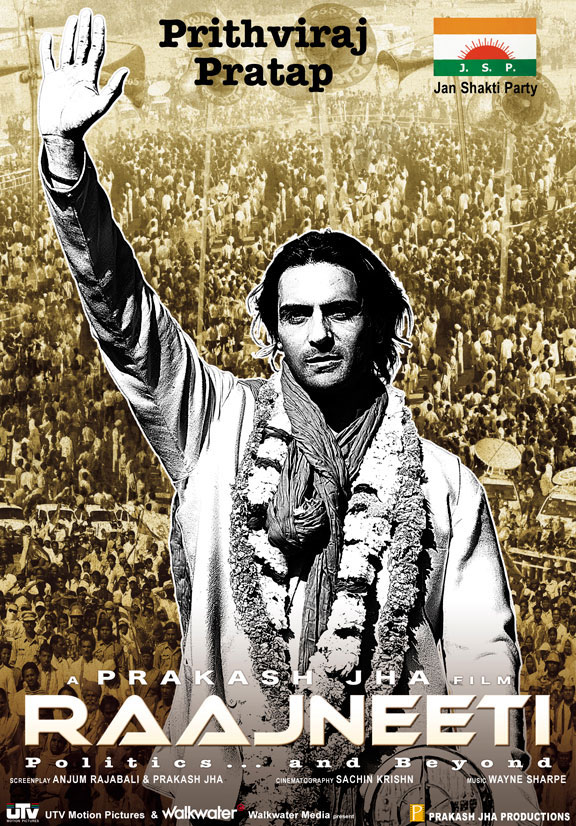 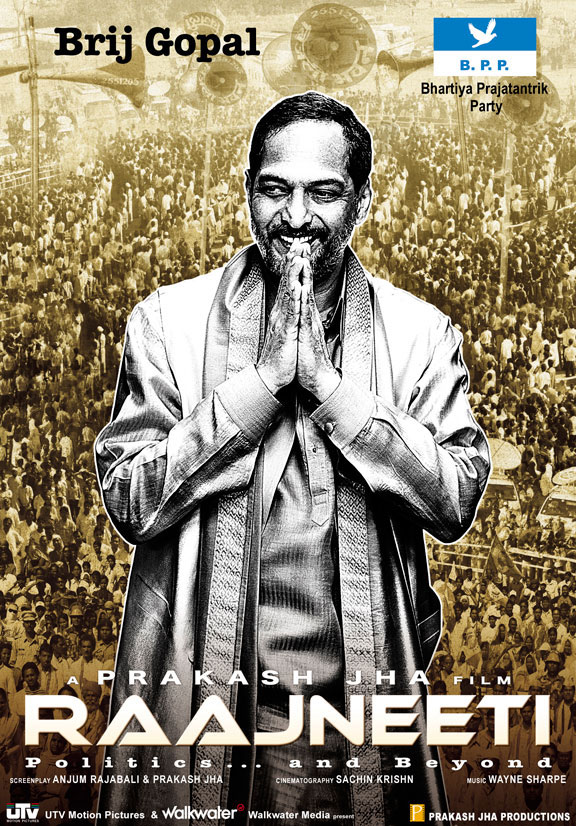 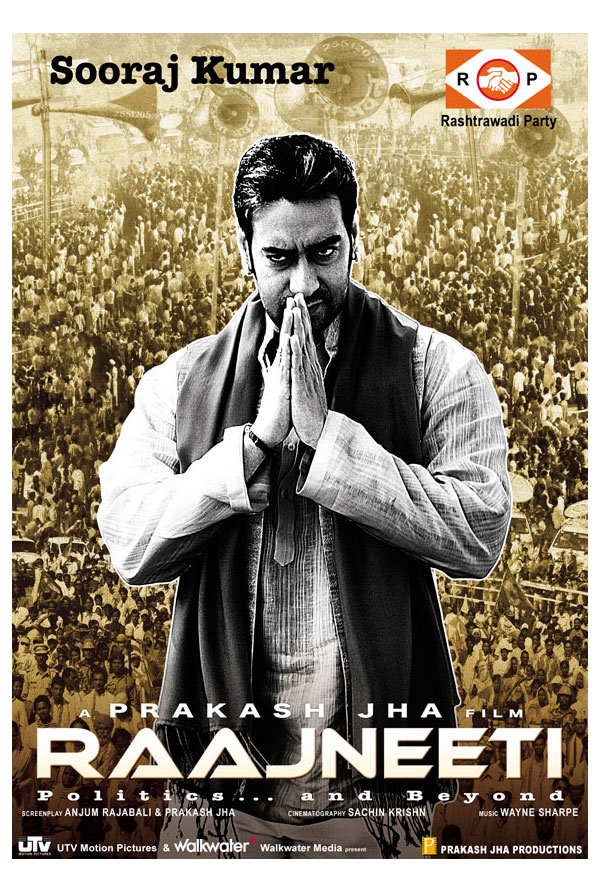 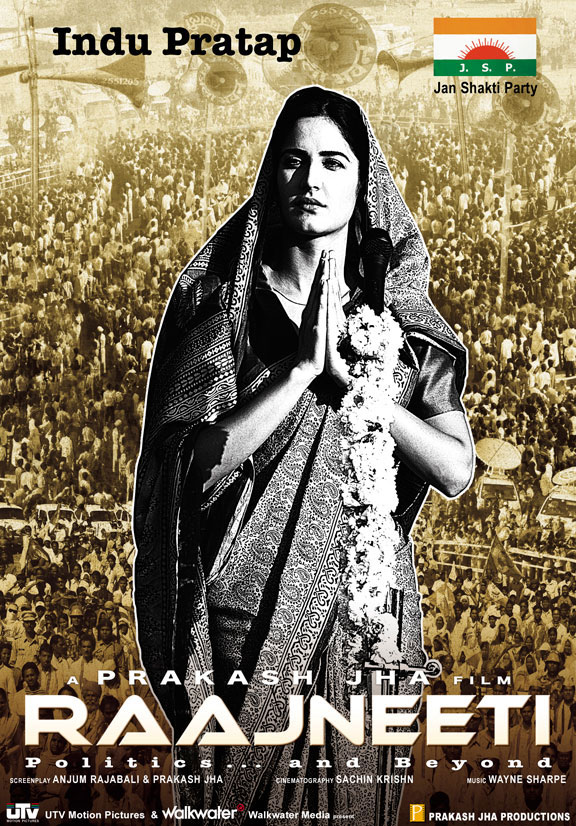 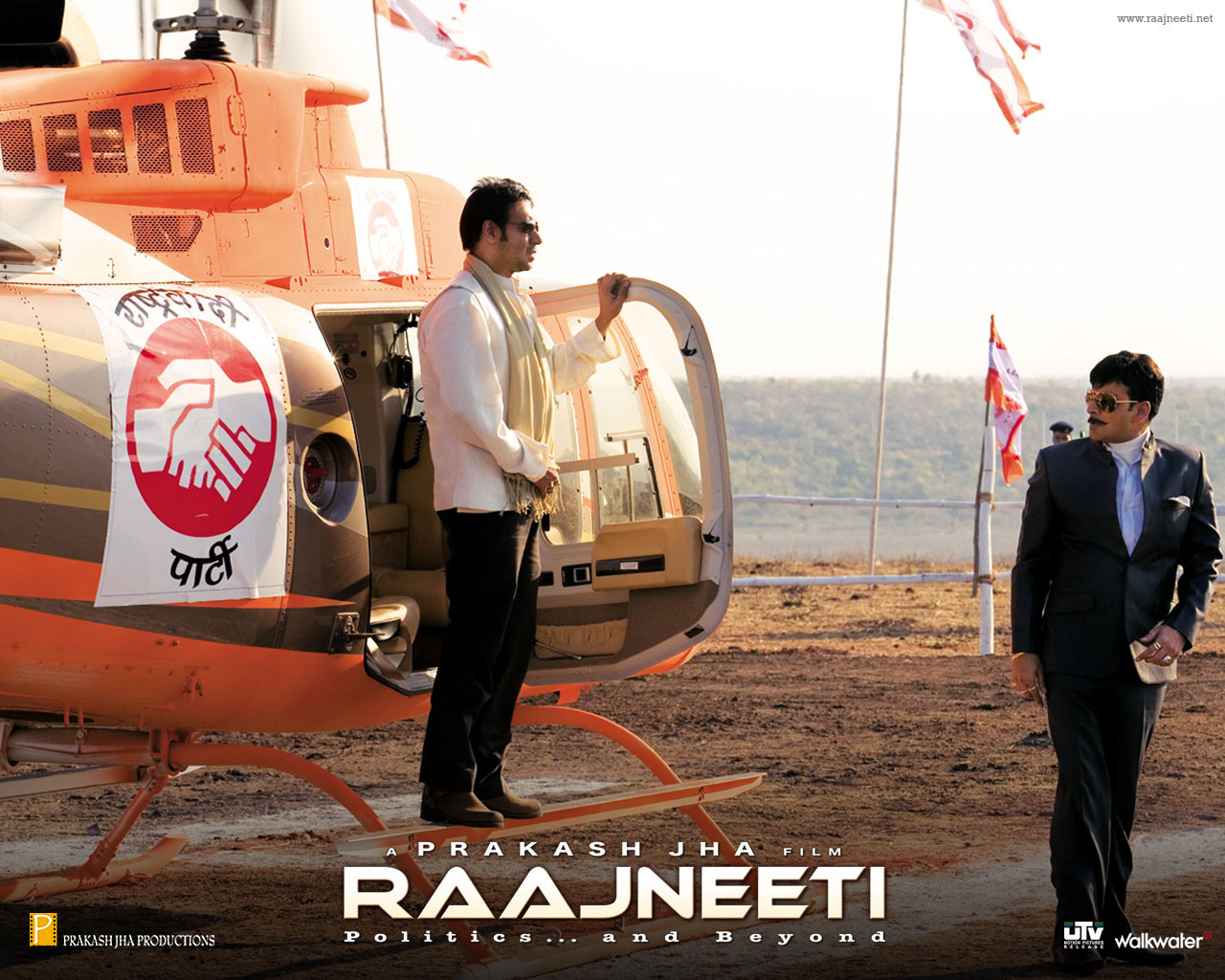 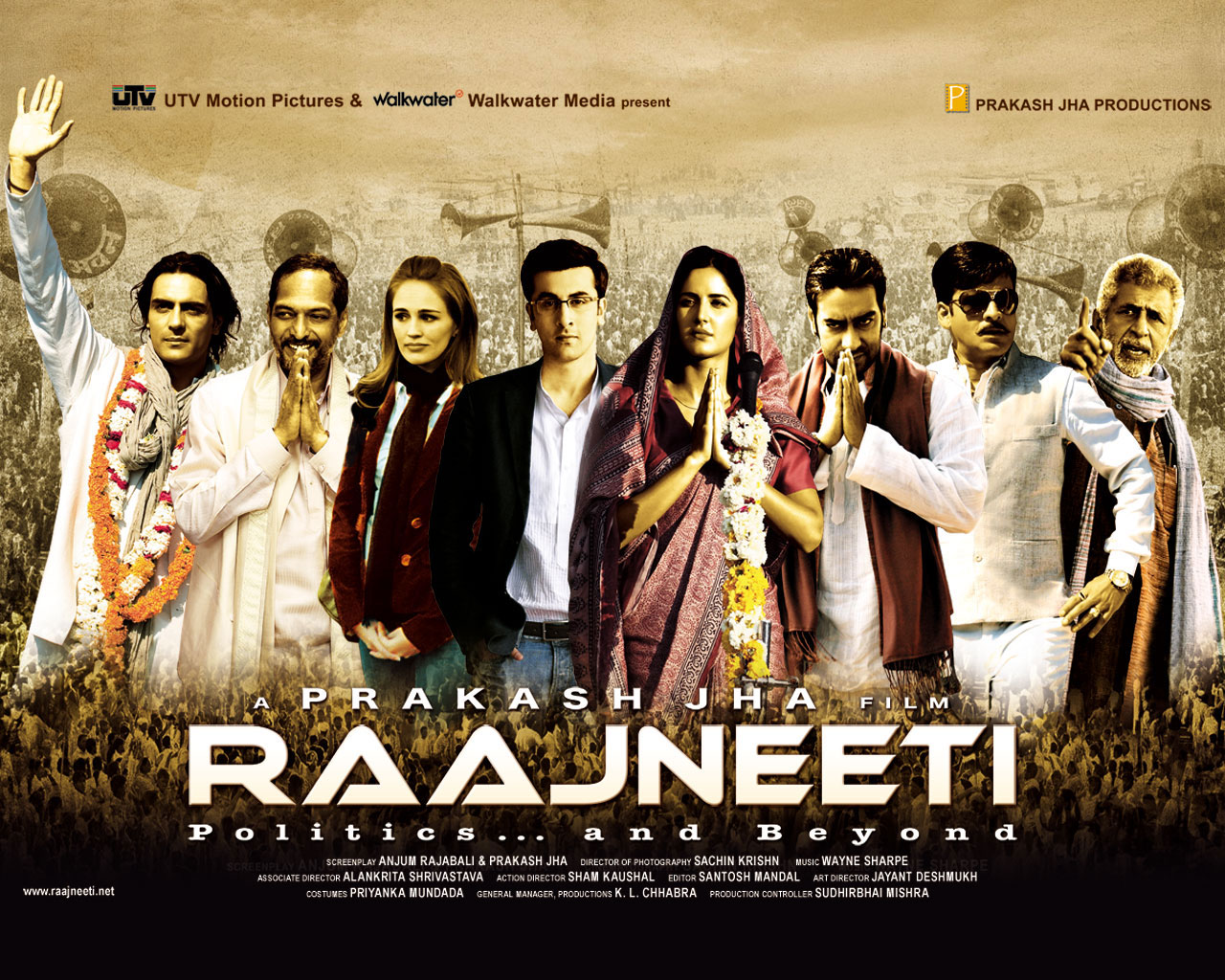 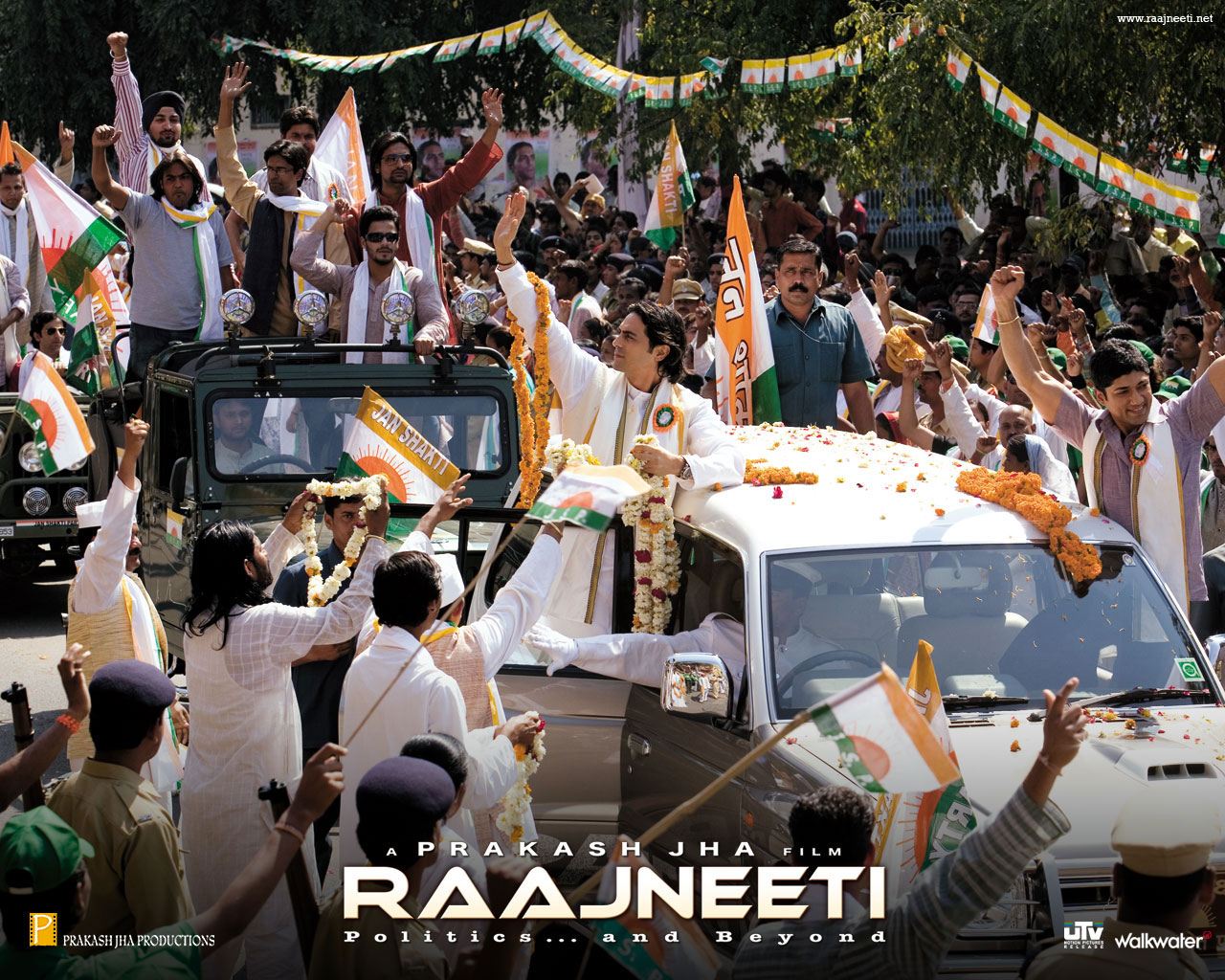 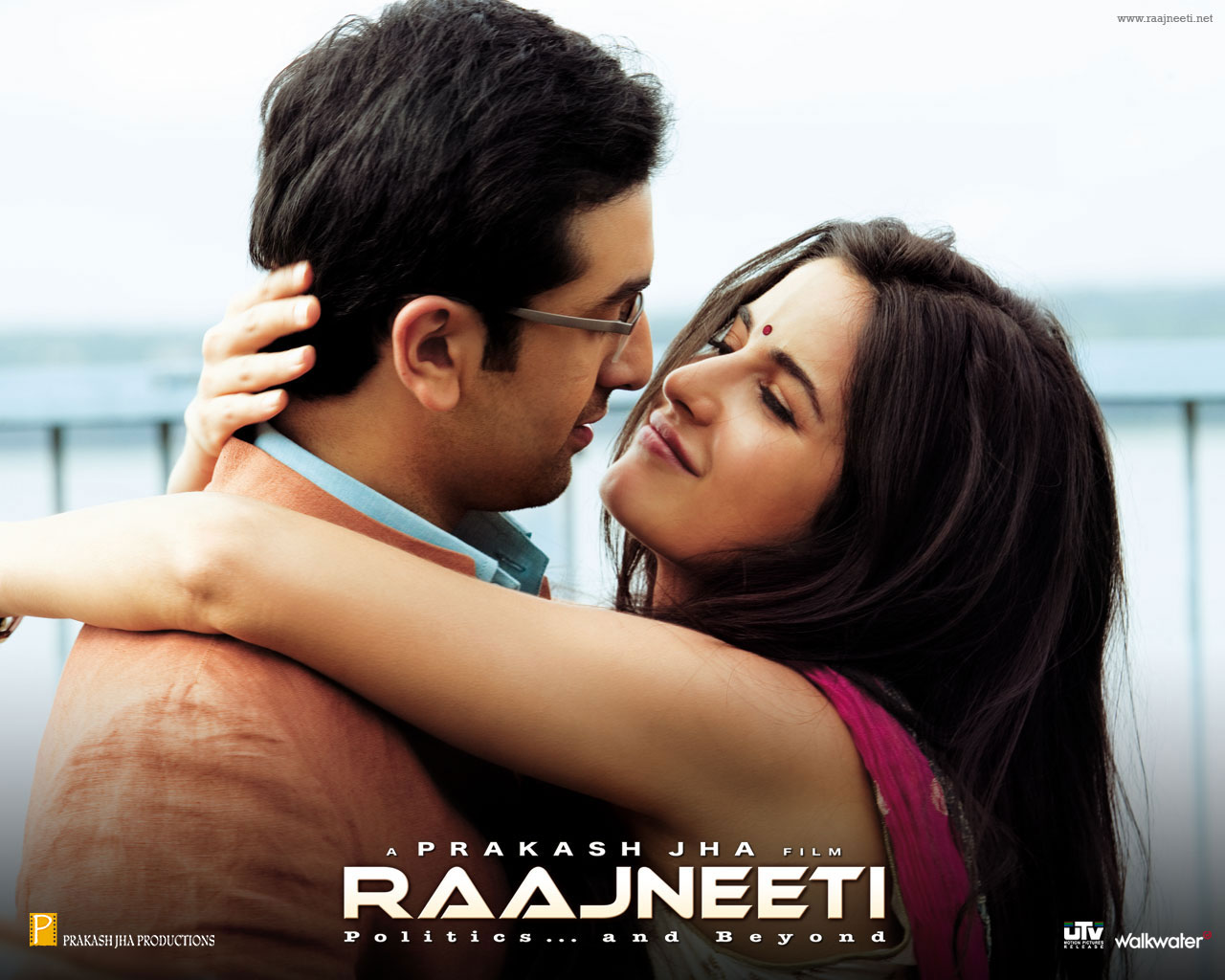 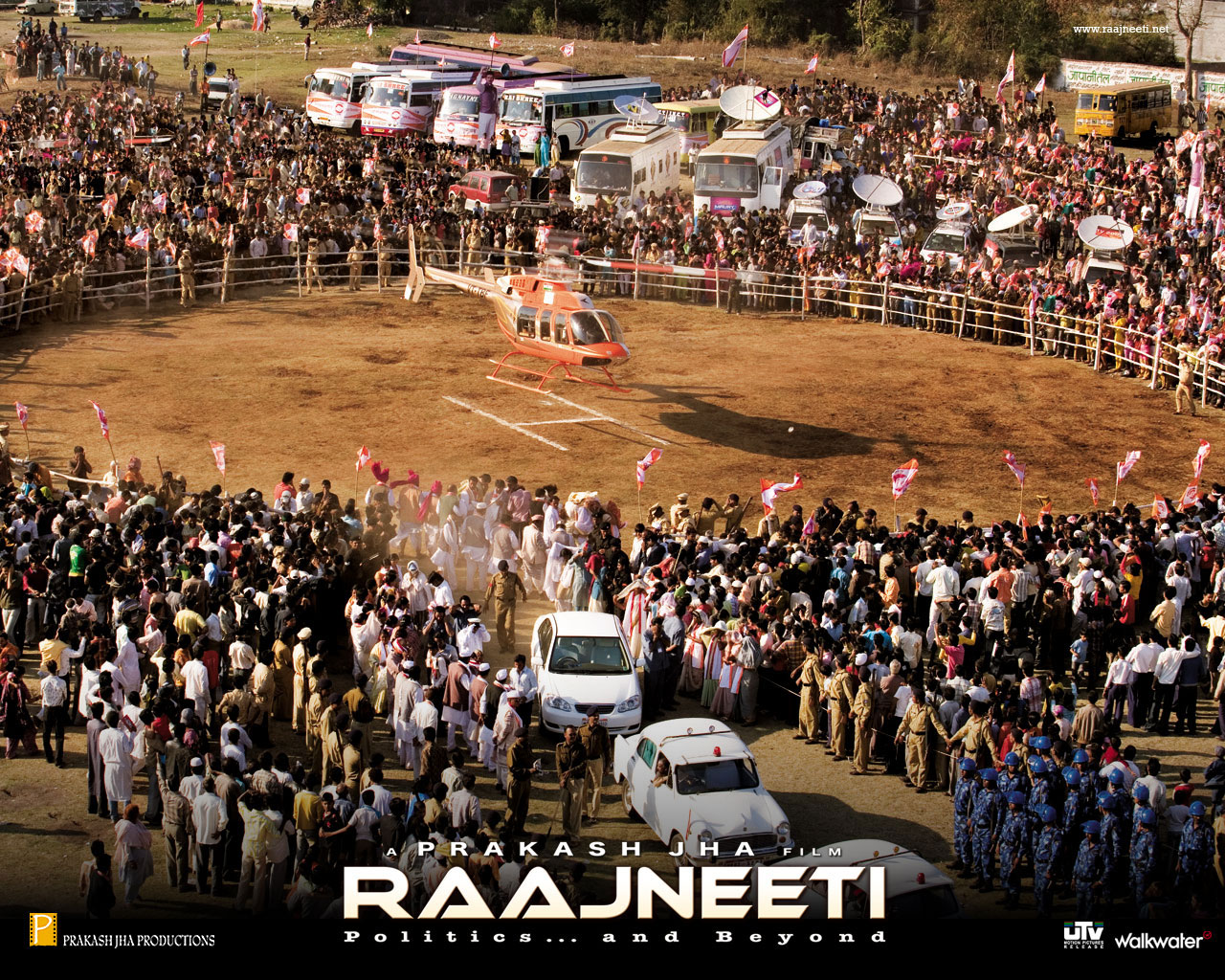 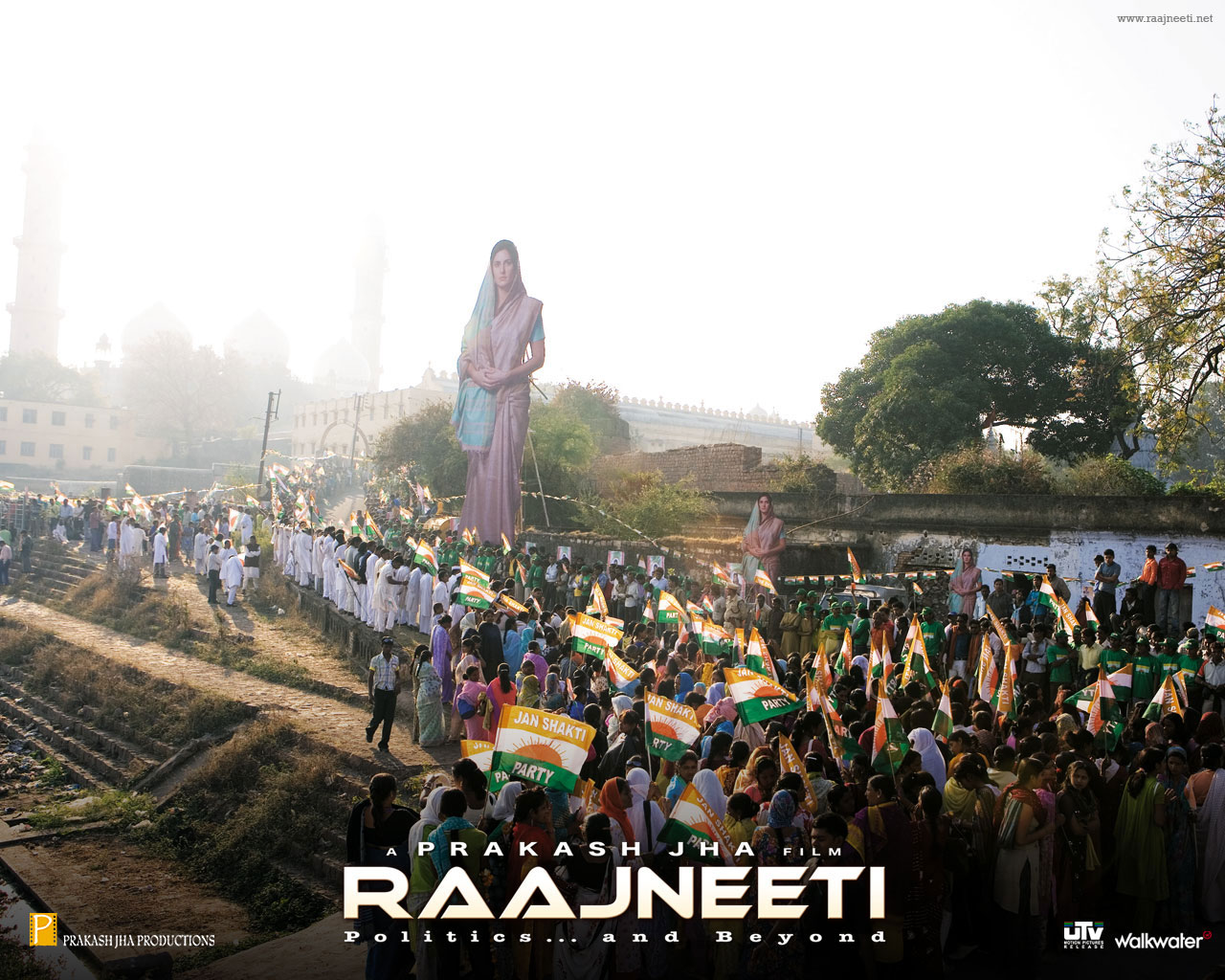