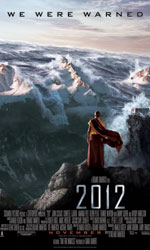 Will the world really end on December 21, 2012? Nobody has a clue. But thank god, the Mayan prophecy gave the makers of this solar-plexus-aimed colossal spectacle a chance to pull out all stops and design the greatest grandmother of all disaster epics.

Everything that we`ve seen in the genre, including Roland Emmerich`s own hefty contribution to invoking large-screen disaster in Independence Day and The Day After Tomorrow, pales into insignificance as the doomsday prophecy becomes a takeoff point(quite literally) for a huddle of characters trying to escape to safety in a world that had decided to end.

The plot is frequently trite and predictable. The characters are uni-dimensional. The broad heroics are so outlandish and over-the-top, we are often looking at the spectacle not as a facsimile of life but a comic-book world come to panoramic life.

For sure, the uncertainties about the plot gradually wane and recede, as the world as we know it and as Emmerich`s cinema defines begins to peel, crack up and fall apart at the seams right before our bewildered eyes.

Would it be right to say the stunning cinematography and special effects preside over this passionately-constructed pyramid of disaster escape and redemption.

The suspense element is as steep as some of the vertical heights that the narrative climbs and slips away from, as layer after layer of lavish longitude lumbers before our eyes.

Awesome is the word for what Emmerich has achieved in the film. The core group of characters naturally escape unscathed even when the world collapses inches away from them. But that`s okay. The film never lets us forget the cinematic splendour of the director`s vision.

Emmerich designs the canvas as a big and bewildering ode to biblical grandeur of the motion picture. Mountains explode, seas collapse and skyscrapers crumble like house of cards. There is never a dull second in the scintillating synthesis of stunning stunts and heart-warming moments among characters who are this close to death.

There are two heroes in the plot. John Cusack as the estranged husband and father who gets a chance to rescue his family, and Chiwetel Ejiofor holds the vast cast`s anxious motivations in place. The supporting actors are all experts at making the devastation hold together.

2012 is a roller-coaster ride into a modern day Noah`s Ark where space shuttles take handpicked humanity to safety away from the destruction of civilization as we know. But before apocalypse, there is this film.

Never before has a date in history been so significant to so many cultures, so many religions, scientists, and governments. 2012 is an epic adventure about a global cataclysm that brings an end to the world and tells of the heroic struggle of the survivors.