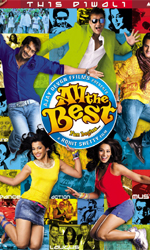 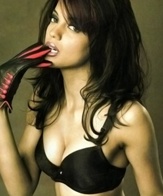 All The Best Review

In his first really decent and meaty role since "Munnabhai", Dutt gets into the satirical groove effortlessly and fluently playing a visiting Bade Bhaiyya from abroad whom his kid brother Fardeen Khan (tolerably befuddled) must fool into believing he`s married and decent.

The guys in Rohit Shetty`s comedies are anything but decent. Rascals and rogues of the first order, Devgn and Khan are splendidly supported by a sparkling cast of comic actors ranging from Asrani to Johnny Lever to the wonderful Ashwini Kalsekar (remember how cheesy and charming she was in Rohit Shetty`s "Gol Maal Returns?") to Sanjay Mishra (as a zonked out wannabe householder who says `Just chill` as though his tongue had just been through a sugarcane-juice machine).

The screenplay (Robin Bhatt) juices the material for all it`s worth. The constant flow of cheesy-breezy dialogues is littered with high-school humour but blessedly no vulgarity. This is one comedy you could take your mom to see without once walloping a wince into the wanton soup.

The burlesque is fast-paced though surprisingly restrained and has room galore for PJs. The one-liners are so silly and graffiti-like in their basic humour, you can`t but titter at the trivia wrapped in gloss that makes welcome room for Pritam`s pacy music without getting in the way of the one-liners.

So ok. This one doesn`t leave you... er blue in the face. The comedy is purely situational and the style purely `Rohit Shetty`. That means a bit of slapstick, a bit of that rapidly-moving tongue in the cheek, and a lot of Ajay Devgn.

And if you add Sanjay Dutt to the bubby buncy comic brew... man, you`ve got a show that`s on the road from the word go. This time the setting, if you must know, is Goa.

Shetty doesn`t use the touristic spot as a character. You suspect he places his colony of characters in the Goan location so they could all be camera-framed into a streamlined stampede.

There are only three female characters in the show, the rest are all guys playing conmen, goons, gangsters, wheeler dealers, warriors and worriers all of whom display an exemplary comic strength.

Sanjay Dutt gets it right after a long time. He has a lot of fun doing his part and he lets us share his enjoyment. Ajay Devgn`s comic timing has gotten rapidly dead-on under Shetty`s tutelage. He gives Dutt tit for tat, and then some more.

Not all the material is uniformly amusing. Towards the finishing line you do begin to wonder how much longer it would take this wonky wacky world of wispy and reparable wickedness to set itself right.

All The Best Synopsis

Veer (Fardeen Khan), A singer in greed of extracting extra pocket money from his step-brother Dharam (Sanjay Dutt), A business- honcho from London, tries to lie about his single status and puts it forth as `Happily Married` with Vidya (Mugdha Godse), Who he is in love with. His friend Prem (Ajay Devgun), A concept car expert, lends a helping hand in this falsely embossed projection. Prem is happily married to Jhanvi (Bipasha Basu) , who takes care of his Ancestors` out dated `CHOPRA GYMNASIUM`. Veer and Prem land up in debts as they had opted for a short - cut to earn easy money.

Watch the fun unfold as both get into a bigger soup when dharam pays a sudden visit to their place. Time does not give a chance and circumstances create such situations that Jhanvi is mistaken as Vidya and Vidya as Jhanvi.. Soon the two start juggling between prolonging the debt payment to a local don, Tobu (Johny Lever), and convincing plus pacifying Dharam about the false status.

The outcome is a rib-tickling comic situation where veer and prem handle the unexpected incoming characters  arriving at their place and coping with acquaintances while they boast and cover up with lies in this hilarious comedy of errors.

All The Best Poster 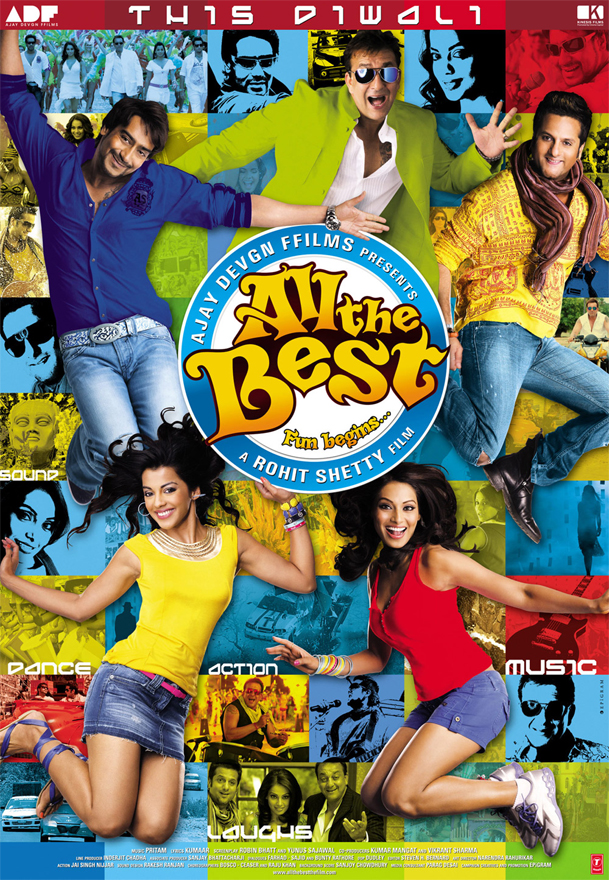 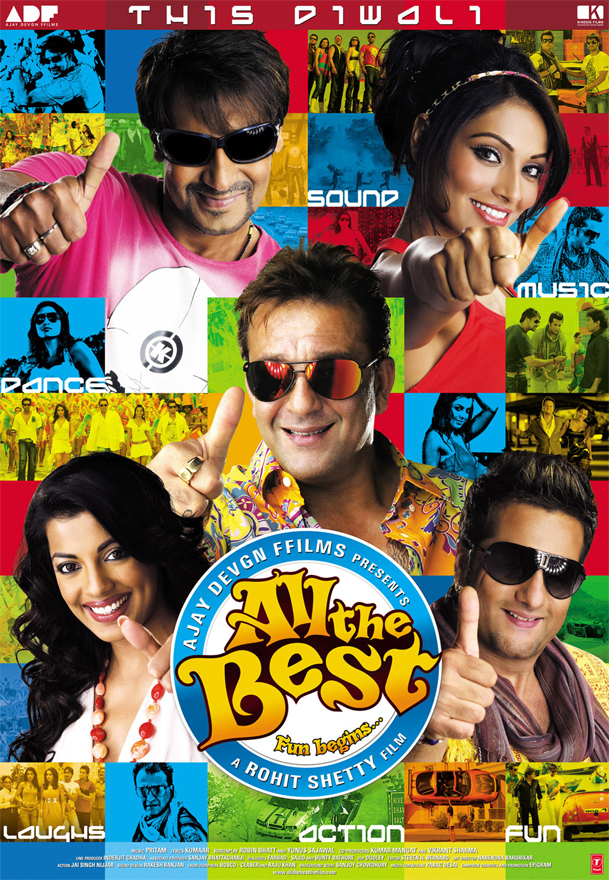 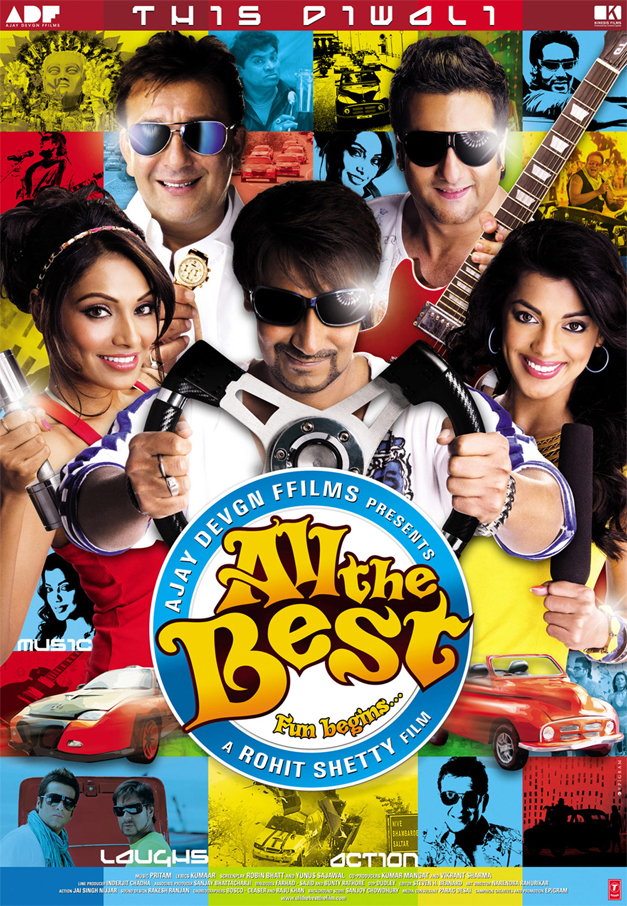 All The Best Wallpaper 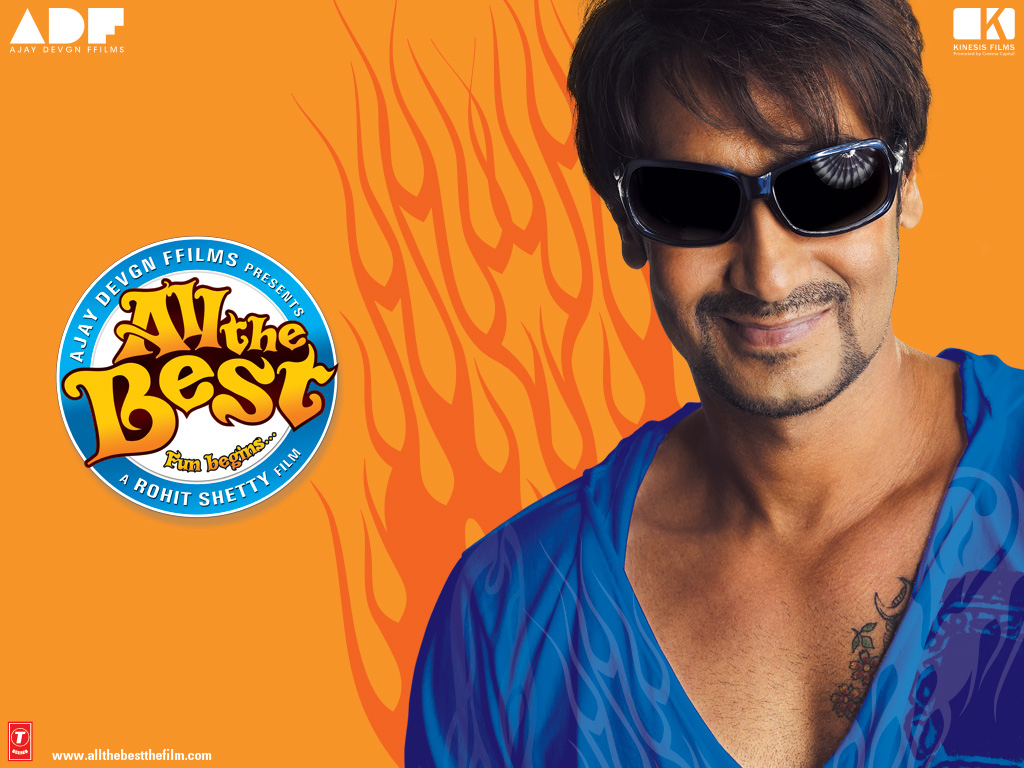 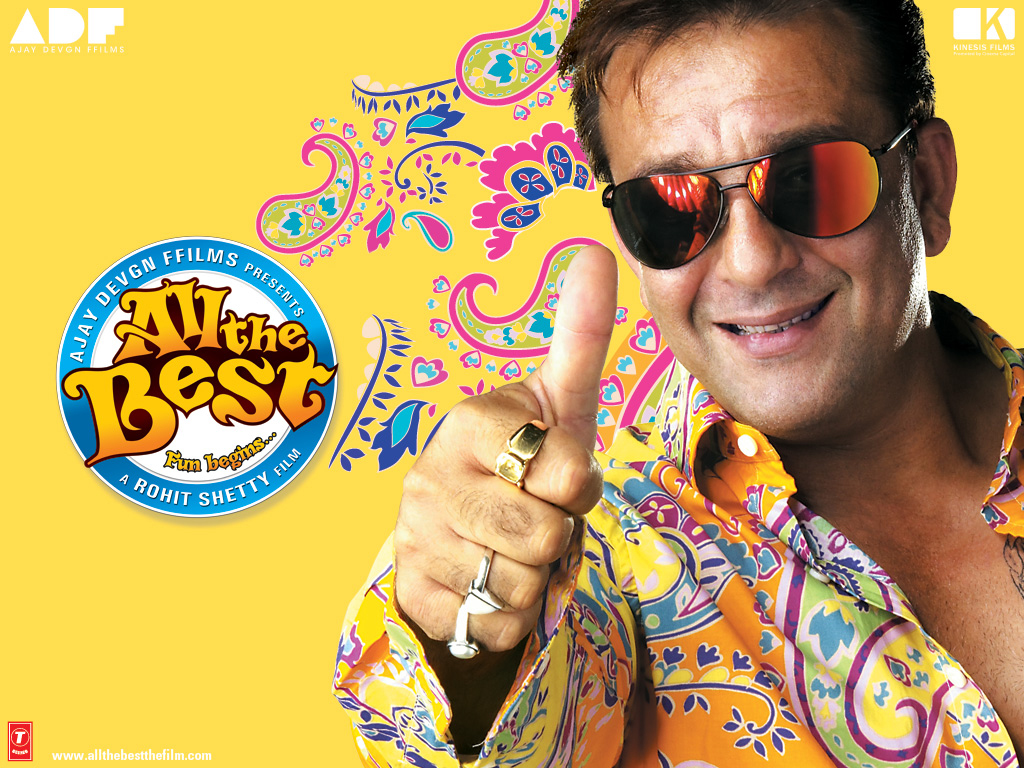 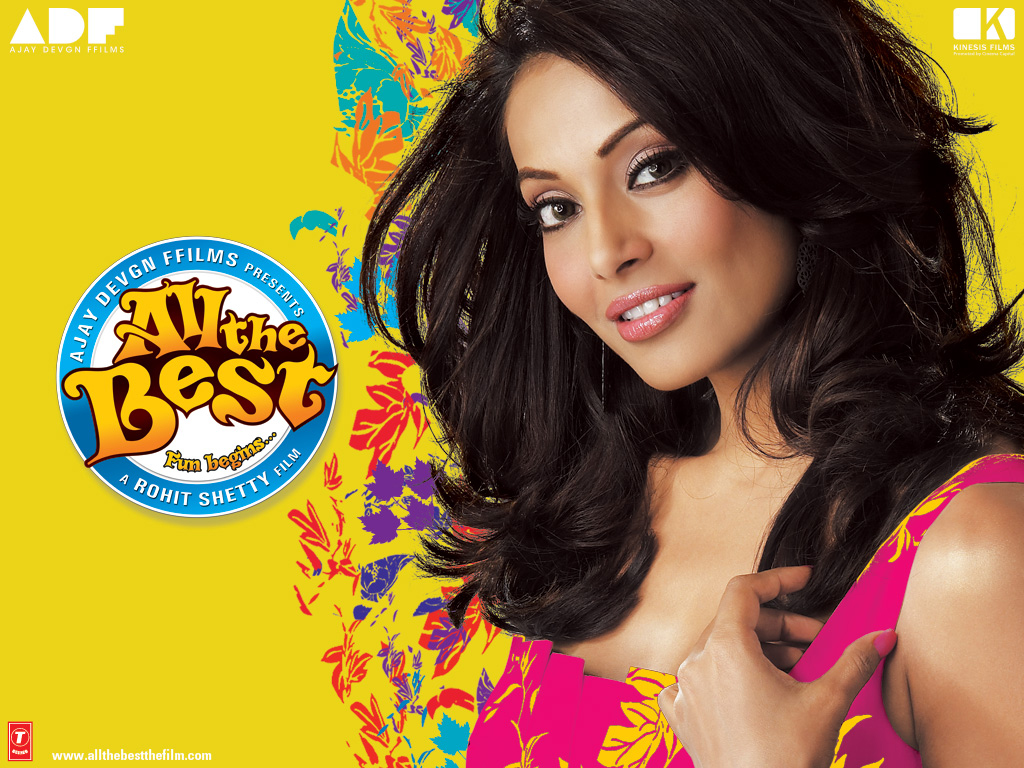 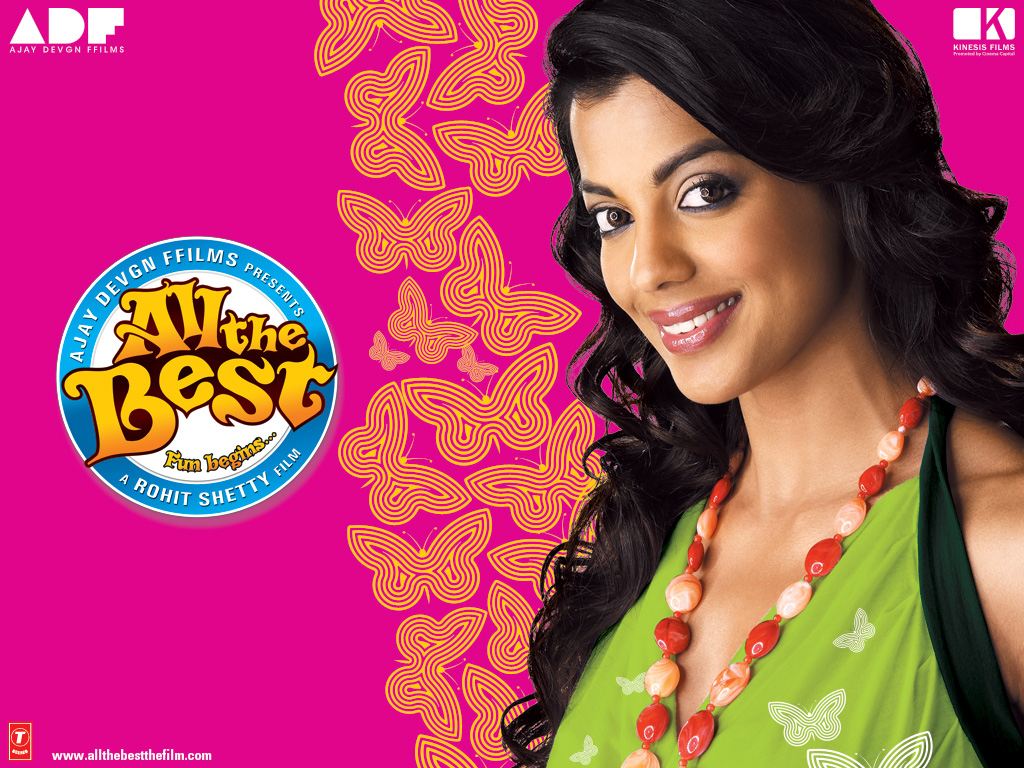 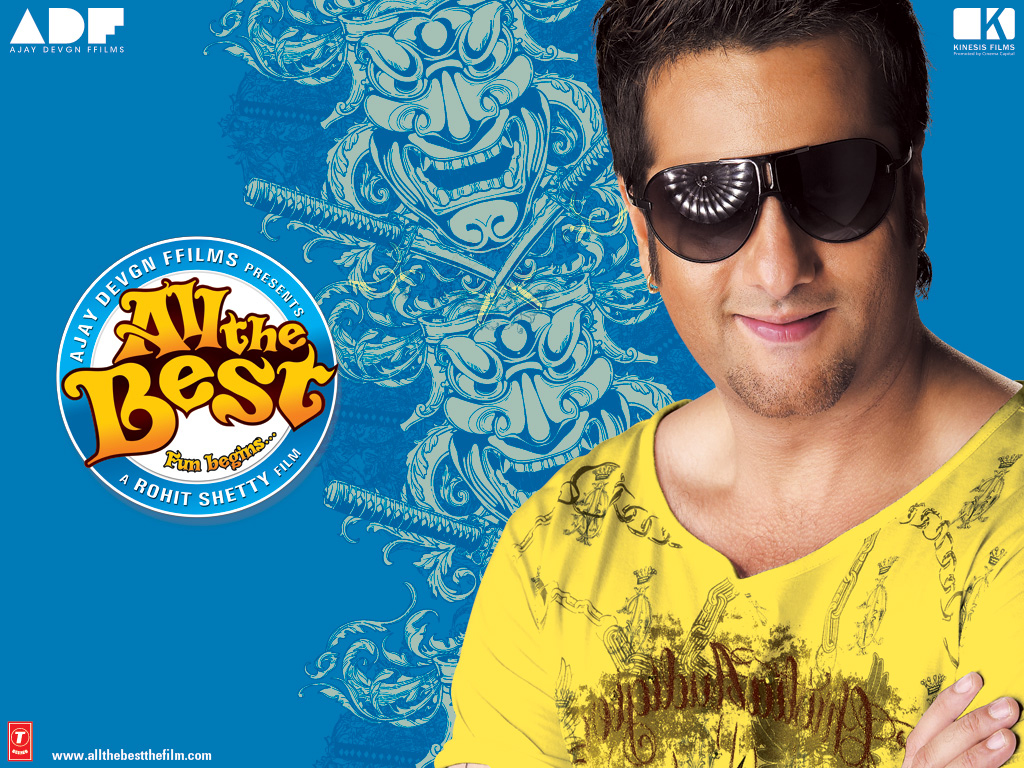 All The Best MOVIE EVENTS

Press meet of 'All The Best ' Movie

Ajay Devgun and Bipasha Basu promots 'All the Best ' move