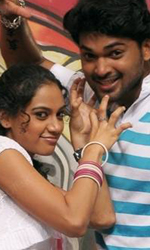 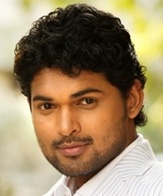 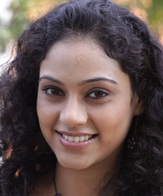 Cheers to young filmmaker Nandhini for treading a new path in her maiden venture Thiru Thiru Thuru Thuru. When action-packed flicks are the order of the day, Nandhini deserves a pat for experimenting with a hilarious entertainer.

The movie has been shot in digital format, giving enough scope for Nandhini to try adding innovative colours and tones on screen.

The story revolves around four main characters. Srinivasan (Mouli) runs an advertising agency. His employees - Arjun (Ajmal) and Archana (Rupa Manjeri) - slog for the company. The couple with contrasting characters comes together for an assignment and choose a baby to appear for one of their advertisements.

But the turn of events land them trouble, as the baby happens to be a kidnapped one. They now run from pillar to post to hand over the baby to its parents and also obtain a no-objection certificate from them for the baby to feature in their ad campaign.

With Mouli taking centre stage, Nandhini seems to have won the battle even before she commenced the film. The actor and writer, who impressed everyone with a neat portrayal in Poi Solla Porom, carries his good form here too. Cool and casual in his dialogue delivery, it seems to be a tailor-made role for Mouli and he has slipped into it really well.

Nadhini promises a lot as soon as the movie begins and she sustains the momentum right through the fare. But the movie fails to impress as a whole, as the script looks like a package of jokes and comical sequences rather than a coherent story.

Ajmal, who donned a serious role in Anjathae and TN 09 AL 4777, plays a different role this time. As an irresponsible youth, who gets stuck in problems, he has performed well. Newcomer Rupa Manjeri, as his colleague who strives for perfection in all her acts, has also done justice to her role. But it is Mouli who walks away with the applause.

Music composer Mani Sharma, who is otherwise known for racy beats, has come with some soft melodies. But too many dialogues, with most characters speaking lengthy ones at places, takes away the attention.

Sathyam Cinemas and Real Image deserves pat for producing a simple movie sans violence. The movie lacks intensity and coherence but it provides some fun.