ANT-MAN AND THE WASP

Ant-Man and the Wasp 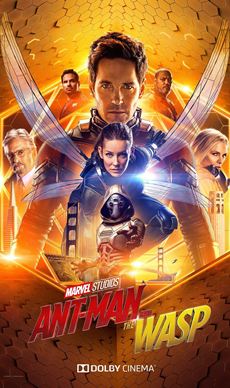 Ant-Man and the Wasp Review

The Marvel Cinematic Universe (MCU) has a unique charm as it is packed with magical fantasia and logic of its own.

Following "Avengers: Infinity War", which released this April, "The Ant Man and the Wasp" is the 20th film of this Universe and despite having a simple plot that drives a superficially complex and convoluted story, the film is equally engaging and entertaining.

Yes, this film is a sequel to "The Ant Man", which released in 2015. And adhering to the original, the argument in the plot goes into quantum spaces. "The Quantum" dominates in the argument: it is the driving force of this tale, which tries to tie in together the different aspects of the Ant-Man's Universe, but achieves nothing.

The narrative begins with the character of Scott Lang (Paul Rudd) being house-arrested for joining Captain America in a skirmish between the Avengers in Germany, which is derived from a plot of another film. These intertextual references between different films works for fans of superhero films, who are usually the uncritical audience. But when these references repeat too often, it annoys.

Nevertheless, despite the imprisonment of Scott Lang, the plot propels with the arrival of Hank Pym (Michael Douglas), the scientist who discovered the shrinking formula and his daughter Hope (Evangeline Lilly), who is introduced as a superhero The Wasp. She has characteristics similar to Mr. Ant.

Of course, there is romance between the two of them as Scott and Hope and not as Hymenoptera heroes. It is the part of the mentioned simplicity of the plot.

As the narrative progresses, you realise that the fate of the entire planet is not at stake and the crux of the film at its core is family union. And, it gives you in double dose; Hank and Hope with Janet and Lang himself with his daughter Cassie (Abby Ryder Forston) who leaves his house to adorn the Ant-Man uniform and risked being sentenced to 20 years in prison.

The Ant-Man and the Wasp unite to fight two antagonists who are pursuing the secret formula designed by Pym that helps in size reduction. Why? That is not revealed clearly and is one of the reasons why the tale seems phoney.

Also, what makes this film limp are the weak antagonists. The mobster Sonny Burch (Walton Goggins) is pursuing Pym's technology to sell on the black market and Ava (Hanna John Kamen) is the resentful spirit who integrates and disintegrates at will. They fail to make an impact as villains.

The cast, continuing from the original, has Michael Pena as Luis, Lang's former cellmate and now a member of his X-Con Security crew, Bobby Cannavale as Jim Paxton, the Police Officer who keeps tabs on Lang and Judy Greer as Lang's ex-wife Maggie, have less opportunity than what they had in the first edition.

On the visual front, the film is technically spot-on. The action sequences are well-captured and the frames oscillate from the real to the enlarged and shrunken images adroitly. The computer generated images mesh well with the motion capture frames and the 3D effects and background scores are add-ons that elevate the viewing experience created by the razor sharp, flawless edits.

Overall, while this film engages you, it is the final credit teaser that will keep fans of MCU hooked to the very end, for the secret of the next episode.