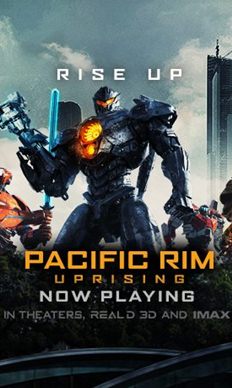 
Just like its previous edition which was released in 2013, "Pacific Rim Uprising" is another monster versus robot mayhem and it is a big let-down.

With the earlier edition set in 2020, the narrative of this one takes place a decade later, after the first battle, between the Kaijus and the Jaegers.

The Kaijus as explained in the previous edition are gigantic monsters who surface from the core of the Earth and the Jaegers are the giant human-operated robots built to defeat them.

Though life on Earth was pretty peaceful, now with four Jaegers - Guardian Bravo, Titan Redeemer, Saber Athena and Gipsy Avenger - tasked with protecting the planet from alien Kaijus, a rogue Jaeger appears in Australia just as a decision is taken by the Pan Pacific Defence Corps to replace the pilot-bearing Jaegers with remote controlled drones.

The old Jaegers are called back into action to subdue the rogue, but at the same time the Kaiju's reappear, creating mayhem on a larger scale.

Within this larger context, the plot focuses on Jake Pentecost (John Boyega), the son of Stacker (played by Idris Elba in the previous film), one of the heroes in the first war. Jake is a disgraced Jaeger ranger who has turned criminal.

He makes a meagre living by stealing Kaiju technology and selling it to the highest bidder. This brings him into contact with a spunky orphan and amateur Jaeger builder named Amara (Cailee Spaeny).

After an encounter with a larger robot, the two of them are taken into custody by the authorities. But instead of sending them to prison, they are sent to a training camp where Jake reluctantly joins the pilot force again and Amara is trained to be a cadet. Of course there are other cadets too at the training camp and yes, they will eventually pilot one of the Jaegers.

Here Jake meets Nate (Scott Eastwood), the rugged ranger with whom he had a spat earlier. Nate urges him to recapture his old sense of duty and Jake meekly obliges.

Naturally at the academy, they all become comrades again as the battle starts. Amara, who at one point, is expelled for insubordination is recalled to service and ultimately proves central to victory.

But that is not all. There is a serious issue about that rogue Jaeger and the new breaches for the Kaijus to come through. They suggest that there is a human traitor assisting the enemy. Who could it be?

Liwen Shao (Jing Tian), the imperious head of the Shao Corporation who is implementing the drone programme, Dr. Newton (Charlie Day) the right-hand man of Liwen Shao, Jake's half-sister Mako Mori (Rinko Kikuchi) a stalwart of the defence force, the pretty pilot (Adria Arjona) who both Jake and Nate look at longingly, Hermann Gottlieb (Burn Gorman) the chief PPDF scientist and a genius with innovations, and the list of suspects continues.

Eventually, the friends show up, which prompts a series of fights in a major metropolis that leaves nothing but senseless, weightless and airless digital destruction in its wake. The fate of the world is at stake and yet there is nothing serious.

The entire proceedings -- double-crossings, red-herrings, and corporate shenanigans -- all seem meaningless and lacklustre. The plot lacks dramatic build-up and tension especially towards the inevitable clash which takes place at Mount Fuji.

On the performance front, every actor is charming and they deliver earnestly.

On the technical side, the action sequences are well-choreographed and brilliantly captured.

The live action frames by Dan Mindel's cinematography merge seamlessly with the fantastic special effects. The battle scenes are fierce and violent but ultimately very generic. The background score by Lorne Balfe is ear-deafening and the editing, by Zach Staenberg, Dylan Highsmith and Josh Schaeffer, is razor sharp and crisp.

Overall, "Pacific Rim Uprising" is plodding, but the post-credit trailer promises to be back with future instalments soon.

The globe-spanning conflict between otherworldly monsters of mass destruction and the human-piloted super-machines built to vanquish them was only a prelude to the all-out assault on humanity in Pacific Rim Uprising.

John Boyega (Star Wars: The Force Awakens) stars as the rebellious Jake Pentecost, a once-promising Jaeger pilot whose legendary father gave his life to secure humanity’s victory against the monstrous “Kaiju.” Jake has since abandoned his training only to become caught up in a criminal underworld. But when an even more unstoppable threat is unleashed to tear through our cities and bring the world to its knees, he is given one last chance to live up to his father’s legacy by his estranged sister, Mako Mori (Rinko Kikuchi)-who is leading a brave new generation of pilots that have grown up in the shadow of war. As they seek justice for the fallen, their only hope is to unite together in a global uprising against the forces of extinction.

Jake is joined by gifted rival pilot Lambert (The Fate of the Furious’ Scott Eastwood) and 15-year-old Jaeger hacker Amara (newcomer Cailee Spaeny), as the heroes of the PPDC become the only family he has left. Rising up to become the most powerful defense force to ever walk the earth, they will set course for a spectacular all-new adventure on a towering scale. 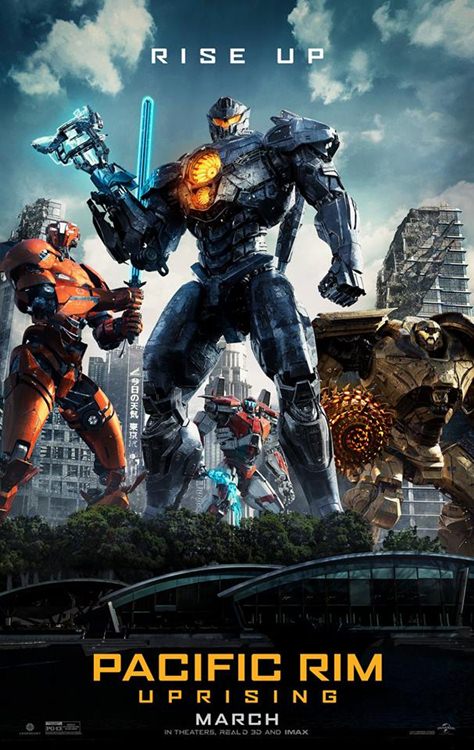