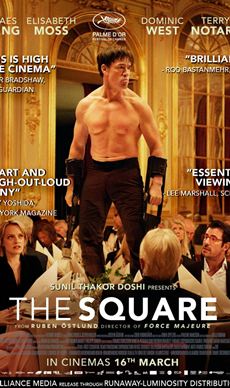 
Director Ruben Ostlund's "The Square" won the prestigious Palme d'Ore award at the Cannes Film Festival last year and is a force to reckon with especially for its social commentary on the conflicting status of social class, power, fear and the behavioural reactions to each of these.

It is an atypical, funny and amusing art house film about an art house, specifically a pretentious Stockholm museum devoted to progressive modern art. It is a satire.

The gallery, a cold lonely place, full of large open spaces, white walls and quiet staff marginalised on the edges of the rooms, displays isolated installations where patrons try to find meaning in them.

The flow of the narrative is contradictory. It is linear and coherent, but also feels spontaneous and unpredictable with exaggerated humour, cynicism and briefly violent.

The plot lined up with several real-life incidents is sometimes mounted in lush cinematic saga that makes the heavy or awkward points about all sorts of uncomfortable and pressing contemporary topics amusing. In fact, though on-the-face, the audience is forced to find meaning in the scenes, just like how one does in abstract paintings.

Ostlund, though artistic in his approach, has used abstruse motifs, characters, jokes and cultural criticism. He unravels his oeuvre through the perspective of a sophisticated, highly educated and instinctively liberal art museum curator, Christian (Claes Bang), who during an interview with Anne (Elisabeth Moss) - an American journalist, finds it difficult to explain his major cutting edge artistic project.

The project has a square outlined in an open area and a message that reads: "The Square is a sanctuary of trust and caring. Within it we all share equal rights and obligations." - The square represents a political and ethical construct rather than simply a physical space.

It represents people's sheltered nature as they hide from realities outside their comfort zones and social classes.

The actual narrative kicks off after a bizarre public incident in which Christian admirably protects a hysterical woman from being thrashed by an angry man.

After the incident, he finds that his wallet and phone are stolen, which leads him to believe that the culprits live in a dodgy part of town.

So, with the help of his colleague Michael (Christopher Laesso) he tries tracing his stuff, which prompts him to send a moralistic letter to all the residents in the area. The outcome of the exercise is the crux of the narrative.

On a separate note we see him battling with personal issues with Anne and his daughters and on the professional front a charity dinner and a distasteful marketing campaign going awry.

Every scene though ambiguous and imperfect is predominantly stretched to emphasise. The first two acts meander haphazardly and the final act seems to be wrapped up in a hurry, making the film seem a bit abrupt.

However, the tonal shifts from comedic to fearful show how an unfamiliar social situation or environment affects our emotions.

The performances of every actor are effortless and natural. In keeping with the theme of the film, how the characters switch from Swedish to English also typifies their moving from their comfort zones.

The camera work, sound designs and production designs work towards a potent and stylishly disturbing film which is more of a creative fantasy. Overall, the film may appeal only to a few.

Look, I enjoy deviant cinema as much as any cerebral critic who goes to the movies for some serious mental manipulation.

But "The Square" left me aggravated and exasperated beyond the norms of cinematic exploration. It is just not fair to weigh down a film with so many disembodied episodes that look like segments of students' short-films at a film-appreciation class mentored by a professor who thinks avant-garde-ism is the best way to place rationale in a recline.

"The Square" is an exercise in intellectual nihilism. It aims to show the passionate proximity between art and pretence and it slowly becomes a casualty of the very malaise that it sets out to expose in the world of high-art represented by the cloistered stuck-up world of the museum.

A sequence showing privileged museum guests being shouted at by the host for rushing towards the food tables jostles for absurdity with a scholar-audience interactive session where an intruder suffering from Tourette's Syndrome keeps interrupting with profanities.

Don't laugh. Because the narrative seeks out the grand absurdity in art conventions , and then invites us to not be judgemental about the grand design that destiny often scoops up into our lives in unexpected ways.

But this film tries your patience.There is no way one can allow the disembodied images of arthouse artifice to merge with the museum curator Christian's after-hours adventures which includes a tumble in the hay with an American journalist (while a baby ape sits patiently in the next room) who first pulls him up during an interview for making pretentious comments on the nature of Art and mankind's struggle to yoke works of art with the rhythms of daily existence.

The journalist then rebukes Christian for forgetting her name the morning after the feisty love-making. Her preposterous bullying is no different from what this Swedish film's director expects from us the audience.

The American journalist's love-making sequence with Christiano has a twisted ironic subtext (as does nearly every sequence in this haphazardly written dialectic on the polemic of artistic pretension) when she wants to preserve the condom with Christian's semen after their lovemaking.

What does she want do with it? I have no clue. This is a work of arrested art and rapid promotional developments, that had me wondering about its raison d'etre most of the way.Why did director Ruben Ostlund squander so much precious time on creating a world so devoid of continuity and flow? It's like watching a free-flowing trapeze artiste who has forgotten to buffer his fall on the ground.

By the time Teri Notary (filled with bestial hormonal anxiety) arrives at an elitist sit-down dinner playing the human ape to create havoc among the guests, I was done with looking for a centre to the plot.

There is none. Unless you would like to see a central stream in the theme of creating chaos in the universe of the creative, and looking for artifice in art and then satirizing it with a savagery that is at once brutal, startling and ridiculous.

"Creating chaos" is a major theme in "The Square". Christian does so by sending personal threatening letters to people whom he suspects of stealing his cellphone and wallet. Eventually the payoff catches up with him in ways that are as aggressively circumvent as a roller coaster ride that derails midway .

Yes, "The Square" is a film brimmimg with provocative ideas and audacious images. But they all add up finally to creating a cosmos that is as loosely constructed as an interstellar missile poised for takeoff into a galaxy that doesn't really exist outside the creator's head.

You are very likely to come away from this experience embittered and swearing to stay away from everything Swedish except the music of ABBA all your life.

Christian is the successful curator of a modern art museum – he lives in the epicenter of the art community and takes his work very seriously. A few days before the opening of the prestigious exhibition The Square he is mugged, which he can neither shake off or let pass unnoticed. Christian embarks on a hunt for the perpetrator and ends up in situations that turn steadily more amusing, and make him question his own moral compass. Simultaneously he has to deal with the PR agency the museum hired to help market the upcoming exhibition. Something which takes an unexpected turn and plunges both the curator and the museum into crisis.