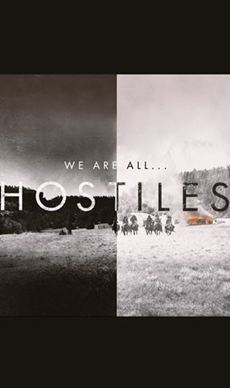 Outwardly, like most films of the 'Western' genre, "Hostiles" is a celebration of savagery. It opens with a disturbingly graphic sequence of Rosalie's (Rosemund Pike) entire family, including three little children, being massacred by American-Indians.

However, it ends rather unexpectedly with the same distraught widow leaving the site of savagery with the only surviving member of an American-Indian family.

In that union of two survivors of a mutual massacre there resides a deeply moving statement on what violence has done to civilisation from the time Man invented the Gun and even before that when swords and knives served the purpose of violence.

"Hostiles" shows why hostility is not a desirable state of existence.

This is done in the narrative through some virile scenes of violence that end in a sense of guilt-stricken waste. We are sickened not so much by savagery as the sense of wastage and nullity it leaves behind.

At its heart this is also a melancholic meditation on loneliness and love. It is in the eyes of the very amazing Christian Bale.

Bale plays Captain Joseph Blocker, a veteran soldier of the American Army at the end of the 19th century, who is given the unpleasant journey of escorting a dying American-Indian chief (played with marvellous tranquility by Wes Studi) and his family back to his usurped land.

The screenplay, brilliantly opaque and yet prismatic, thus becomes a meditation of lineage, cultural assimilation and anti-violence.

There are many patches of excruciating lucidity in the narrative where we get an impression of how exhausting and frustrating a life of violence can be for a civilization hell-bent on domination.

The film is a sum total of many conflicting emotions. As it stresses on the violence that streaks across the rugged landscape, it also seems to recoil from that climate of brutality and barbarism into which the characters of both the native American population and the white-skinned Americans have been thrown.

Neither side wants this savagery. Not in the way the plot pitches them as comrades in grief. The villains, in typical Bollywood style, are the irredeemable savages who enjoy hurting and killing.

In this way the narrative sharply deflects the onus of the violence away from the film's pivotal characters who are pitched against one another.

Presiding over this deeply contemplative study of history's most unfortunate throwbacks, "Hostiles" gathers its strength from Scott Cooper's sturdy screenplay, Masanobu Takayanagi's supremely evocative cinematography which sweeps across the arid landscape searching for alcoves of solace.

Most of all this film derives its strength from its central performance. Christian Bale as the lonely desolate conflicted Captain makes us believe in the healing power of compassion without ever trying to make morality seem like a manipulative machine.

Bale makes every other actor(barring the stately grief-stricken yet dignified Rosemund Pike) pale in comparison. Timothy Chalamet garnering global wah-wahs for "Call Me By Your Name", appears for a fleeting period, hastily exiting so that the decks are cleared for the mature men to have their say about what it means to be caught in a crossfire of brutality while the soul pines for just a warm embrace.

This is a film that left me in a ruminative after-shock. How can any film so violent be so gentle and calming?

Mounted like a ponderous western film, director Scott Cooper's "Hostiles" is a slow-paced, melancholic, redemption tale that offers us a brutal slice of American history.

Based on a story by Donald E. Stewart, set in 1892, it is a hero's journey. A reluctant Captain Joseph Blocker, a US Cavalry officer is tasked to escort an ailing Cheyenne Chieftain and his family back to their home so that the chief may pass away "peacefully" on his native soil.

With deep-seated hatred stemming from decades of violence and a recent encounter with the chief, the captain considers him to be a rival. Hence, the chief and his family are treated like prisoners.

While making the harrowing and perilous journey from Fort Berringer, an isolated army outpost in New Mexico to the grasslands of Montana, the group comes across a young widow (Rosamund Pike), a sole survivor of a brutal attack where her entire family was wiped out. With no choice but to take her along, she joins the group on their ill-fated expedition which is attacked by Apaches, fur traders, criminals and landowners.

While the film accurately portrays the period and the dynamics that existed during that time, the film lacks a soul.

The tale is sterile or synthetic, despite appearing to be reverent and introspective. It speaks about a man's place in the world, his connection with nature and the land he lives in and especially about the original natives by intruders.

There are too many moments where characters reach out to remind us of the premise. Also, the gruesome action, the atrocities and survival instincts, though predictable are subtle, crisp and matter-of-fact, thus making the emotional moments in the narrative too perfunctory.

Similarly, the performances too, though sensitively portrayed by the ace cast lacks the chutzpah and the fault lies in the script as the plot trudges on a sluggish, one-dimensional path.

Nevertheless, Christain Bale excels in internalising his emotions. He delivers a sympathetic performance, almost far too insular as a man speaking with his looks. You can feel the weight of his soul over the course of his journey.

Rosamund Pike is remarkable as the catatonic widow who naturally becomes hysterical at the sight of more Indians. Wes Studi as Chief Yellow Hawk is wasted and so is Adam Beach as his son Black Hawk.

On the technical front, the film more than makes up with the atmosphere. Cinematographer Masanobu Takayanagi's camera work is marvellous. With his wide-angled lenses he astutely captures the landscape which include the sets made by production designer Donald Graham Burt. And the viewing experience is accentuated by Composer Max Richter's rich music.

Overall, Hostiles albeit being bland and unexciting is a well-executed, straightforward film, lost in its own expansive landscape.

Written and directed by Scott Cooper, Hostiles takes place in 1892 and tells the story of an Army Captain (Christian Bale) who reluctantly agrees to escort a dying Cheyenne chief (Wes Studi) and his family back to tribal lands. On the journey, they meet a widow (Rosamund Pike) whose family was murdered on the plains and offer their help. As the former rivals make their way from an isolated Army outpost in New Mexico to the grasslands of Montana, their relationship moves from antagonism to compassion, demonstrating humans’ capacity for change. The ensemble cast also includes Ben Foster, Timothee Chalamet, Jesse Plemons, Q’orianka Kilcher, Rory Cochrane and Adam Beach.