THE STRANGERS: PREY AT NIGHT

The Strangers: Prey at Night 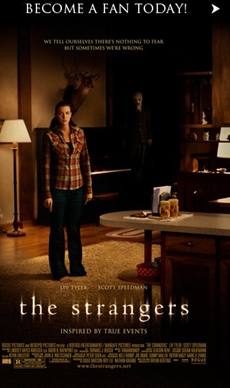 The Strangers: Prey at Night Review


Director Johannes Roberts' 'The Strangers: Prey At Night' is a slow but chilling, horror thriller, inspired from Director Bryan Bertino's 2008-released film of the same genre called - 'The Strangers'.

Flat and rudimentary in its approach, it is a battle of survival after being hunted by three psychopaths in a desolate trailer park.

The story is just an excuse to set the plot in motion. Teenager Kensey (Bailee Madison) is supposed to join a boarding school soon, so her parents Mike (Martin Henderson) and mother Cindy (Christina Hendricks) plan a weekend trip to a trailer park run by their relative. Uncle Martins. They drag their son Luke (Lewis Pullman) along to accompany his sister during the weekend trip.

There is tension in the family as Kensey resents her parent's decision of sending her to the boarding school. Nevertheless, Luke's presence offsets the tension.

The family arrives at the trailer park late in the evening and find it strangely deserted. And while they settle in their trailer, a stranger knocks on the door. Cindy opens the door and she asks, "Is Tamara home?"

And after Cindy tells her that she has knocked the wrong door, the stranger mysteriously wanders off.

Meanwhile, after some disagreement on some non-specific issue, Kensey walks out of their trailer. Luke follows to cajole her. And while they are bonding in the deserted environment, there is a knock again on the door. Thinking it is their children, Mike opens the door but instead it is the same stranger. She repeats her question. Cindy who overhears the conversation finds this bizarre. She senses something is amiss, so she cajoles Mike to accompany her to bring back their kids who are out in the park.

On the other hand, the kids stumble into an open, abandoned trailer and discover a dead body. They immediately rush back to their parents.

This sets the ball rolling for an atmospheric filled, slow but tense horror drama, when all hell breaks loose and the family members find themselves attacked by masked strangers.

The writing is simply blasé. With no much ado about character development, the plot propels like a slasher film -- with no rational motive or any supernatural characteristics or scruples among the slayers as they goes straight into the attack of the victims. The senseless attack, though exasperating due to lack of logic, whips up a frenzy among the audience, especially during the climax.

The performances of every character are perfunctory.

On the technical front - Visually the setting and the framing of the shots with its light and shadow effects and the apt sound design, elevate the viewing experience.

At the end, the film does manage to keep you at the edge of your seat as you empathise with the plight of the victims.

The Strangers: Prey at Night Synopsis

A family’s road trip takes a dangerous turn when they arrive at a secluded mobile home park to stay with some relatives and find it mysteriously deserted. Under the cover of darkness, three masked psychopaths pay them a visit to test the family’s every limit as they struggle to survive. Johannes Roberts directs this horror film inspired by the 2008 smash hit THE STRANGERS.

The Strangers: Prey at Night trailer