JUMANJI: WELCOME TO THE JUNGLE (3D)

Jumanji: Welcome to the Jungle (3D) 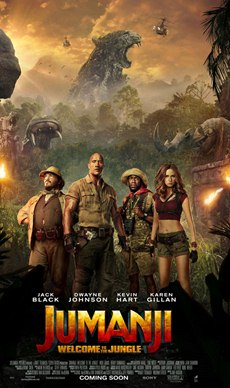 There is something appealing about "Jumanji: Welcome to the Jungle". At first glance, the film opens on a lazily designed dull note with coming-of-age humour and high school age actors. But then it penetrates into the video game Jumanji world and the film graduates to an exciting thriller, with body-swap adventure.

Based on characters from Chris Van Allsburg's 1981 children's book "Jumanji", the film "Jumanji: Welcome to the Jungle" is a sequel to Joe Johnston's 1995 adaptation starring Robin Williams. But 22 years later, the sequel which has no connection to the original, reimagines the book's magic-board-game with the smugness of the era of video games.

The narrative begins in 1996 in Brantford where a lone teenager finds the board game on the beach and when he is in the confines of his bedroom, he plays the game and is immediately sucked into the game.

Twenty years later in the same neighbourhood, four students of Brantford High School are placed in detention together; the nerdy Spencer Gilpin (Alex Wolff) along with his friend Anthony "Fridge" Johnson (Ser'Darius Blain) who is a football player for fudging their class assignments, the narcissist Bethany Walker (Madison Iseman) and the introvert Martha (Morgan Turner) for disrespecting their respective teachers during class.

The four are assigned to clean the school's basement as punishment for their transgressions. During the clean-up, they stumble upon a five-player Jumanji action-adventure console game. Soon, they find themselves teleported into the jungle as avatars they chose as characters from the video game.

With drastically opposite characteristics, they acclaim, "We are in different people's bodies."

Just like in the video-games, each avatar is bestowed with special skills and weaknesses and are loaded with three lives. If they lose all three, they actually die.

The mission tasked to the four players by Nigel, the non-player character, is to find the jewelled eye of the Jaguar, which is now stolen by the big-game hunter Van Pelt (Bobby Cannavale) and restore it to the giant statue's eye socket.

The plot is structured lamely like the game's mission in reality and every stage for the participant's quest seems like it would make for a pretty easy-to-beat video game. The action suffices in big-screen terms.

Despite being predictable, what makes the film attractive are the action-packed sequences, childlike innocent approach to the characters and their offbeat musings which are fairly hilarious. It is amusing to watch the ace actors with dynamic characteristics pretend to be ordinary kids. Their performances are obviously charming and spectacular.

There are life and redemption lessons thrown in equal measure.

Overall, with the production quality befitting the ticket value, the film will appeal to children and adults alike.

In the brand new adventure Jumanji: Welcome to the Jungle, the tables are turned as four teenagers in detention are sucked into the world of Jumanji. When they discover an old video game console with a game they’ve never heard of, they are immediately thrust into the game’s jungle setting, into the bodies of their avatars, played by Dwayne Johnson, Jack Black, Kevin Hart, and Karen Gillan. What they discover is that you don’t just play Jumanji –Jumanji plays you. They’ll have to go on the most dangerous adventure of their lives, or they’ll be stuck in the game forever…