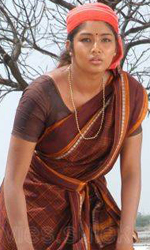 Too much salt, little sugar. The film can`t be more predictable than this.

A husband deciding to take revenge on those behind the death of his wife forms the crux of "Eesa". The only difference between "Eesa" and other revenge dramas is that debutant director Bala Ganesha has chosen to make the movie in the backdrop of salt pans of Tuticorin.

Ganesha has teamed up with Vignesh, who has yet to taste big success. Despite featuring in more than 30 films, the actor is still waiting for a big hit. In a bid to hit the bull`s eye with his performance, Vignesh gives his best shot as the male protagonist in "Eesa".

Unfortunately the film is loaded with such violence and gore that it will make audiences squirm in their seats. The first half-hour of the movie is filled with blood and so is the climax.

What deserves a special mention is Vignesh`s determination to get his act right, but his efforts are marred by the weak story and screenplay.

The film is about a young man Sudaleeswaran (Vignesh) who is on a revenge spree after his wife is killed. He kidnaps a couple of salt pan owners in a remote village in Tuticorin aned bumps them off in his hut.

The villagers send a search party to trace the killer. It is revealed that Sudaleeswaran lives in a world of his own and believes his wife Selvi (Lakshana), who was killed by salt pan owners a few months back, is still alive. He keeps her body in his hut and kills the murderers.

The climax is about how Sudaleeswaran kills Thanga Malai Annachi (Tutiorin Rajendran), the man behind all evils in the village.

The narrative is full of scenes that audiences would have seen many times, but Bala Ganesha tries to pep it up with fast narration. The director could have downplayed the violence especially those towards the climax.

The movie is cliched and far from convincing.

Actor-composer-director Aadi, who struck gold with his latest Tamil directorial debut "Meesaya Murukku", says he would like to spread positivity and instill confidence in the younger generation through his future projects.Read More