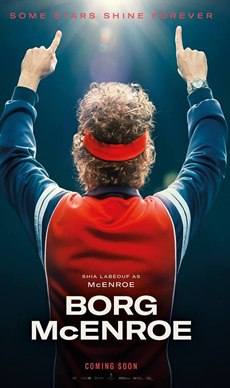 A sports drama, director Janus Metz's film "Borg McEnroe" is the story of two legendary tennis players with diametrically opposite personalities, one stoic and the other effervescent.

Narrated like a documentary in a non-linear manner, the film follows the Swedish Bjorn Borg (Sverrir Gudnason) and American John McEnroe (Shia LaBeouf). Reflecting the players' anxieties and insecurities, it reveals the contraposition of their methods of playing tennis and moving through life and courts.

Borg was cold, a machine, a base player. He was like an automaton and was briefed to concentrate on "one point at a time", whereas McEnroe was an unpredictable, aggressive strategist who fought with everyone.

As the film inevitably dramatizes their first historical face-off at the 1980 Wimbledon Men's Singles Final, it tells us about their past and how they may or may not be able to cope with losing the title match in the coming days. In the process, it reveals how events in their lives have shaped into creating their respective temperaments. It also talks about their ambition and sacrifices and moreover reveals that the "former rivals were best enemies and were now friends".

The screenplay by writer Ronnie Sandahl and director Janus Metz is simple and taut. It has the right amount of levity before getting too serious, and then letting loose throughout the tense tennis match sequences as well.

While the narrative focusses a lot on the players and their personalities, it does not give us much insight into their family lives and it appears that the focus is more on Bjorn than on John.

The repetitive flashbacks make the film slightly boring at times. But the film at 107 minutes manages to hold your interest simply because of the performances.

Gudnason and LaBeouf give terrific performances. Sverrir is apparently a distant cousin of the player. He not only looks just like Bjorn Borg, but his committed performance really takes his character over the edge.

LaBeouf, despite his limitations, definitely holds his own as well. He emulates McEnroe's eccentric character with precision.

Though the other characters play a significant part in the lives of the players, they are just sidelined. Prominent among them are; Tuva Novotny as Borg's fiancee Mariana Simionescu, Stellan Skarsgard as Borg's mentor and manager Lennart "Labbe" Bergelin, Ian Blackman as John's father McEnroe Sr.

Overall, with moderate production values, and decent camera work the film encapsulates the players and their glorious moments.

It is a treat for those who had watched the live matches on television as it revives memories, and apart from that, the film has enough elements to appeal to even neophytes of the sport.

The best of intentions and impeccable casting do not compensate for a lack of vitality in this well-mounted, but finally unfulfilling true-life saga about the legendary rivalry on the field between the two tennis legends.

Director Janus Metz has cast well. Shia LaBeouf was born to play John McEnroe. He is everything that McEnroe should be -- impetuous, hot-headed, impatient on the field and an enfant terrible, quite tangibly 'Tennis, the Menace' -- and then some more. Very often, the distance between the actor and the role blurs here.

I don't know if that's a good thing in a biopic that purports to open two lives that played each other out in full public view.

It's the Swedish actor Sverrir Gudanson as Bjorn Borg who really pins down the plot, and gives the film a bearing of intimidating intimacy. Because of Gudanson's performance, many times I felt I was getting close to knowing the real Bjorn (whom I don't know at all in any capacity), his frightening self-discipline and superstitious nature bordering on a psychotic attachment to order and neatness.

But then the narrative pulls back.

Sad to say we are never allowed to know either of the two tennis players beyond what is already in the public domain. Bjorn's fits of ill temper are not for public consumption. John's are. But in the film, we don't get to know either. It's almost as if the director willed an aloofness for his two protagonists. They come to us as intensely private people forced to live acutely public lives. Which is probably what the reality was. But as cinema, it simply sucks when you can't get to know the heroes beyond their public image.

In that sense, this film is no different from the other notable sagas on the perils of stardom. What keeps us glued to the mounting tension of this sportive saga written into the raga of rivalry are the performances, not just the two protagonists, but also the distinguished Stellan Skarsgard as Bjorn's lifelong coach and Tuva Novotny as his girlfriend.

Alas, Bjorn speaks only in Swedish to the people close to him, thereby creating another level of alienation with the audience. There should have been a lot more on the two tennis legends' past. What we get are cursory scenes from their childhood and teens played out with a complete absence of warmth or tenderness.

McEnroe's father, goading his little son to show his skills at mathematical numbers in front of dinner guests, and a teenaged Bjorn raging in the forest, just make us wonder why people who excel in life are allowed to get away with asocial behaviour.

This is a story that was waiting to be told. Now that it is here, we can only approach its unapproachable protagonists with a feeling of wistful yearning. If only the two protagonists were as expressive as the actors who play them.

The tennis played by Gudanson and LaBeouf is as good as Sushant Singh Rajput's cricket in "M.S. Dhoni - The Untold Story". But you don't have to like tennis to watch this film. If you like the idea of two very accomplished actors struggling to give a relevance to their characters beyond the script, this is your movie date.

It’s the summer of 1980 and Björn Borg (Sverrir Gudnason) is the top tennis player in the world, dominating the sport both on and off the court. A powerful and rigorously disciplined player, there is only one obstacle in his pursuit of a record-breaking fifth Wimbledon championship: the highly talented but ferociously abrasive young American, John McEnroe (a perfectly cast Shia LaBeouf). With three days until the tournament begins, Borg trains religiously in his lavish Monaco home, aided by his coach and mentor Lennart (Stellan Skarsgård) and girlfriend Mariana (Tuva Novotny). But McEnroe's explosive confidence and wrecking-ball persona continue to infiltrate Borg's ice-cool and normally unshakable temperament. With each man the antithesis of the other, both players delve into their formative memories as the climactic tournament draws near and anticipation reaches fever pitch. Visceral and breathlessly tense, the match itself - regarded as one of the greatest of all time - would mark the pinnacle of the ‘Fire and Ice’ rivalry between Borg and McEnroe; an exhilarating battle of personalities that set the world of tennis alight.