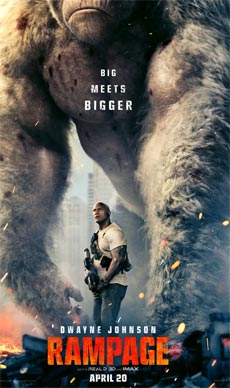 The title says it all…

This latest offering from Director Brad Peyton who had earlier given us "San Andreas", goes headlong in destroying, not only "the world" in its cinematic universe which ironically is the city of Chicago, but also the senses of the audience.

Loosely based on the classic arcade game of the late 1980s where players control giant animal monsters levelling a city for the sheer joy of it, the film lacks the immersive thrill as it is no fun being a mere spectator. It is also a modern take on King Kong and Godzilla, where instead of one giant animal we have three enormous mutant creatures doing the needful.

The narrative begins with the malfunctioning of a satellite in space after a series of lab-rat experiments conducted aboard go horribly awry. The scientist on board is evacuated only after she is forced to carry the experimental gene-mutating formula to Earth.

On Earth, at the San Diego Wild Animal Park, we are introduced to Davis Okoye a primatologist and former army special forces anti-poaching team member, who can talk to animals. He looks after the gorillas and specifically the giant albino, silver-back male named George. George communicates in sign language and has a special bond with Davis.

Meanwhile, the spacecraft carrying the scientist explodes in mid-air and the three canisters of the experimental gene-modifying gas crash land in Florida, Wyoming and San Diego, each dosing a different wild animal (a crocodile, a wolf and George).

The mysterious experimental gas turns the three animals into giant, aggressive and emotional unstable beasts. They destroy buildings, crush cars, toss tanks and bite helicopters out of the sky.

Sensing a link in the behavioural pattern of the three animals and wanting to save his friend George and to stop the other two from destroying "the world", Davis with the aid of a discredited genetic engineer named Dr. Kate Caldwell and the Marine elite force, takes it upon himself to find out who mutated the animals and why?

The plot is simple, straight forward and definitely indulges in absurdities. While the film starts off with a promise, by mid-point the film ceases to exist as the dialogues are sort of campy and lazily written and the narrative doesn't much bother with logic or reason either.

There are moments that play earnestly and you might be inclined to think that the film believes in its premise. But, despite having some suitably epic moments that deliver on a pure spectacle level, there are times driven by the CGI influenced action binge that seem ridiculously tedious as they fail to properly trick the human eye into believing.

Dwayne Johnson with rock solid charisma makes every scene of his enjoyable. He holds his own against his co-actors and matches the magnitude of the monster animals with élan. Naomie Harris as Dr. Kate Caldwell makes for an interesting sidekick.

The duo are limply supported by Jake Lacy and Malin Akerman as the brother-sister team who have nefarious reasons for wanting to make the animals real big and angry.

Joe Manganiello as Burke the leader of the mercenary group and Jeffrey Dean Morgan as Harvey Russell the Government agent, have their moments of on-screen glory.

Overall, while the film is a cautionary tale about the dangers of biological manipulation, it offers nothing exceptional that one has not seen in earlier films of the same genre.

Primatologist Davis Okoye (Johnson), a man who keeps people at a distance, shares an unshakable bond with George, the extraordinarily intelligent, silverback gorilla who has been in his care since birth. But a rogue genetic experiment gone awry mutates this gentle ape into a raging creature of enormous size. To make matters worse, it's soon discovered there are other similarly altered animals. As these newly created alpha predators tear across North America, destroying everything in their path, Okoye teams with a discredited genetic engineer to secure an antidote, fighting his way through an ever-changing battlefield, not only to halt a global catastrophe but to save the fearsome creature that was once his friend.

Peyton directs from a screenplay by Ryan Engle and Carlton Cuse & Ryan J. Condal and Adam Sztykiel, story by Ryan Engle, based on the video game Rampage.

The creative team includes production designer Barry Chusid ("San Andreas"), director of photography Jaron Presant (2nd unit, "Star Wars: The Last Jedi"), editor Jim May ("Goosebumps") and costume designer Melissa Bruning ("Dawn of the Planet of the Apes"). Music will be composed by Andrew Lockington, who created the scores for "San Andreas" and "Journey 2: The Mysterious Island."
The "Rampage" creatures are brought to life by acclaimed VFX supervisor Colin Strause ("San Andreas," "X-Men: Apocalypse"), with five-time Academy Award-winning visual effects company Weta Digital ("The Lord of the Rings" Trilogy, "Dawn of the Planet of the Apes"). 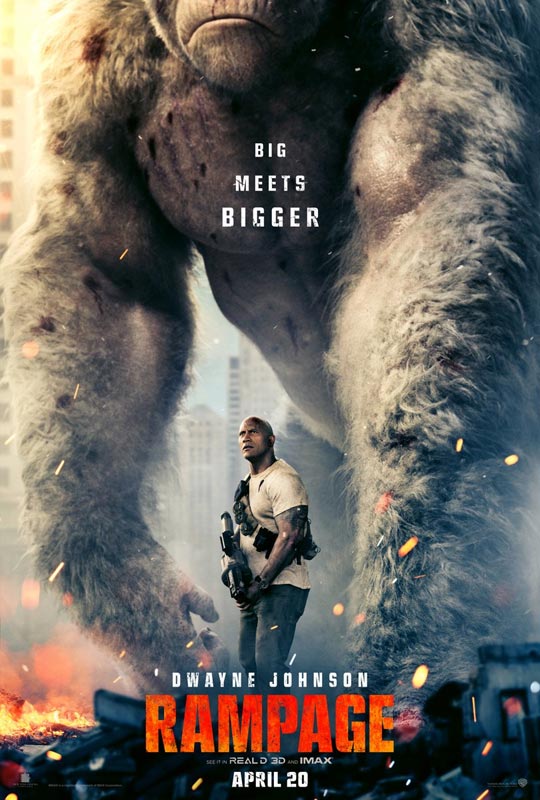