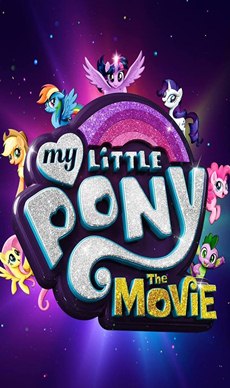 This 2D animated musical fantasy is based on the television series "My Little Pony: Friendship Is Magic" that was developed in 2010, as the relaunch of the Hashbro toy 'My Little Pony'.

Set in Equestria -- a universe packed with ponies, the ponies, led by Princess Twilight Sparkle and assisted by Princess Celestia and Princess Luna, prepare for their first Friendship Festival. The festivities are interrupted by an invasion of monstrous storm creatures commanded by the broken-horned unicorn Tempest Shadow, who hopes to have her horn restored by the evil Storm King.

The Princess Twilight along with the five pony friends -- Pinkie Pie, Rainbow Dash, Rarity, Applejack and Fluttershy -- and her assistant dragon Spike escape from Equestria. How they gather forces to destroy Storm King and resume their festivities, forms the crux of the tale.

The plot, written by screenwriters Meghan McCarthy, Rita Hsiao and Michael Vogel, is long drawn and convoluted for a children's film. But the world of "My Little Pony" has been held up as a feminist utopia, where mares run the show. The messages learnt by Princess Twilight and her huge-eyed, tail-swishing co-stars are certainly commonplace.

The voices lent by the star cast suit the characters to perfection. Tara Strong as Princess Twilight Sparkle, Ashleigh Ball as Applejack and Rainbow Dash, Tabitha St. Germain as Rarity, Andrea Libman as Pinkie Pie and Fluttershy, Emily Blunt as the evil unicorn, Taye Diggs as the smooth-talking cat and the pop star Sia as the singing pony and Live Schreiber as King Storm.

They are all pitch-perfect and they all do justice to their characters.

The animation too is near perfect, given the subject. The visuals are adequately vibrant and colourful. The frames are aptly balanced with dark shades, enough to make the candy-coloured moralising seem realistic.

The mild action is paused occasionally with a bunch of inspirational ditties that are toe-tappers. The songs and score composed by songwriter Daniel Ingram is Disney Broadway-esque. It is elevating to hear the numbers with the lyrics, "I'm the friend you need", "We got this", "Time to be awesome" and "It's time to grow up and be wise".

Overall, "My Little Pony" is intermittently cute that will engage the kids but it definitely lacks the thump to gallop you off to fantasy land.

A new dark force threatens Ponyville, and the Mane 6 – Twilight Sparkle, Applejack, Rainbow Dash, Pinkie Pie, Fluttershy, and Rarity – embark on an unforgettable journey beyond Equestria where they meet new friends and exciting challenges on a quest to use the magic of friendship to save their home. Lionsgate and Allspark Pictures present, a DHX Media production.