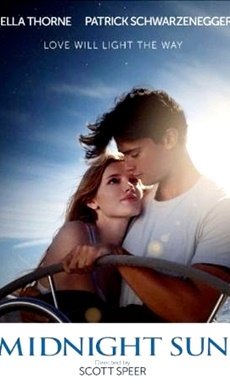 If you are a sucker for tearjerkers or simply love-thirsty, then Director Scott Speer's ‘Midnight Sun' is a film that will surely appeal to you. For others, this would be just another contrived romantic tragedy, a teen-romance between star-crossed lovers.

And here, the fault lies in their stars!

She -- Katie Price (Bella Thorne) was born with a rare skin disease called Xeroderma Pigemtosum, better known as XP, which means that she cannot be in the sun. Any exposure to sunlight could lead to her death.

Her only real company is her father (Rob Riggle) and best friend Morgan (Quinn Shephard).

Home schooled by her father, she spends her days behind tinted windows. She also writes songs, plays the guitar and sings. And while she has never been a problem before, she is a bit older now.

So, on the eve of her high school graduation and eager to explore the world a bit more, she takes her deceased mother's guitar and heads to a local train station to busk.

He -- Charlie (Patrick Schwarzenegger) although with his good looks and a perfect swimmers physique, isn't like any other popular guys in the locality. He easily gets bored at parties ever since he lost his swimming scholarship because of a shoulder injury which happened while he was drunk.

After walking out of a post-graduation party, he ambles to the local railway station and by happenstance hears Katie strumming her guitar and singing. He is smitten and is curious about her.

They have an awkward interaction, as unbeknownst to Charlie, Katie had a crush on him. She used to watch him from her window every day since she was a child.

Her best friend Morgan plays cupid. The duo meet again and a relationship blossoms. The two embark on a passionate summer romance -- in the dark -- which includes: her first party, her first live show, her first ride on the train when he takes her for a wild late-night trip to Seattle.

But then, reality strikes as Katie can't bear to tell him about her condition or why they can only meet after sunset.

Their love story written by Eric Kristen is cute and touching and feels so overtly cinematic, and yet not necessarily in an endearing way, for, the characters are flat, one-dimensional and the film ends on an emotional but anti-climax note.

On the performance front, the lead pair despite being earnest, charismatic and strikingly good-looking, lack on-screen chemistry and has nothing to do with their acting prowess but with the script.

With Katie being a singer of sorts, the songs are effectively used to propel the narrative and elevate the emotional quotient, but unfortunately they (the songs) don't have the punch or the zing to rise above mediocrity.

Overall, the film fails to impress because it seems like a genetically modified-romance which lacks the kind of emotional momentum that is needed for a good cinematic experience.

MIDNIGHT SUN is a romantic tearjerker about 17-year-old Katie Price (Bella Thorne), sheltered at home since childhood with a rare genetic condition, a life-threatening sensitivity to sunlight. Having only her father Jack (Rob Riggle) for company, Katie's world opens up after dark when she ventures outside to play her guitar. One night, her dreams come true when she’s noticed and asked out by her longtime crush Charlie (Patrick Schwarzenegger), whom she’s secretly watched from her bedroom window for years. As they embark on nightly summer excursions, Katie’s risk to sunlight grows and she’s presented with the gut-wrenching dilemma of whether she can live a normal life with her newfound soul mate.