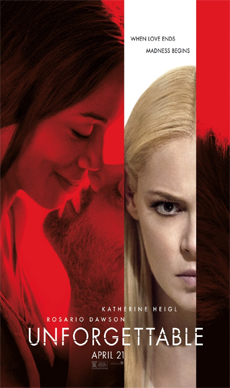 This tale is definitely not what the film's title suggests. But it definitely teaches you life-lessons. The only "unforgettable," takeaway is to have a strong password in today's digital age.

Tessa Connover is a blonde ice maiden, the perfect yet socially unaccepted wife of David, an investment banker who leaves "Wall Street only to return to his roots", in order to open a beer brewery.

Barely coping with the end of her marriage, Tessa finds it difficult to accept that her ex-husband is happily engaged to Julia Banks, an accomplished editor of a web-site.

Julia on the other hand, is a nondescript lady who is trying to settle into her new role as a wife, and stepmother to David's little daughter Lily (Isabella Rice).

She believes that she has finally found the man of her dreams who would help her put her own troubled past behind her. She is still haunted by the trauma of her previous relationship with Michael Vargas (Simon Kassianides), an aggressive bully who beat her so badly that she had to get a restraining order.

How Tessa turns Julia's dream into a horrific nightmare is the crux of the tale.

The film begins in an interesting way with Vargas being killed and the cops suspect Julia of having killed her ex. And as the tale unfurls, the script written by Christina Hodson half-heartedly teases the possibility that Julia could be guilty.

With a screenplay that is near perfect, the plot is predictable and far from gripping.

Katherine Heigl as Tessa is sincere, but limited in her acting prowess. Her steely gaze helps her portray the ice-maiden to the fullest.

Rosario Dawson, as the down to earth and vulnerable Julia, is appealing and her on-screen chemistry with Geoff Stults who essays David, is palpable.

Isabella Rice as Lily is endearing. But it is Cheryl Ladd in a minuscule role as Tessa's hypercritical mother Helen adored by her granddaughter, who seems formidable yet enchanting.

On the technical front, with moderate production values, the film is effectively captured by cinematographer Caleb Deschanel's lens. Also commendable are Editor Frederic Thoraval's fine edits that put the film in the right perspective.

Overall, "Unforgettable" may not offer an enthralling experience but nevertheless it is mildly engaging.

Katherine Heigl ('27 Dresses,' 'Knocked Up'), Rosario Dawson (the 'Sin City' films) and Geoff Stults (TV’s 'The Odd Couple'), star in the film. 'Unforgettable' marks a reunion for Heigl and Di Novi, who previously collaborated on 'Life as We Know It.'

The film is produced by Di Novi, Alison Greenspan ('If I Stay') and Ravi Mehta ('Grudge Match'), with Lynn Harris serving as executive producer. The film was written by Christina Hodson.

Heigl stars as Tessa Connover, who is barely coping with the end of her marriage when her ex-husband, David (Stults), becomes happily engaged to Julia Banks (Dawson)—not only bringing Julia into the home they once shared but also into the life of their daughter, Lilly (Isabella Rice). Trying to settle into her new role as a wife and a stepmother, Julia believes she has finally met the man of her dreams, the man who can help her put her own troubled past behind her. But Tessa’s jealousy soon takes a pathological turn until she will stop at nothing to turn Julia’s dream into her ultimate nightmare.

This film has been rated R for sexual content, violence, some language, and brief partial nudity. 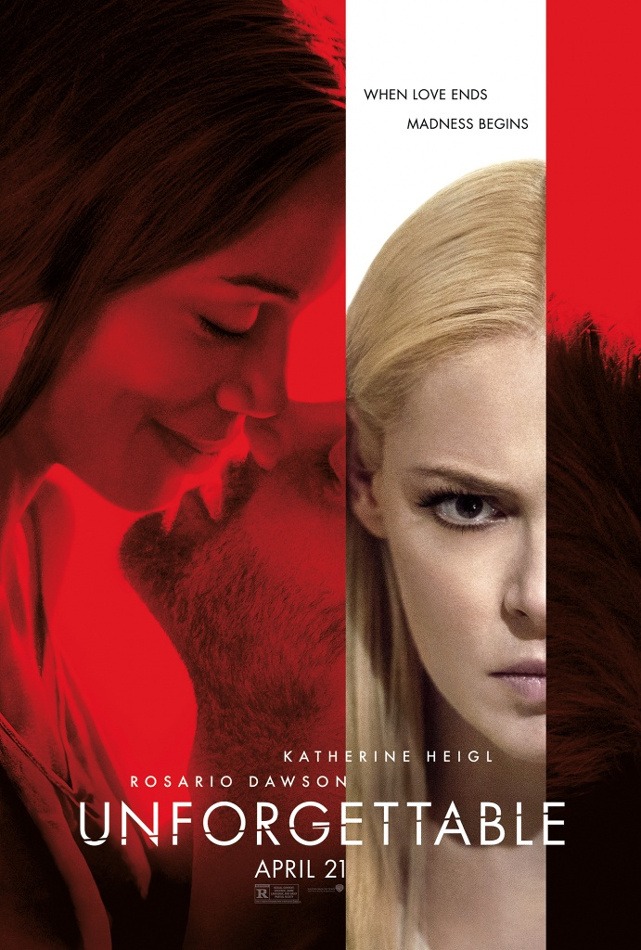