WAR FOR THE PLANET OF THE APES (3D)

War for the Planet of the Apes (3D) 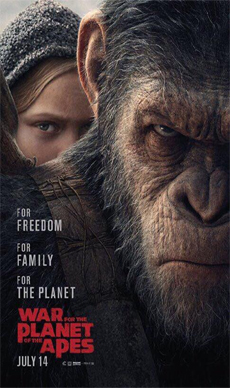 War for the Planet of the Apes (3D) Review

'War For The Planet Of The Apes': Emotionally fuelled and visually arresting (Review By Troy Ribeiro, Rating: ***1/2)

"War For The Planet of The Apes" is a visually stunning and emotionally fuelled film. This inter-species survival story, keeping with the tradition of its earlier two editions, has all the trappings of a blockbuster film and resonates with all the flavours of its predecessors.

The tale takes off two years after the events of the 2014 released "Dawn of the Planet of the Apes." After the humans were threatened by the Simian Virus they try to eliminate the apes. Caesar and his tribe now living in the forest are forced into war by the surviving humans. To make matters worse for Caesar, the followers of his once assistant, Koba have now joined the humans for revenge on Caesar.

Learning that the humans, under the leadership of a mysterious "Colonel", are planning to attack their abode soon, Caesar decides to relocate his folk across the desert. But the night before he can begin the move, his home is attacked. His wife Cornelia and eldest son Blue Eyes are killed by the Colonel but Caesar along with his youngest son Cornelius survives the attack.

Haunted by the dead Koba's disposition and seething with anger, Caesar abandons his charges, leaving Cornelius in the care of Lake, the mate of his lost son. He accompanied by Maurice, Luka and Rocket, go on the trail, hell bent to make the Colonel suffer. This forms the crux of the tale.

The writing by Mark Bomback and Matt Reeves based on characters created by Rick Jaffa and Amanda Silver, speaks about the annihilation of the species and takes inspiration from classics like Apocalypse Now, The Great Escape and Exodus, in terms of narrative and visuals. Also, with a fair blend of character traits, the film seems complexed and rounded, but then overall, you'd find that the sketches are only one-dimensional and card-board thin. They lack depth except for Caesar.

He is for one, the most interesting hero in recent times. Sympathetic, considerate and compassionate, he is the opposite of a prototype Hollywood protagonist.

Packed with ape-versus-human mayhem and sub-plots that reveal human attitudes, logic and amusement, the film is conceptually brilliant and engaging but never inspiring or provoking. Also with a familiarity of the content, and the slow pace in the second act, the narrative feels a bit stretched.

On the performance front, most of the key characters deliver beyond expectations. In fact, in a stunning motion-capture interpretation, it is Andy Serkis as the confused yet sincere Caesar who steals the show. He is aptly supported by Steve Zahn who gives us a little comic relief as "Bad Ape". Karin Konoval as the wise and benevolent Maurice and Terry Notary as Rocket, are noticeable.

Among the humans, Woody Harrelson in a poorly etched role of the antagonist Colonel, delivers an obligatory performance. Similarly, Amiah Miller as Nova the bold and kind war orphan whom Maurice adopts as his daughter is charming. The character has promise but is poorly crafted.

War for the Planet of the Apes (3D) Synopsis

In War for the Planet of the Apes, the third chapter of the critically acclaimed blockbuster franchise, Caesar and his apes are forced into a deadly conflict with an army of humans led by a ruthless Colonel. After the apes suffer unimaginable losses, Caesar wrestles with his darker instincts and begins his own mythic quest to avenge his kind. As the journey finally brings them face to face, Caesar and the Colonel are pitted against each other in an epic battle that will determine the fate of both their species and the future of the planet.

War for the Planet of the Apes (3D) Poster 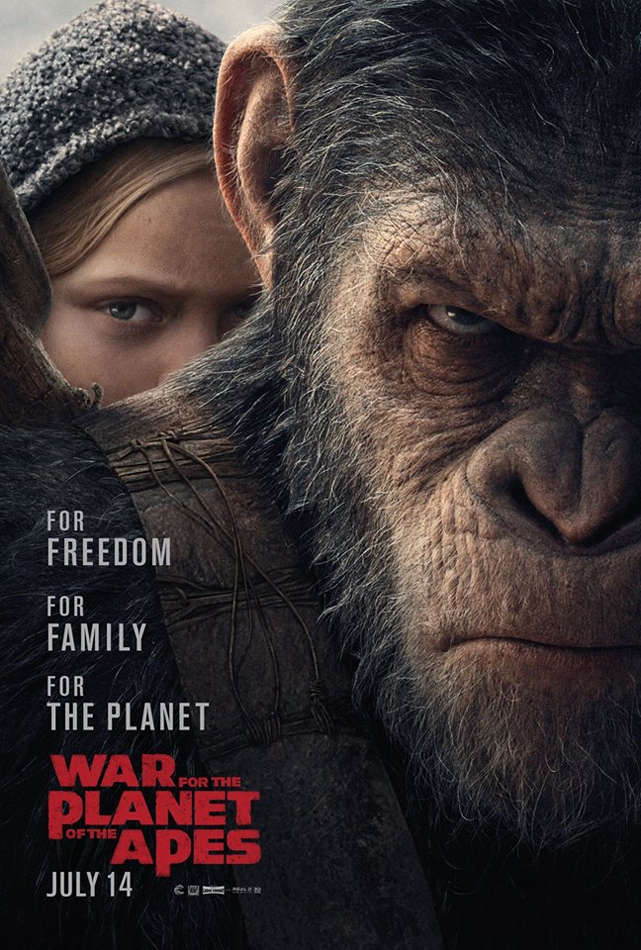 War for the Planet of the Apes (3D) trailer