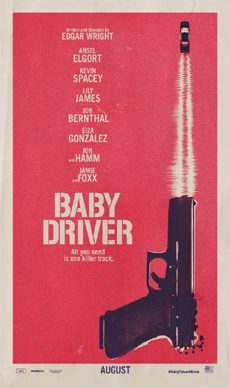 This film will surely appeal to you if you are an Ansel Elgort fan. This film is not as emotionally mushy as "The Fault in Our Stars" or action-packed as the "Divergent" series, but nevertheless it is a breezy crime-based love story with the right amount of emotional, action and music quotient.

Written and directed by Edgar Wright, the film is a lazily drafted, conventional story of a quirky getaway driver called "Baby" (Ansel Elgort) who works for a crime kingpin named Doc (Kevin Spacey).

Baby is quirky because he rarely speaks and is always listening to music. He listens to music because he has tinnitus, which causes a constant ringing or buzzing in his ears and he needs the music to drown that out.

Doc is the brain behind some of the most brazen series of daytime heists. While he never repeats his team, Baby is the only constant factor, as he considers him to be his lucky mascot. Also it is Baby's demeanour and nearly superhuman skills behind the wheel that make him a hot favourite.

But then, Baby is not pleased with this fact. In fact, he is forced into a life of crime to settle off a debt he owes Doc. Baby plans to get out of this situation as soon as possible. And then, it's not so simple for him to walk away.

With a well-etched character graph, Ansel Elgort though not too charismatic, does full justice to the title role. He is simply brilliant and appealing as the enigmatic baby-faced, reticent driver, who is only concerned with his automotive superpower. And, with equal natural ease, he transforms into a violent rebel when his conscience is pricked.

Ansel is aptly supported by Lily James as his love interest, Deborah. She emotes passionately as the sweet, ever-smiling kind-hearted waitress. Though their onscreen chemistry misses a beat or two, you patronise both of them whole heartedly.

Kevin Spacey as Doc is flat and stereotypical. He struggles to make his character seem interesting.

The others who populate the film's universe as Baby's heist-mates are; Jon Hamm as Buddy, Eiza Gonzalez as Buddy's girl-friend Darling, Jamie Foxx as the psychotic - Bats and Jon Bernthal as Griff.

The plot seems cliched with genre complications that make subtlety neither needed nor desired, but what makes the narrative stand apart is the manner in which music is intertwined into the tale.

With nearly 30 tracks which include three originals, music plays a major factor in the film as the beats of the film are completely in sync with the rhythm of the music. There are instances where Baby plans his escape based on musical cues, at one point he does not drive until the song is just at the right part. Also, during a car chase, the sounds of the gun shots fired, match to the beats of the background score.

The high octane action sequences packed with car-chases are well-orchestrated. The driving scenes are like ballets of screeching wheels and spinning vehicles. They are flawlessly and rhythmically implemented.

Overall, "Baby Driver" is an astutely handled film that makes for fun viewing.

Director Edgar Wright says he has been approached to write a sequel to his film "Baby Driver".Read More

A talented, young getaway driver, Baby, relies on the beat of his personal soundtrack to be the best in the game. When he meets the girl of his dreams, Baby sees a chance to ditch his criminal life and make a clean getaway. But after being coerced into working for a crime boss, he must face the music when a doomed heist threatens his life, love, and freedom.