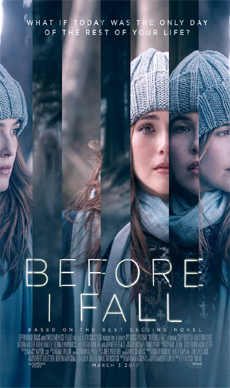 Before I Fall Review

The film is based on Lauren Oliver's young adult novel of the same name. It is not only about self discovery, but also about the way we should look at others around us.

The story takes us through a day in the life of Samantha Kingston (Zoey Deutch), a popular high school girl.

The plot begins with Sam waking up at 7 a.m. on February 12, which is also known as Cupid's Day. She spends her time with her friends Lindsay (Halston Sage), Ally (Cynthy Wu) and Elody (Medalion Rahimi) and plans to lose her virginity with her boyfriend Rob (Kian Lawley) while Kent (Logan Miller) her childhood friend has a crush on her.

In the sidelines, there are; her sister Izzy (Erica Tremblay) who bothers her at home and Juliet Sykes (Elena Kampouris), her classmate and a social outcast, whom Sam's clique regularly bullies. The day ends in car crash.

But due to some inexplicable turn of events, Sam wakes up in bed again as if that day had never happened and she is forced to live the same day over and over again, until she realizes that her fate might be tied to that of another person in danger and how she puts an end to the Sisyphean grind of eternal recurrence, forms the crux of the tale.

The screenplay, with its repetitive scenes, may initially seem boring, but by the third act the tale becomes a much deeper account. With every passing version, Sam wakes up to correct her mistakes and her mission becomes focussing on the ones around her, rather than herself.

A tale stuck in a time-loop is not a novel concept, but it does allow for what could have been an interesting character arc. The first act is a generic party film which will appeal to the teenage audience. The second act is trying, which will charm die-hard cinephiles but it is the finale will attract a mature audience.

It is in the final act that Samantha's character arc is truly etched and it puts the film in the right perspective.

Maria Maggenti's script is competently written and the film is astutely mounted. There is some nice usage of lighting and colours and the way the scenes are repeated in slightly different ways is consistent, but allows for a bit of creativity. The shot composition of the frames are neat and the synthetic-techno score works well in a modest sense.

The performances are very believable. Zoey Deutch as Sam is cute and makes her character's decisions seem convincing and is a welcome distraction from the perfunctory performances of her close friends. Logan Miller as Kent is lovable and Elena Kampouris as the dejected Juliet Sykes is sincere.

Viewers of this film will have a polarised view.

You would hate it for being slow and repetitive causing you to lose interest in the narrative. Or, you'd love it for being a high-concept film. A film that will hold your interest and thereby touch the right chords in your heart.

Overall, the film accomplishes as a redemption fare that's worth a watch.

Before I Fall Stills

Before I Fall trailer