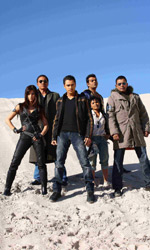 Let`s get one thing straight. This is a film about subverted heroes. People who need big money so desperately they are willing to participate in a crazy game of life and death orchestrated by a man who has turned betting on human beings into a galloping global industry.

Sanjay Dutt strides across the wide screen and its accompanying pomp and paraphernalia with aplomb. He`s accompanied by a cast that knows this film means macho business.

However, the real heroes of this tale of perverse heroism are the action by Allan Amin, dialogues by Soham Shah, locations -- ranging from the super-rugged to the ultra-chic -- the thundering background score by Amar Mohile and the cinematography of Santosh Thundiyil.

All these technical components enrich the experience of watching an extended video-game done at an adrenaline-defying speed.

So is Luck just a series of action sequences threaded together? To a large extent the skills that have gone into Shah`s storytelling tend to be eclipsed by the sheer volume and impact of the virile action. Even the female characters (Shruti Haasan and Chitrashi) are devoted to money and machismo.

So, play the game. Shah displays a penchant for pyrotechnics that hit you in your face and rev up the proceedings from the word go. Every principal character (barring debutante Shruti Haasan) is given a back story done with an economy of narration that impresses with its austere suppleness.

Particularly riveting is Imran Khan`s introductory episode where in a Harshad Mehta-like scam the boy`s life and finances come undone because of his father`s economic misadventures. Here, the character`s desperation of monetary redemption comes alive as much through Imran`s clenched jaws and anguished eyes as the small details that go into constructing an ambience of desperate destiny.

Then there`s Danny Denzongpa, filled with smothered anguish at the thought of a dying wife (Roopa Ganguly) and the millions needed to keep her alive.

Most interesting of all is Ravi Kishan. As a psycho on death row who cheats death, he gets some of the juiciest lines in this well-written jigsaw of fallen lives and scamsters. Kishan makes the best of the situation and comes up with a performance that pervades the screen with a wolf-like wackiness.

Also a treat is Chitrashi, who as the zestful stowaway from Pakistan comes up with a great performance. Her sequence from the hospital bed after mechanical sharks bite off her limb is the sort of foolproof emotional intervention in the rugged plot that cannot go wrong.

You love Shah for making such telling use of Mithun Chakbraorty and Danny`s immense rabble-rousing personalities.

Why didn`t other directors think of casting these actors in such tailor made roles? Like the cinema of Sanjay Gupta, Shah`s film shows materialism to be the motivating mantra of modern times.

Money makes the world of Luck go around unapologetically.

Some of the pauses dividing the five-six principal action scenes don`t quite succeed in giving the goings-on a sense of rhythm and grace. But you can`t really fault Luck for its ration of kinetic momentum. The narration is propelled forward by a pulsating integrity to the genre of action movies.

Original in concept and engaging in execution, Luck is cinema at its macho peak. It pumps up the octane to an optimum level and lets the plot devise its own pauses and porous outlets.

You don`t come away liking too many characters in this tale of guns and deaths. But you don`t dislike these people for their monstrous materialism either. That`s the real success of Luck.

I was told to create scandal to promote film: Advani

Luck is an action, adventure film.The only thing sure about LUCK is that it will change.Following this saying, this film traces the path of various characters and their lives of how with time and circumstances, people`s life change with their changing luck.Luck is a story about this boy, Ram Mehra (Imran Khan), who is burdened by a lot of circumstantial problems, and reaches a point in life, where he has the capacity, but no opportunity, to come out of the mess that unfortunately life has offered him.As they say ``LUCK IS WHEN OPPORTUNITY KNOCKS AND YOU ANSWER``.Something like this happens to Ram, and as he accepts the opportunity, by chance encounters, Ram recognizes his own strengths to pull him through the difficult times that lie ahead.Only he did not know, that the problems do not end, but a game of betrayal and putting his luck at test at every step starts.He has to conquer the hurdles raised by Moussa played by Sanjay Dutt to win this game of Money, greed and the biggest addiction of betting.On his way he has the support of Shruti Haasan, playing his love interest, Mithun Chakraborty, Danny Dengzongpa, Ravi Kishen, Chitrashi Rawat etc.The game of luck begins.