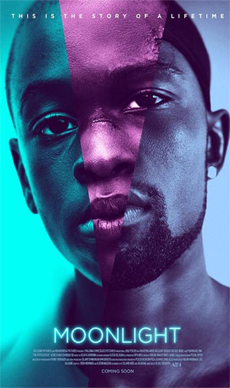 Watching "Moonlight" is akin to getting into the skin of these unfathomably unhappy people. The film has no formal structure. It cuts sharply into slices from the protagonist's life and leaves the shards and splinters strewn across the narration for us to stumble and bleed over.

Not that anyone cares.

"Moonlight" is not an easy film to watch. It doesn't sanitize the protagonist's emotional trauma the way the other Oscar-nominated film "Lion" does. Rather, it opens up wounds that never heal, tells us that the hurt heart never recovers. And that pain, isolation and the pain of isolation are what we must learn to live with.

This is the first film featuring a gay protagonist which doesn't make a virtue of his emotional softness. Little Chiron (Alex Hibbert) living in a tough Miami neighbourhood where drugs and prostitution are a way of life, is constantly bullied for not being able to do 'man' things properly, like playing football and talking dirty about girls.

Chiron's uncertainties are starkly mapped in little Hibbert's face. His tormented eyes will haunt you for a very long time.

"How will I know," as a child, he asks about his own sexuality.

Those tormented haunted eyes follow Chiron's character through two other segments showing Chiron as a teenager when Ashton Sanders takes over the role as though he owns it. Then finally, it is Trevante Rhodes as the adult Chiron, all muscled up to fortify himself from the bullies the Man and Destiny hurl his way.

I remember while filming "Boyhood", director Richard Linklater had waited for the same actor to grow up to film the later parts of the character's life. "Moonlight" cannot afford that luxury. It's a film in a hurry. The narrative is fidgety, restless, nervous, almost impatient to the point of self-ruination. No formal narrative convention is followed. We see chapters from Chiron's life unfold with unostentatious casualness.

The world Chiron inhabits is dark and desperate but never gloomy. Though violent, Chiron's environment is never shown as lethal. Characters carry guns, but no one shoots. Only one character dies. Though pivotal, we only hear of his passing away and that without sentimentality.

Wisely, director Barry Jenkins focuses on the inevitability of heartbreak in a world steeped in anxiety. He works on his protagonist's three life-defining relationships with his mentor (Mahershala Ali), his mother (Naomie Harris) and best friend (Andre Holland) with circumstantial splendour, bringing to each moment of the shared relationship a feeling of being the last.

The narrative seems strangely detached and disengaged, as though it couldn't care less whether we the audience give the characters the attention that they should. It is in the way the characters play out their denuded, disengaged drama that the core of the film's humanism emerges. We never see Chiron's homosexuality as being segregated from his surroundings. The hurt and pain that his sexuality causes are so devastating in their impact because the film seeks no impact,makes no attempt to gain our approval or sympathy.

Everyone will walk away from "Moonlight" with favourite moments. Mine is the sequence where little Chiron asks his mentor-father figure what a 'faggot' means and later, much later at the end of the film when the adult Chiron tells his friend that he has never been touched by any man or woman ever since their one and only sexual encounter ten years earlier on the beach under a moonlit sky.

The one decisive sexual encounter in the film is heartbreakingly furtive cursory and brief.

Funny, how we build the entire screenplay of our lives on moments that may not even be of casual importance to others. "Moonlight" takes us through lives that shed their tears so silently that we are seldom allowed to mourn for, let alone with them. The absence of an elegant structure in the narrative (the last one-third of the film is just Chiron and his friend in an eatery getting to know one another again) strips the narrative of all artifice and conceit.

This is a film that doesn't believe in the rules. It breaks them with no arrogance or pleasure. Just a feeling of deep regret and distant hope.

Emma Stone calls Oscar fiasco one of 'most horrible moments'

Oscar winning actress Emma Stone tagged the Best Picture fiasco at the 89th Annual Academy Awards as one of "the most horrible moments" in her life.Read More