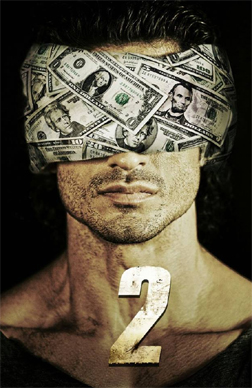 This is the second edition of this action thriller franchise, the first being released in 2013.

In this edition, after the arrest of India's most wanted black money launderer, Vicky Chaddha in Malaysia, Captain Karanvir Singh Dogra, the Commando of the Special Cell, is assigned to accompany the police team to bring him back to India.

While the narrative begins with the recent demonetisation issue, it ends up with how the black money could help the poor deprived farmers of our land. The tale follows Karan as he uses his brain and brawn in planning, crossing and double crossing. The plot is pretentiously complex and convoluted with politicians, businessmen and the police involved.

There are many such moments like these where the film seems to have a crush on its own ludicrousness and is determined to keep the buzz going by never allowing the audience to look or think long enough to poke holes.

Tone is everything. The film is as knowingly unreal as some of the best early 1990s action classics. Like those films, this one is essentially synthetic with a body count. The director has the knack for setting up preposterous action scenes and then cutting away from them so quickly that you can't help but chuckle in disgust.

Also in between a serious action sequence, when Karan asks his team members, "Tum sab theek ho?" What does he expect them to answer... and of course they are.

As for the action sequences, there are plenty, and they suffer the same fate. Karan just crashes through his universe, punching, kicking, displaying his parkour stunts and shooting himself and everyone that stand in his way.

And if you think that "Commando 2" is all about action and nothing else, then you are wrong. There is a plethora of lip locks and for some lighter moments, there is Bhavana Reddy, the encounter specialist, who mouths her dialogues with a Hyderabadi twang. She is used for slapstick effect throughout.

The on-screen vibes of the cast seriously lack chemistry and probably apart from the writing, this is a major drawback of the film. As individuals they are all perfect in their shoes, but on the rack they make odd pairs.

Vidyut Jammwal as Commando Karanvir Singh is sincere, but he fails to be convincing as his character graph is flawed. Freddy Daruwala as ACP Baktawar seems to be a miscast as a team leader. He does not have the persona that balances Vidyut's and thus is not impressive.

Adah Sharma as Bhavna Reddy is perfunctory but effective. She induces ample humour, but over the period, though consistent, the novelty fades. Esha Gupta is lukewarm as the femme fatale quotient Maria. Shefali Shah in a guest appearance is dull and staid.

Sumit Gulati as Zafar Hussain the Cyber Cell Officer who is an expert in hacking, is natural. He portrays his angst and resentment in an understated manner.

The film is grandly mounted with excellent production values. The cinematography is of fine quality, the background score which mostly consists of a rock-n-roll beat, makes the film seem like a frothy and laidback entertainer.

After a week of drudgery at the theatres when we were coaxed into wading through a self-designed epic slush on war and love, it is such a welcome relief to go to the theatres just to have an unpretentious good time. No offence meant. None taken.

Come, unwind with Vidyut as he cracks some serious bones and FERA codes, brings India's wealth back into the country and saves civilisation from catastrophe. All done in the vein of a comic book hero who forgot his cape in transit.

Okay, Vidyut is ambitious, and sorry to say, he can't act. He can fight like a wild untamed beast, though. His reflexes in the action scenes, specially in the hand-to-hand combat with actor Thakur Anoop Singh at the climax on the rooftop of skyscraper, are to die for. Some do. But the deaths are neither gruesome nor bloody. The popcorn never needs to feel guilty in this actioner.

Vidyut's athletic manoeuvres are simply breathtaking. There is just no other way to put it... or simply breathtaking, as his co-star Adah Sharma playing a designer-wear-shopaholic obsessed with rushing to the nearest shopping mall when she reaches Malaysia to crack an international financial scam, would put it.

Adah, in an unusual role for a leading lady, plays the cop as a bimbo with a thick Hyderabadi accent. She is the attention-seeking comic relief in the speedened-up action flick where wheels within wheels are revealed in quick succession, giving us little time to ponder over the improbabilities.

Also impressive is Freddy Daruwala as a cop with ambivalent morality and loyalties. His character goes through almost as many changes as Adah's designer wear. Freddy stays in control of his character even when it proves as slippery as some of the roadways of Malaysia where the handsome film is expertly shot by cinematographer Chirantan Das (who last shot the very different "Tanu Weds Manu").

Esha Gupta's antagonist's act is pouty, provocative and sexy. Her character goes through as many shifts as Shatrughan Sinha's shooting schedules in his heyday. At one point while playing seductive wife to a paraplegic outlaw (Vansh Bhardwaj, who was once brilliant as Preity Zinta's abusive husband in Deepa Mehta's "Heaven On Earth") Esha slinks into Vidyut's bedroom smooches his lips and cooes, "I can go further to save my husband".

The screenplay about blackmoney, demonetisation, and yes, 'desh-bhakti' plugs all the holes in its script with commanding cleverness. The plot is designed as a brick-building toy that moves in a sly sexy slant and manages to stay up there. Writer Ritesh Shah and Suresh Iyer combine political savvy and pulp fiction with much gusto.

And yes, there is even a message about bankrupt farmers at the end, which is a bit hard to swallow.

You really can't take the film's pulp politics seriously. The action is executed with comicbook slickness. The film avoids song breaks. And miraculously for a political thriller, there's no item song either.

Even more miraculously, in spite of the film's overt nationalistic pitch, the national anthem doesn't play even once in the narrative. Except for the entire cast getting together for the end-titles jiving "Hare Krishna hare Rama".

Don't miss this galloping concoction of 'desh-bhakti' and pulp tourism. Oh yes, there is also the very lovely Shefali Shah playing a politician with mutating loyalties who must protect a wayward son (Suhail Nayyar).

Shades of Shabana Azmi's "Godmother" in a film that clearly owes allegiance to the spy thrillers of Ravikant Nagaich. Vidyut is Jeetendra from "Farz". Far more agile and athletic but, alas, far less appealing.

Actress Esha Gupta says working on her maiden Iranian project "Devils Daughter" has been a surreal experience.Esha has been shooting in Mumbai since a month. She will be shooting for the project in April and most of the scenes are shot in Madh Island.She is happy to work with Ghorban Mohammadpour, who has helmed films likes "Salaam Mumbai", "Anche Mardan Darbareye Zanan Nemidanand" and "Dele Bigharar". Read More

Actress Adah Sharma is making her acting and singing debut in Tamil with Prabhudheva's "Charlie Chaplin 2".Adah, who last featured in "Commando 2" in Hindi and in "Kshanam" in Telugu, has learnt Carnatic music for 10 years.On the song she has sung for the Prabhudheva-starrer, Adah said in a statement: "I'm very happy that 'Charlie Chaplin 2' is my debut in Tamil. My dad was always keen that I do a Tamil film. Director Shakthi, producer T Shiva and music director Amrish thought I would be perfect for this song. Tamil is my mother tongue, so this was fun."Read More

India’s most wanted Black Money agent Vicky Chaddha gets arrested in Malaysia and is kept in a safe house by the Malaysian authorities along with his wife. A team of four is being sent to Malaysia to bring them to India. Apart from the growth of inter-personal relationships, the mission comprising major action sequences, has quite a few twists & turns on it’s way. How Karan (Vidut Jammwal) uses his brain and brawn to recover all the laundered black money, forms the rest of the story. 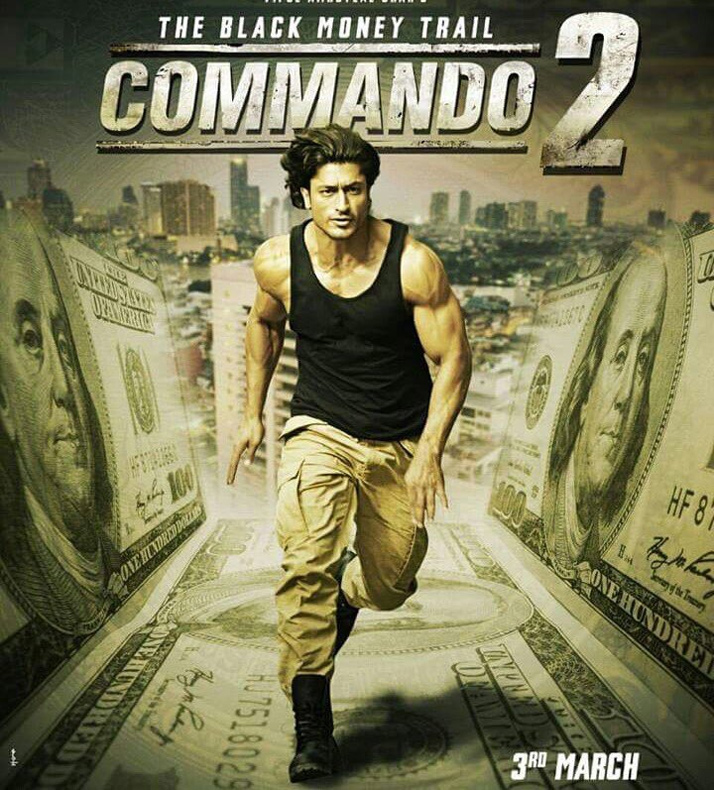 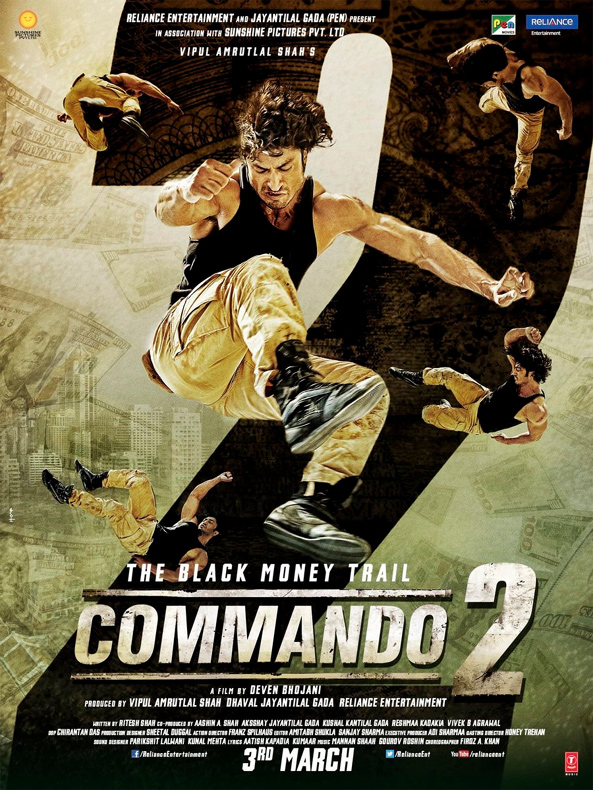