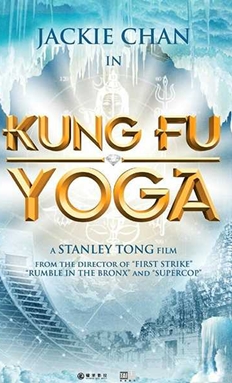 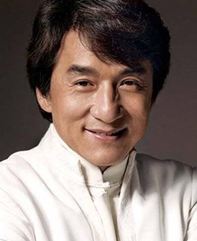 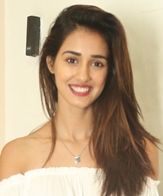 The title conjures an exciting amalgamation of practices of world's most ancient and traditional civilisations -- Chinese and Indian martial arts with the spiritual and ascetic discipline of meditation, breath-control and body postures for health and relaxation. But alas! These elude you in the film.

Kung fu and Yoga are probably what the cast and crew of the film intended to indulge in while making the film, but landed up having fun and frolic on the sets. And, this is what reflects in the end product -- a mishmash of ideologies and a B-grade entertainer. It is an ungainly action-adventure that ties the Chinese and Indian film industries together.

Released in Hindi and English, the film is steeped in a superficially crafted history. The narration begins with an ostentatiously impressive slapstick fight scene in motion capture animation reiterating the tale of Wang Xuance, the envoy of the Tang dynasty to India, who defended the Kingdom of Magadha from its rebellious general Arunasava. This prologue forms the back story to the contemporary setting.

The plot, though convoluted, begins in present day China, where Jack is a reputed Chinese archaeologist who has invented an infra-light technology to study ancient artefacts. He is approached by an Indian princess and her younger sister who are impersonating a history professor and her assistant, to read a vintage map which was left by her ancestors. They claim that the map would lead them to the lost treasures of their ancestors.

Paying tribute to Indiana Jones, Jack along with the princesses, a treasure hunter Jones and an oil-drilling expert Jianhua, land in the Kunlun Mountains where they find the cave along with the treasures. But soon, Randall -- a descendent of Arunasava -- arrives with his cronies to lay his claim. A cat and mouse chase ensues, till both the parties are fatigued with the shenanigans.

The story is a flighty and frivolous reboot of a number of earlier treasure hunt films. The screenplay and dialogues are too skewed to cater to the mindless frontbenchers ogling at the colourful sets and slapstick kitsch. Among the dialogues that stand out is when Randall tells Jack, "Stop boring me with your superstitions" -- when he actually meant, stop boring me with your lessons in astrology.

Also with just one reference to yoga, the writing along with the incoherent screenplay weights down this caper.

But what keeps you glued to your seat are the kinetic, by-the-numbers action sequences strewn throughout the plot along with the slapstick humour that accompanies the action.

Jackie Chan has the star charisma, but he lacks the energy and vitality to carry the action thriller on his shoulders. He is aptly supported by his co-stars but then, they lack magnetism. Their actions by far are perfunctory, nevertheless, they leave a mark onscreen. Impressive among the few are Disha Patani and Amyra Dastur as Asmita and Kyra - the Indian princesses, Arif Lee Rahman as Jones, Eric Tsang as Jianhua and Yixing Zhang as Jack's assistant Xiaoguang.

On the other hand, Sonu Sood as Randall, is totally mediocre.

On the production front, the camera work, editing and sound design are of ace quality. But with a potpourri of races; Caucasian, Chinese, Aryans and Dravidians, interspersed on the screen the film looks like a confused composition especially during the stunts and dance sequences. The locales too seem to be far from authentic. Tacky in appearance, they seem to be studio created.

All in all, the film is a time-pass B grade entertainer.

The worst crime you can accuse a Jackie Chan film of is silliness. "Kung Fu Yoga" is supremely silly. But like Jackie's films in the past, it is a whole lot of fun if you are in the mood for some goofy antics.

The film's utterly implausible plot opens with a great big "Baahubali" styled battle between Chinese and Indian forces. I suggest you hold your horses... err... elephants, because the preamble is most decidedly not the best of beginnings for an adventure saga that veers from the violently unbelievable to the intensely funny, sometime achieving the extremities in the same sequence.

But that's Jackie Chan for you. The merger of mirth and mayhem in his personality is achieved with so little stress and so much exuberance that it takes very little for us to believe this super-entertainer is still enjoying himself, dishing out the dolled-up drollery with the devilishly disarming joy of self-discovery.

For the record, Jackie Chan is, don't laugh, an archeologist this time. Not that it matters what he plays. No matter what his vocation, the mission is to set the world right, break bones and bridge fences. This time, he is surrounded by a bevy of nubile Chinese and Indian beauties who have nothing better to do than to giggle and wriggle and sometimes throw in a few punches.

The punches and the punchlines belong to Mr. Chan who still speaks a queerly exotic English. Many of his dialogues with his Chinese co-stars are meant to be in their native language. Strangely, instead of subtitling, the Chinese lines are dubbed into English, so that the humour of linguistic misapprehension is completely lost in translation.

At one point, Disha Patani (playing an Indian princess with little to do except look pretty) says, "I didn't understand what you said" to two characters who are meant to be talking in Chinese but are actually heard by us in English.

Never mind. This is mindless entertainment at its brainless best, topped up by a kind of foamy salute to Indo-Chinese kinship that would at best, be as serviceable as a picnic up the Himalaya where revellers from both the countries are invited.

Their conflicts are shot with the winking aplomb of a war in which no one really gets hurt. And just to prove that it's all in fun -- "silly fun" -- Chan and Sood break into a big Bollywood dance at the end with Chinese and Indian girls in bright yellow sarees shaking their shoulders and heads with touristic relish.

The action sequences are far superior to what we see in our own films. There's an awe-inspiring underwater sequence with Jackie and Disha which is shot with the breathless languor of a lama riding across the Great wall. The extended car chase in Dubai which includes a roaring lion on a ride with Chan, is majestic and spectacular, better than any stunts on the road I've seen in recent films. Rohit Shetty, please note.

But my favourite action scene doesn't involve Jackie Chan at all. It features Amyra Dastur (who is as useful as the plot as toppings to a pizza) and two Chinese actors trying to dodge a deep well filled with hungry hyenas. The lengthy heart-in-the-mouth sequence is shot like a video game. Aarif Rahman, who plays Jackie's nephew, fights like Chan and can also act. The next martial-arts hero from China?

"Kung Fu Yoga" is one wild wacky goofy adventure saga. It isn't fodder for the intellect. But it sure as hell is a lot of fun.

Chinese archeology professor Jack (Jackie Chan) teams up with beautiful Indian professor Ashmita and assistant Kyra to locate lost Magadha treasure. In a Tibetan ice cave, they find the remains of the royal army that had vanished together with the treasure, only to be ambushed by Randall (Sonu Sood), the descendent of a rebel army leader. When they free themselves, their next stop is Dubai where a diamond from the ice cave is to be auctioned. After a series of double-crosses and revelations about their past, Jack and his team travel to a mountain temple in India, using the diamond as a key to unlock the real treasure.