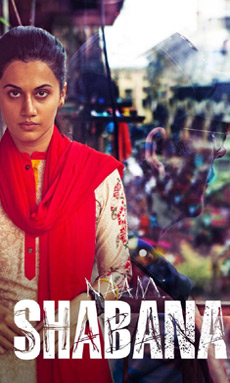 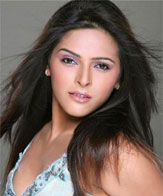 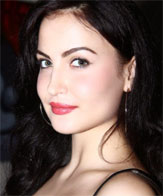 For a superstar who gallantly steps back to let the female hero of this gripping-from-the-word- go thriller, take centrestage, it is rather unchivalrous of Akshay Kumar to be billed in the end-titles before the awesome Tapsee Pannu.

She rules the bustling intrigue-filled universe of this film.

After "Pink", Tapsee is again in startling form as Shabana Khan, an ordinary girl with extraordinary resilience who, when pushed into a corner, hits back. Hits back really hard.

The thing about Tapsee is, she is never caught acting. I could only see this steel-willed imperturbable spunky girl onscreen. Shabana is seen to live in a crowded Muslim locality of Delhi, shot by cameraman Sudhir Palsane with rigorous authenticity. As Shabana strides across the screen with a confidence that comes from a place opposite to emotional/economic security, we sometimes catch passersby staring at her. This could be gawkers looking at Tapsee. Or Shabana's neighbours watching her in admiration.

"Naam Shabana" takes the risk of exposing itself to crowds. A lot of the gripping narrative unfolds on crowded streets. Nair cuts the scenes in motions of anguished urgency where we at once sense the protagonist's need to avenge the wrongs done to her in the past and in the immediate here-and-now.

"Naam Shabana" constantly runs on two levels. The backstory to the espionage drama is bolstered by the heroine's constant wrestle with her conscience. Shabana wants to let us into her feelings. But the minute we accept her invitation, she clams up. Tapsee plays this introvert with a compelling combination of reticence and transparency.

It is a remarkable performance but then this is a remarkable film. The two halves of the narrative are almost like two different films, both equally irresistible. But constructed under differing circumstances. The first half is devoted to building a relationship for the loner heroine with a boy(Taher Mithaiwala) who won't take no for an answer, and then dismantling her hope for love. The second-half constructs a brisk bracing spy thriller with Malayalam star Prithvi Raj pitching in a gritty menacing turn as a nasty international villain.It is here that the action explodes on the screen with optimum impact.

It all comes together in ways that are both unexpected and satisfying with Manoj Bajpayee playing the mouthpiece of a faceless governmental organization that recruits spunky fearless youngsters to fight battles that cannot be fought legally. I wish the scenes featuring Manoj and Tapsee were fleshed out with more fury and less sardonicism.

In what could possibly be the most revealing dialogue on the Islamic identity in times of terrorism, Manoj's character explains to Shabana Khan how her Muslim identity can be helpful in infiltrating restricted areas of counter-constitutional activity.

The scenes are cleverly written and Akshay Kumar's extended cameo is a sure-shot crowdpleaser. The film also has some savagely funny moments. At one point when that very fine actor Zakir Hussain is spying on a bikini-clad woman while holding back his urge to pee, he exclaims his organ has grown "confused".

Providentially "Naam Shabana", for all its intricate twists and turns, remains almost entirely bereft of any confusion. It is a lucid and tightly-wound piece of cinema with a central performance that is pitch -perfect and freed of gimmicky shots at militant feminism. I wish director Nair who reveals such an explosive flair for fusing personal and political statements would have avoided the club songs that come on at points where we can almost hear the makers telling one another, 'Yahan pe thoda relief daal do'.

But there is no need. "Naam Shabana" is a film of rude awakening, reminding us how much maturity in vision treatment execution and the performances, a film can achieve provided it stops looking for reasons to make audiences happy. Watching this film is a joy, although nothing really happy happens to Shabana. We are just happy that she can fight her own battles even when the odds are stacked skyhigh against her.

"Naam Shabana", a spin-off from the 2015 popular film "Baby", is purported to be an action thriller where Shabana Khan (Taapsee Pannu) is a middle-class girl who lives with her mother and has a devoted boyfriend, college mate Jai (Taher Shabbir).

An incident one night convinces her to put her martial arts training to use and she chooses to follow an uncharted path thereon. How she joins an intelligence group to save her country from unwanted elements beginning with a global arms kingpin, forms the crux of this two-hour plus film.

This is a film which exudes an aura of intrigue and being much-anticipated, one goes in with a lot of expectations. But alas, the first half which starts with a fair amount of promise and an emotional quotient, degenerates into a mindless action film which fails to grip you and drags. The weak and far-fetched plot meanders aimlessly, hinged on a weak motive both of the protagonist, Shabana as well as the intelligence group she works for.

The action scenes are expectedly well-choreographed and executed, but lack freshness as these offer nothing new. The foreign locales too don't help in elevating the film. The characters, perhaps with the exception of Shabana, whose back story is shared to make her look complete, are all one-dimensional and appear out of nowhere. The dialogues are trite and lack punch.

The film is Taapsee's canvas all the way and one must laud her martial arts prowess and hard work which shines in the action sequences. Her feisty persona and agility are praiseworthy. But that is where it ends. She fails to make an impact when she emotes and the scene during her childhood, when she witnesses her parents fight, is particularly tacky and unconvincing.

Prithviraj Sukumaran as the arms dealer Mikhail aka Tony, has a strong screen presence and portrays his character with conviction.

A melee of good actors appear for no real reason at all and naturally fail to impress owing to the poor script and characterisation. Anupam Kher and Danny Denzongpa in a miniscule role, are wasted.

Even Akshay Kumar's presence as fellow agent, Ajay seems forced and uncalled for. Manoj Bajpayee, as the mysterious 'Sir' with no name, who tracks and appoints Shabana has nothing much to offer by way of histrionics and neither does he appear comfortable in the skin of his character, merely mouthing patriotic lines.

Taher Shabbir as Jai, Shabana's boyfriend, is earnest and endearing. The actor playing her mother too is competent.

The music too is nothing to boast about and in fact the background score creates an unnecessary din, drowning everything else. "Rozana" by Shreya Ghoshal, is however, pleasant.

Overall, "Naam Shabana" tries hard to be an action-packed woman-centric film and while it lets Shabana deliver the last punch in the predominantly male bastion in which she supposedly shines, it fails to convince.

Don't want to closet myself in one type of role: Taapsee

From portraying strong characters in films like "Pink" and "Naam Shabana" to doing glamorous roles in "Judwaa 2", Taapsee Pannu has a diverse career graph and she would like to maintain that in future.Read More 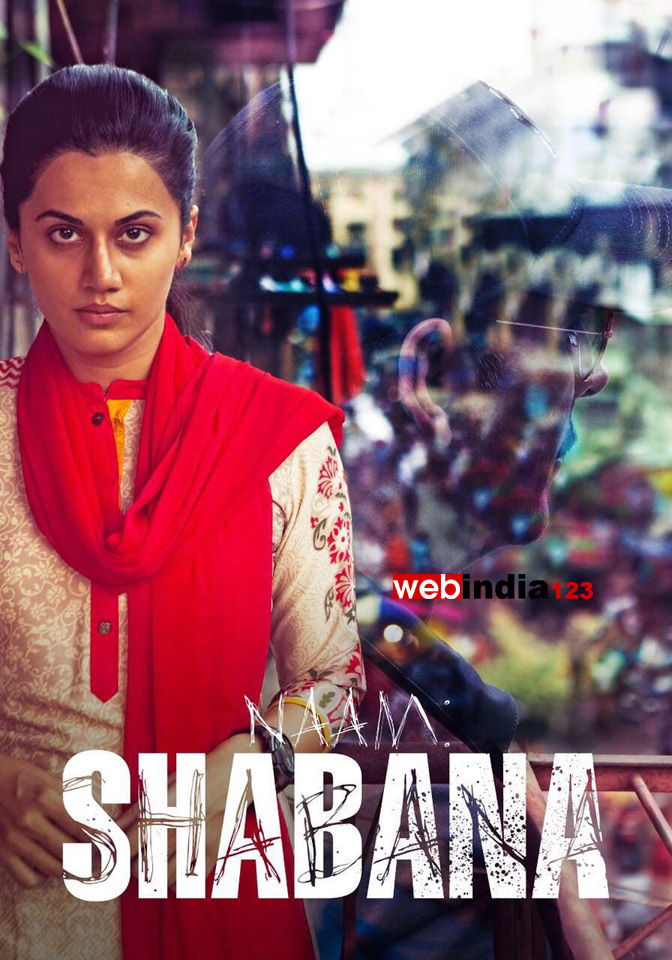 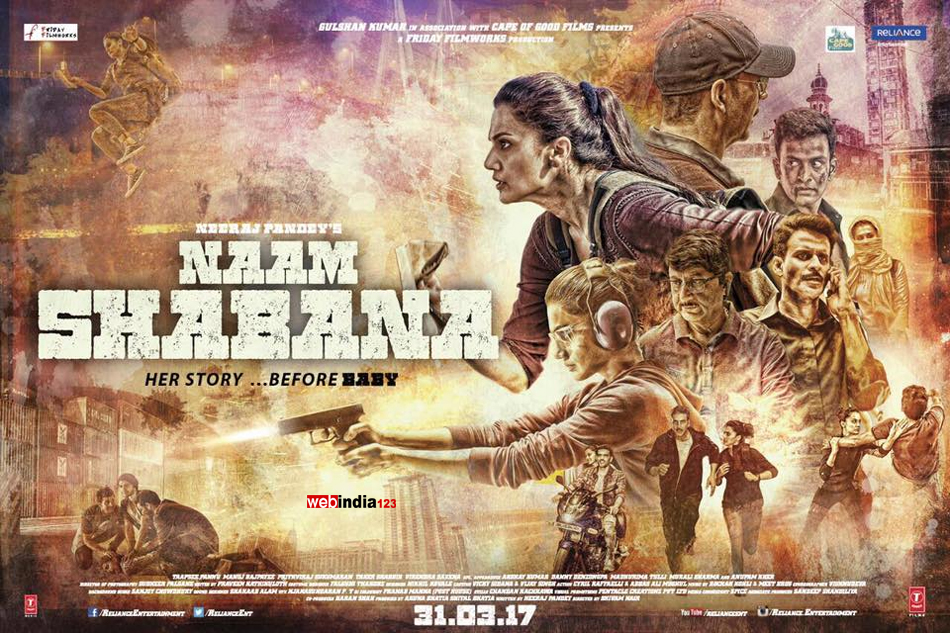 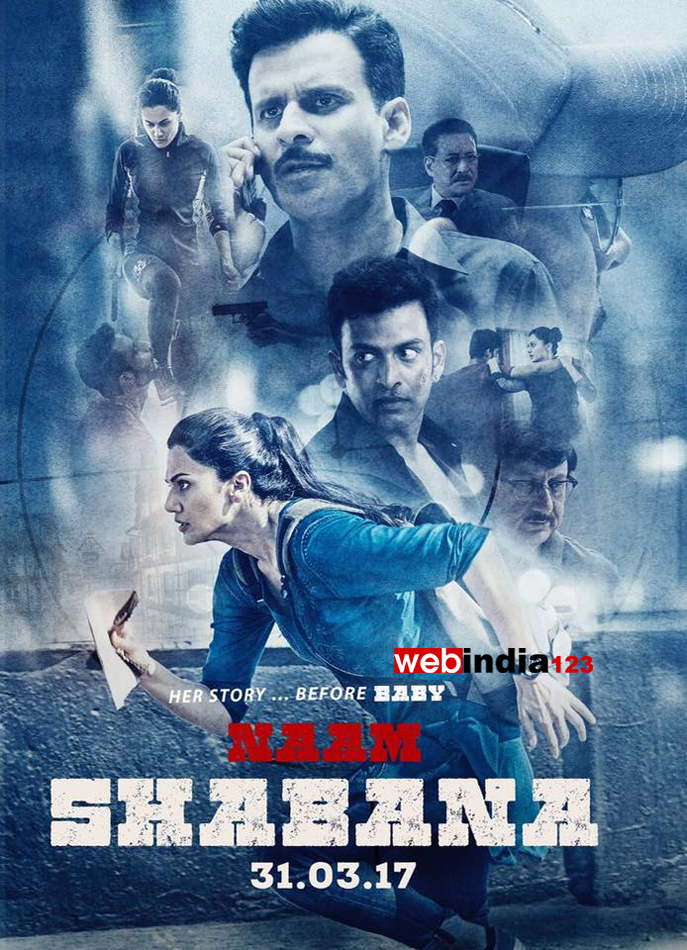 Every whisper every scream
All real can make my song dance

Every whisper every scream
All real can make my song dance 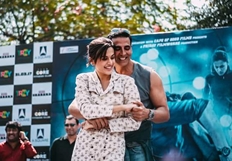 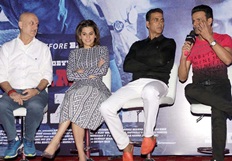