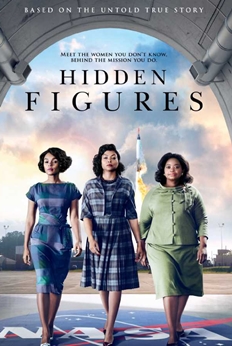 Based on the non-fiction book of the same name by Margot Lee Shetterly, "Hidden Figures" is a biological drama that pays tribute to remarkable Afro-American women who broke colour and gender barriers at the National Aeronautics and Space Administration (NASA).

Set in the early 1960s during the space race with Russia, the film revolves around three boffins: Katherine Johnson a math prodigy, Dorothy Vaughan, a computer expert with leadership qualities, and Mary Jackson, an aspiring engineer They worked during the phase that was responsible for putting the first American astronaut John Glenn into orbit and return him home safely.

The three friends worked in different departments of NASA during the time where black people had to sit in the back of the bus and use separate bathrooms. How they battled for their civil rights, forms the crux of the tale.

Apart from the few historical inaccuracies, the film captures the early days at NASA where racism and sexism was unabashedly rampant. It astutely and impeccably navigates the issues to highlight how the US has transformed to become a society it is, thereby creating a patriotic euphoria among Americans.

Taraji P. Henson as Katherine, Octavia Spencer as Dorothy and Janelle Monae as Mary are all brilliant. They portray their parts earnestly and have their moments to shine. But the focus is naturally on Henson and she stands out among the three. She shares some good screen space with Jim Parson and Kevin Costner.

Parson as Paul Stafford, Katherine's grumpy and irritable, racist colleague, forever trying to snub her, is tolerable. Kevin Costner as Al Harrison, the pressured Departmental Head of the Space Task Force, along with Mahershala Ali as Mary's husband Jim, and Kirsten Dunst as the racist Vivian Mitchell, deliver effective performances.

But what diverts your attention during the performances is the pristine, old school filmmaking, which is overtly glossy and synthetic. Cinematographer Mandy Walker's frames are picture perfect and they blend well with the computer generated images. Wynn Thomas's production designs and Renee Ehrlich Kalfus's costumes look authentic and period perfect with the rich hues and demonstrative designs, but they lack the grit of realism.

Even on the directorial front, every move is really vivid and expressive when it comes to showing us math equations, but the writing does not give us that level of personal detail of the individual trauma of the trio.

Overall, straight-laced and easily digestible, this one seems like a forced feel-good film.

Indian-origin British actor Dev Patel on Sunday took home a BAFTA Award for the Best Supporting Actor for his performance in "Lion" -- a film about an Indian boy -- which also got the Best Adapted Screenplay honour.Read More

HIDDEN FIGURES is the incredible untold story of Katherine G. Johnson (Taraji P. Henson), Dorothy Vaughan (Octavia Spencer) and Mary Jackson (Janelle Monáe)—brilliant African-American women working at NASA, who served as the brains behind one of the greatest operations in history: the launch of astronaut John Glenn into orbit, a stunning achievement that restored the nation’s confidence, turned around the Space Race, and galvanized the world. The visionary trio crossed all gender and race lines to inspire generations to dream big.