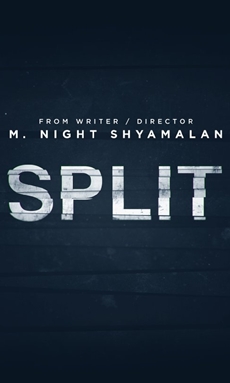 A survival thriller anchored by a mesmerising performance by James McAvoy, "Spilt" is the tale of a man with an identity disorder.

Kevin is living with 23 different personalities in his head. One of them, Denis, kidnaps three young ladies; two popular and well-adjusted friends (Haley Lu Richardson and Jessica Sula) and the introvert and troubled teen, Cassie (Anya Taylor-Joy). The girls wake up locked in a basement with no idea where they are and who they are dealing with.

Over the period of their imprisonment, some of the personalities the girls have to deal with are: Barry - a fashion designer, Hedwig - an impish child, Patricia - a steely woman devoted to order and Dennis - an imposing personality.

The altered personalities, or "alters" as they are called, are preparing for the arrival of a new persona, one they refer to as simply The Beast. And sacrifices are needed for his coming.

To make the film seem wholesome, there are scattered interruptions from Kevin's shrink and some flashbacks from Casey's childhood, which work as the backstory.

The story kicks off immediately without any fuss, but very soon you realise that while the premise is intriguing, the missing grit in the plot makes the film yet another hollow overture of a horror thriller.

It is only near the end when Kevin sees the scars on Casey's body and stops himself, telling her, "You are different from the rest." And he roars, "Rejoice! The broken are the more evolved! Rejoice!" You realise that there is a faint layer hidden that makes "Split" a meaningful film.

In other words, though the central character of the film is a man with a split personality, the film also tells the story of a split in the world, where a young woman is able to combat evil because of the strength she has developed from her dreadful personal trauma in the past.

With the crude principle of 'what does not kill you makes you stronger', the film elaborates on the suggestion that knowledge to survive comes with an unbearably high price as it shows how "normal" women are left vulnerable, unprotected and ill-equipped to fight for themselves.

In terms of tone and execution, the film is more of a thriller than outright horror. Also, although the director indulges in the genre elements, he does not commit to it seriously. He treats the premise and the danger the girls are in with great seriousness, but the plot still skirts the issue light-heartedly, making the entire process staged and far from being an immersive experience. The climax too wavers from serious to seriously ridiculous.

McAvoy delivers an astonishing chameleon-like performance as he transforms himself again and again, finding different ways to be creepy and menacing, never overdoing the same note. The camera captures his oddities, allowing us to nervously laugh, especially during the introduction of Patricia or as Hedwig, where he uses a lot of faux grave facial expressions.

Taylor-Joy is natural in a restrained performance as Casey, playing a scared and scarred young woman but a fighter worth rooting for who rises to the many challenges.

The rest of the cast are merely perfunctory.

Overall, the film is too contrived to be taken seriously.

So all right. We know this is a thriller about a kidnapper who assumes 23 personalities.

But would the real Manoj Night Shyamalan please stand up? Is he the director who turned around the very definition on screen thrills and horror with "The Six Sense", followed it up with the riveting "Unbreakable", and then slid downward into a seemingly fathomless pit of mediocrity with one disaster after another.

To be honest, one thought "The Air Bender" to be a kind of closure on Shyamalam's career as a spook merchant. We thought it couldn't get any worse. In how many more ways could Shyamalan tell the same '...Sixth Sense' story over and over again? The eerie became progressively dreary in Shyamalan's oeuvre.

"Split" sees the return of Shyamalan to form. It is an unabashedly populist thriller conceived and designed to make us eat out of the director's hand. It gives us a startling anti-hero who inhabits many personalities. As played by James McAvoy, Kevin is sinister and scary. Or, so he would like us to believe.

Without wasting a single moment, Shyamalan gets to the business at hand when three girls are kidnapped by a man who looks strange... yeah, strange and driven almost to a Satanic pitch of disintegration and fury. Immediately we know the focus of attention here is Casey, played by Anya Taylor-Joy, a prized discovery.

How do we know Casey is more important to the plot than her two kidnapped friends? Because she sits in the front seat with the kidnapper while the other girls bring up the rear. Yes, "Split" is that kind of a spoon-feeding delight where subtleties are sacrificed for the sake of a frantic celerity. Improbabilities and absurdities are blissfully invited into the plot throwing open the question of art subverting a serious psychological disorder to titillate the audience.

Most of the film's relentlessly riveting two-hour playing-time is a cat-and-mouse game between Taylor-Joy and Avoy, as predictably, the two other girls drop out of the narrative in conveniently spaced-out interludes that suggest a direct link between horror and psychological disorder. No one dies a horrible death. The girls are not sexually assaulted by Kevin, though ironically one of them is attacked routinely in the "normal" world outside her captivity.

Yes, Hitchcock's Norman (from "Psycho") got there first. As played by the Scottish actor McAvoy, the spaced-out Kevin often comes across as a histrionic show off. Many of his personality transformations are undertaken in the spirit of auditions and showreels.

The 23 personalities that McAvoy is said to assume remain provocative ideas underscored by a chilling insinuation. On screen, the myriad personalities come and go with fleeting promises of a more precious truth about a mind that embraces multiple personalities. Tragically, that larger truth which we wait for, is compressed and compartmentalised to provide us with that thrill-a-minute experience which breathes down Shyamalan's downspiralling career's neck.

Many times we end up as confused by McAvoy's very impressive show of acting chops as his therapist played by veteran actress Betty Buckley. A bad-hair day version of Judi Dench, Betty has a role that is the feeblest and most unconvincing thread in Shyamalan's plot. Dr Fletcher holds the key to Kevin's mind-blowing intellectual somersaults. Rather than behave like a responsible member of the medical fraternity, she behaves like any woman in any cheesy horror film walking straight into the dangerous criminal's Google-free lair.

Needless to say, the shrink with her shrunk vision gets bumped off. No, this is not a spoiler. It's a horror thumb-rule.

To his credit, Shyamalan never loses grip over the narrative even when the surprise element slackens and slows down and finally whittles down to a zero. "Split" is remarkably assured in following the rules of a solid cat-and-mouse thriller. The attempts at bringing in a psychological heft by trying to align Casey's current captivity with her childhood predicament is, at best, tenuous.

But then as Bruce Willis's "surprise appearance" at the end of the film proves, life has a way of coming a full circle. That goes for the thriller genre and for those who practise it.