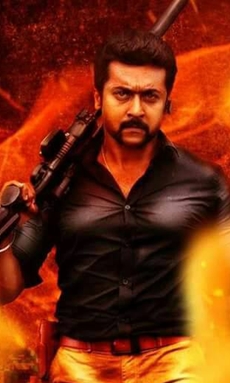 Don't let the agitated agile ambience of unlimited energy fool you. This is a work of illimitable laziness. The writing is slothful, so much so that it often as though the script is a pretext for the fights. The direction is a muddle of rapidly moving shots with no room for the dialogues and characters to grow.

It chokes the breath out of the actors. The performances are so over-the-top, they topple over and fall into the territory of unintentional humour.

The overwrought film opens with a parliamentary session in Andhra Pradesh where there are name plates in front of political dummies with announcements like 'Opposition Leader'.

There is a law-and-order and situation in Hyderabad and Tamil Nadu's 'super cop' Singam must be brought in.

At this point in the passionately heroic plot, the entire audience began to cheer, clap and whistle in anticipation of Suriya's grand entry.

Suriya's introductory fight on a railway station has goons being fist-flown into space like flying saucers while a wide-eyed open-mouthed Shruti Haasan watches the tumultuous 'tamasha' and even rushes to Singam for his autograph. In case we think she's playing a workless bimbo, Shruti is a journalist out to trash Suriya's reputation with an expose that goes way off the mark.

Sickeningly self-glorifying the corrupt 'system' is here no more than a pretext for Suriya to unleash his own brand of brutality laced with dialogues that run across the lengthy film with ear-splitting emphasis. In a fight in a car park, a goon who misbehaves with a lady, is lectured on respecting women.

I was taking notes. There was blood on the floor and mayhem on the horizon as Suriya packs the punches with rapid-fire motions to rival the questions and answers on Karan Johar's talk show.

Elsewhere, the film's main villain catches hold of a Caucasian woman's head and bangs it (the head) and the rest of her, all over the glistening floor. This is what you get when you leave your country to seek work in Indian cinema.

Not willing to let go of his fans' expectations for even a second, Suriya spins and somersaults in muddy action scenes and snazzy dance floor numbers. The plot sinks its teeth all the way from Hyderabad to Sydney with stopover at various waste lands where the NRI villain has dumped toxic ingredients.

Yeah yeah, we know the feeling of being dumped with waste material.

"Si 3" feels like the leftovers from the first two parts assembled together in a hyper-strung display of brute force. The fights are so amateurish in execution that we never get a chance to see the film's superstar-hero do anything that is within the outer limits of believability. Throughout the tedious tribute to outlawry Suriya's "Singam", never wears a khaki uniform -- perhaps indicative of his superior law-providing status.

The film is filled with forgettable goons and policemen who behave like buffoons; yelping, screaming and dancing around the police station like tribals on a night out of revelry.

Everyone in the film seems pumped up with medication that has nothing to do with good health. The two leading ladies come and go wearing looks of unadorned adoration each time Suriya passes by. We know Anushka Shetty playing Mrs Singam with an expression of condescending devotion, is in this film because she was in the other segments of the franchise. But what is Shruti Haasan doing here?

More to the point, what are we supposed to be doing in a film that drags a franchise by its neck to a point of no return? With his talent for character makeovers, Suriya deserves a lot better than this. And so what if this is a successful franchise? "Singam" feels as tasteless rubbery and redundant as A chewing gum that's been in the mouth too long.

You can't spit it out because the ushers are watching.

Actor Suriya might team up with filmmaker Sudha Kongara for a yet-untitled Tamil project which is currently in the discussion stage, a source said.Read More 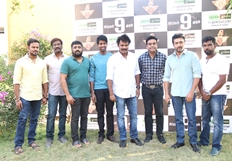