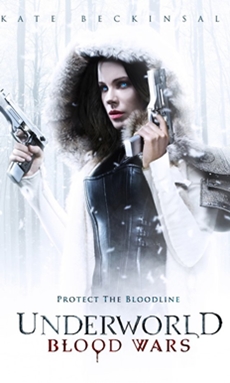 
An action horror drama between Vampires and Werewolves, 'Blood Wars' is the fifth edition of the Underworld franchise and is a sequel to the 2012-release 'Awakening'.

The screenplay, written by Cory Goodman, is based on the characters created by Kevin Grevioux, Len Wiseman and Danny McBride.

The plot is a poorly developed, tried and tested formula of a survival drama. Holding the thread of its franchise tale, in this edition, the narrative follows Selene (Kate Beckinsale) -- The Death Dealer, who is a hybrid Vampire. It is her struggle against the werewolves known as the Lycan Clan and the Vampire faction who betrayed her.

The conflict between the Lycans and the Vampires is legendary.

On the other hand, the Vampires, headed by Marius (Tobias Menzies), are desperately trying to locate Eve, Selene's daughter, as they believe that her blood will help them become stronger.

So after hiding her daughter, and in an attempt to end the external war between the Lycans and the Vampires, Selene joins hands with David (Theo James) and his father Thomas (Charles Dance). But then that's not all. There is a power play, with the ambitious Semira (Lara Pulver) -- a vampire elder who is a leader of her own coven. She tries to gain control of everyone with the help from her manipulative lover, Varga (Bradley James).

On the performance front, since the action takes place in the abstract underworld and the characters are not humans, the actors perform perfunctorily and it is hard to emotionally invest in them.

Directed by Anna Foerster, the film is technically savvy with impressively shot frames, brilliant edits and matching background score. But unfortunately it lacks depth in the scripting department. The plot flows through a lot of familiar points which include full-on extensive action sequences and verbose lacklustre expositions that consist of on-the-nose dialogues that lack punch or passion. This gives the film an obsolete generic feel.

Visually, the camera work by Karl Walter Lindenlaub is commendable. There are a few lengthy unbroken shots that are smooth and impressive. But the slickly mounted moody shots that capture the gothic locales and action get lost in the passiveness of the narrative.

Peter Amundson's razor sharp edits are brilliant and so is Michael Wandmacher's music.

Overall, the film is a wasted opportunity that may appeal only to fans of the vampire genre or those who follow the franchise.