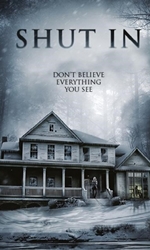 Horror films leave an indelible mark on its audience when, they are ground-breaking, edgy, deep and engaging -- either by performance, story, direction or photography -- and they resonate long after the first viewing. Unfortunately, director Farren Blackburn's latest film "Shut In" offers nothing to ruminate.

To digest "Shut In", you may have to shut out your powers of reasoning. For, despite a fairly reasonable cast, this film is an astonishingly hollow thriller. While it delivers its moderately effective jump-scares, it completely ignores the story's looming, daunting psychological and emotional ramifications.

The narrative revolves around Mary Portman (Naomi Watts), a clinical psychologist specialising in troubled children. She lives in a large, rural house with her teenage stepson Stephen (Charlie Heaton) who has been paralyzed neck down, after an accident and with no chance of an improvement.

Feeding and bathing the motionless young man, Mary lives a solitary life till one of her young patients, the nine-year-old Tom (Jacob Tremblay) unexpectedly turns up at her door, in fact, in her car, one cold winter night. But, before she can return him to his caretaker, Tom disappears. What follows is Mary's nightmares and troubled vision.

Believing her house to be haunted, she contacts her mentor, Dr Bennett Wilson (Oliver Platt) with whom she communicates via skype. He assures her that she is suffering from Parasomnia. And, director Farren Blackburn offers more to this, making the story far-fetched.

With all ingredients of the horror genre like a large house in a rural area set in a snow-clad winter and with characters endlessly searching for things in the dark along with nightmare sequences and a few cheap, lazy jump-scares, the script by Christina Hodson is lurid and unconvincing.

Naomi Watts, stuck in a pool of sad B-grade films, as Mary, is engaging and appealing as always. She does the best she can, but with a weak script, there is little, she or any other actor, can do. She is ably supported by the rest of the team.

Charlie Heaton as Mary's stepson Stephen and Oliver Platt are both perfunctory.

Alex Braunstein as Mary's patient Aaron and David Cubitt as his father who makes romantic overtures to Mary are wasted with limited screen time.

Jacob Tremblay, after featuring in the Oscar-nominated role in the psychological drama "Room", plays yet another emotionally troubled child. With his innocently bewildered looks, he has a magnetic screen presence. Unfortunately, with a poorly etched character, he does not have much to offer, in terms of performance.

With moderate production values, the film is technically polished with Paul Denham Austerbeery's vivid production designs that are realistically captured by Yves Belanger's efficient cinematography. Nathaniel Mechaly's score desperately tries to elevate the viewing experience. The edits by Baxter and Maryline Monthieux, flawlessly camouflage the fault lines in the narrative.

Overall, "Shut In" is mediocre fare.

A heart-pounding thriller about a widowed child psychologist (Naomi Watts) who lives in an isolated existence in rural New England. Caught in a deadly winter storm, she must find a way to rescue a young boy before he disappears forever.